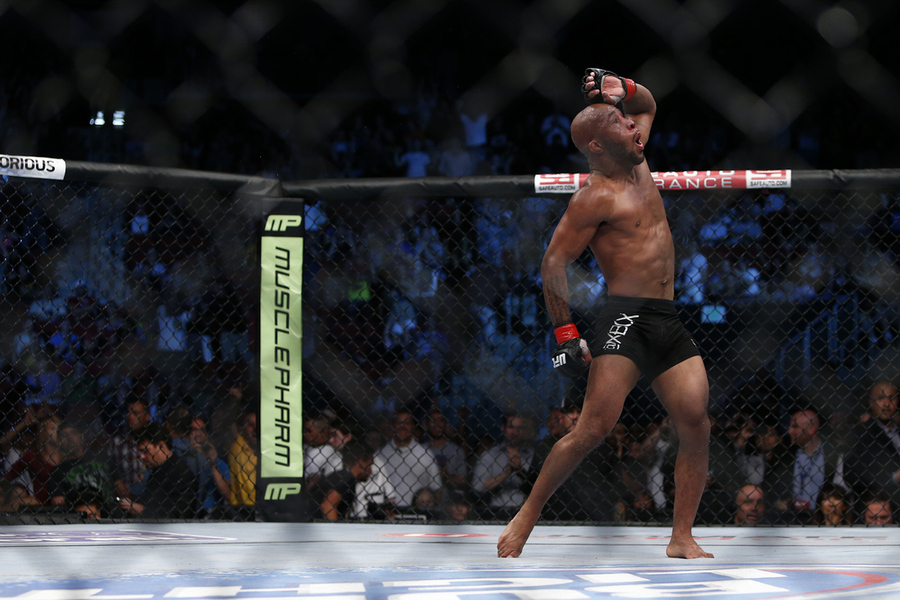 Some MMA fans have no reservations about spending $55 for every UFC pay-per-view event. For these fans, the ability to watch a night of fights in the comfort of their homes is worth the extra line-item in their monthly budget. Others, however, prefer to spend that money on food and drink at the local Spicy Crazy Wings while the promotion’s premium cards are displayed across the restaurant’s many large-screen televisions. These fans not only get to direct their hard-earned dollars in a more tangible way (i.e. beer), but also get to share the experience of a UFC event with other interested fans of MMA.

Judging by the sometimes wild fluctuations in the UFC’s pay-per-view buyrates, it appears that most MMA fans fall somewhere in the middle. They’ll spring for a handful of UFC pay-per-view cards on their own, perhaps inviting a few friends over to help defray the expense, but will also spend their money elsewhere if a particular event is not especially compelling.

If you count yourself among this group who determines their UFC viewing venue on a card-by-card basis, Combat Press has you covered. Before each of the UFC’s pay-per-view events, we’ll review the main-card fights and surrounding circumstances before determining whether you should buy it or “bar” it. This week, we’ll tackle UFC 178, taking place Aug. 30 from the MGM Grand Garden Arena in Las Vegas.

Because the first edition of Buy It or “Bar” It? centered around UFC 177—one of the most maligned pay-per-view events in recent memory—the recommendation to “bar” it seemed like a foregone conclusion. While this Saturday’s UFC 178 card certainly offers a much more attractive card than its pay-per-view predecessor, the obviousness of this column’s bottom line is once again fairly apparent.

Let’s be honest: If UFC 178 was still being headlined by Jon Jones vs. Daniel Cormier, it would absolutely be in the running for best on-paper main card in UFC history. Unfortunately, an injury to Jones forced this highly anticipated fight from the card. The replacement fight does feature one of the most exciting fighters in MMA in flyweight champion Demetrious Johnson, but Johnson defends his belt against the eighth-ranked Chris Cariaso, whose title opportunity was more the result of a lack of other suitable contenders than his dynamism in the Octagon. To be fair, Cariaso has won his last three fights, but Johnson’s presence in the main event is what will attract fans to the headlining fight, make no mistake.

Really, though, what makes UFC 178 so exciting (and what differentiates it so tremendously from other recent pay-per-view offerings) is the quality of the rest of the main card. Where UFC 177’s co-main event was a fight between two unranked lightweights, four out of the five bouts on the UFC 178 main card will be contested between members of the UFC’s various divisional top tens. This fact alone makes UFC 178 worth watching, but the individual fights themselves only serve to crank up the excitement.

Opening the pay-per-view portion of UFC 178 is an important women’s bantamweight contest between nominal top contender Cat Zingano and eighth-ranked Amanda Nunes. Zingano earned her spot atop the women’s 135-pound rankings with a memorable win over Miesha Tate in April 2013 and was slated to face champion Ronda Rousey for her belt after the two would coach on the 18th season of The Ultimate Fighter. Unfortunately, an injury to Zingano precluded her participation in the show, which instead featured Tate in the role of coach opposite Rousey.

Rousey would defeat Tate in their re-match, and has notched two more victories in the months since. Meanwhile, Zingano has yet to see the inside of the Octagon since her win over Tate, due not only to her injury but to other unfortunate outside-the-cage events. The first main-card fight at UFC 178 should serve as a perfect test for Zingano to prove she still belongs among the women’s bantamweight contenders, and it’s a great opportunity for Nunes to assert herself as a legitimate challenger as well. If Nunes is able to best Zingano on Saturday, she’d likely find herself with a title shot very soon. Lots on the line here.

Next in the lineup is a very intriguing middleweight clash between two guys who have gone undefeated since debuting in the UFC in 2013. On one side of the cage will stand Tim Kennedy. A man probably known among MMA fans as much for his much-heralded time as an Army Ranger as for his success in the cage, Kennedy is currently ranked sixth among his fellow middleweights by the UFC after going 3-0 during his time in the promotion. His last win was a convincing decision over fellow contender Michael Bisping, and Kennedy has the sort of well-rounded game to give any opponent a tough time.

Those skills will certainly be put to the test on Saturday when Kennedy faces Yoel Romero. Romero is ranked 10th by the UFC on the heels of four consecutive wins in the promotion. Despite his stellar wrestling pedigree, Romero has made a name for himself in MMA as the sort of powerful striker who can just as easily knock opponents out with punches as take them down to the mat. In fact, seven of Romero’s eight professional wins (and three of his four in the UFC) have come by way of knockout or TKO. One can’t imagine that Kennedy will have much luck on the ground against Romero, and Kennedy’s only stoppage loss came after the doctor stepped in to end his very first fight. There are a lot of closely matched fights on the UFC 178 card, but this one is probably the hardest to call. The winner will still likely be one more win away from a title shot, but any of the other top middleweights would be very attractive next opponents.

Featherweight contender Conor McGregor has been on a hot streak. The popular Irish fighter has won 11 straight fights, including all three of his UFC appearances. McGregor added to his already considerable following after finishing Diego Brandao with a first-round TKO in front of a raucous Dublin crowd. MMA fans worldwide have their eyes correctly trained on this exciting fighter. Hoping to shift the MMA world’s collective gaze in his direction is fifth-ranked Dustin Poirier. Though just 25 years old, “The Diamond” has already fought in the UFC 10 times. Considered one of the featherweight division’s up-and-coming stars since his debut in 2011, Poirier has notched wins in each of his last three fights, so he’s no doubt the best test McGregor has thus far seen in his MMA career.

Simply put, this fight gives McGregor the opportunity to truly prove to the UFC’s fans that he’s more than just a good promo, and it gives Poirier the opportunity to cement his place among the featherweight elite with a signature win over a well-known (if somewhat untested) fighter. A win for McGregor almost certainly puts him in the title picture, not only because of his success but also his ability to sell a fight (something that has been in somewhat short supply at 145 pounds). If, on the other hand, Poirier can put a halt to McGregor’s momentum, he’d be the highest ranked fighter that featherweight champion Jose Aldo has not already defeated. Barring a win by Chad Mendes in his second fight with Aldo at UFC 179 (in which case, Poirier likely has to wait for the rubber match), Poirier gets the next featherweight title shot with a win as well. The stakes are high.

There is only one fighter on the UFC 178 main card who is not in his division’s UFC top 10, but he’s long been considered one of the best lightweights never to have set foot in the Octagon. That changes on Saturday when Eddie Alvarez makes his UFC debut. The longtime Bellator standout has gone 10-1 since 2008, and avenged his lone loss (and won the Bellator lightweight belt for the second time) by defeating Michael Chandler in his most recent fight back in November. Alvarez gets a rude welcome to the UFC in the form of Donald Cerrone. “The Cowboy” is in the midst of a career resurgence at age 31, winning each of his last four fights inside the distance. Cerrone really convinced fans that he was still a force to be reckoned with when he knocked out the always-tough Jim Miller in his last fight, thus elevating him to his current fifth position in the UFC’s lightweight rankings. Cerrone is always, always looking for the finish (24 pro wins, only five by decision), so his presence alone makes for a pay-per-view-worthy fight. That Cerrone gets to be the first UFC test for a guy like Alvarez makes this a gem.

Truthfully, the flyweight title fight featuring one of the sport’s best pound-for-pound fighters that headlines UFC 178 is probably the least interesting of the five main-card contests. It’s certainly not a bad fight, but the four underneath it are just outstanding. With Jon Jones vs. Daniel Cormier at the head of the card, this would be a perfect 10. Instead, it’s still a solid 8.5. If you are only going to spend your money on one more UFC pay-per-view for the rest of the year, it should be UFC 178.