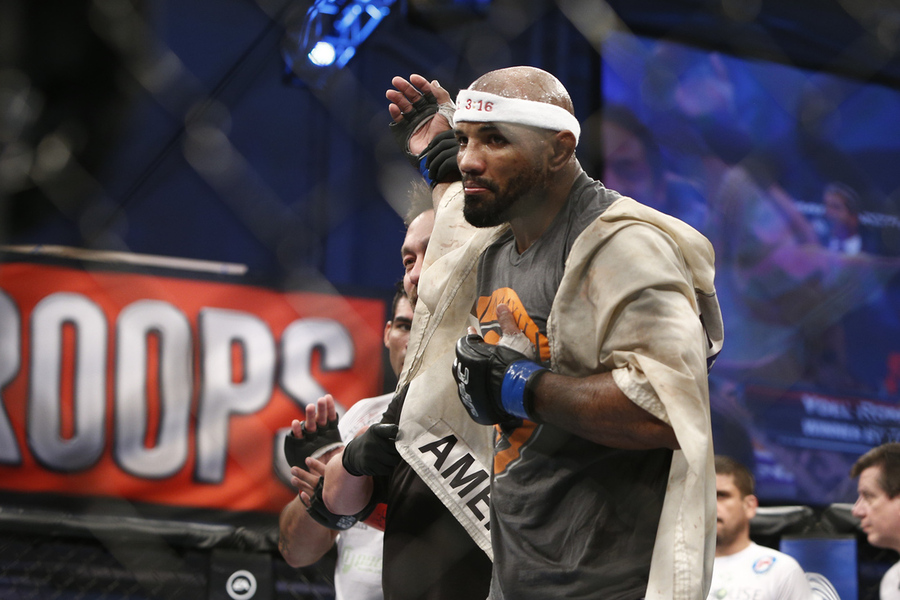 With approximately eight seconds remaining, middleweight Tim Kennedy blasted Yoel Romero with a right uppercut to the jaw and followed it up with a series of thunderous punches which left Romero dazed and confused with his back against the Octagon fence by the time the merciful horn sounded, ending the second round of their fight at UFC 178 in Las Vegas this past Saturday and saving Romero, the Cuban wrestler, from a violent demise at the hands of Kennedy, the decorated U.S. Army veteran and perennial Strikeforce contender.

During the rest period in between rounds, which is mandated by the Unified Rules of Mixed Martial Arts to last 60 seconds, Romero was visibly out of sorts. His cornermen were tending to him by splashing water on him, giving him water to drink, and attempting to advise him on strategy for the final round as a Nevada State Athletic Commission official stood right by the fighter to monitor the corner’s activity. The Ultimate Fighter 12 paramedic-turned-cut-man Brad Tate, who is not affiliated with the fighter’s corner but rather in direct employ from the UFC itself, went to work on a cut on Romero’s left eyebrow, applying an adrenaline swab followed by a far-too-generous helping of vaseline which ended up getting smeared on Romero’s body. The irony in this is that it is eerily similar to the very situation that prompted a policy change from the UFC to not allow a fighter’s cornermen to do cut work in the first place.

As Tate was applying the vaseline to Romero’s cut, the NSAC official began to hurry him and the cornerman out of the cage as the allotted 60 seconds of rest time were just about up. The cornerman appeared to be walking out of the cage at a deliberately slow pace, and Romero was still sitting on his stool. At this point, the 60 seconds had already passed and referee John McCarthy urgently instructed the cornerman to return to Romero and wipe the excess vaseline off of his face and body, sternly yelling “Wipe it off!” after the NSAC official shooed them out, standing in between the cornerman and the stool that Romero still had not stood up from.

It was a chaotic situation that was difficult to fully process as a viewer in real time, let alone for the punch-drunk Romero, whose brain was clearly on autopilot at that point. UFC commentator Joe Rogan also didn’t quite seem to comprehend what was happening at the time, since he was audibly furious about Romero still sitting on his stool even though McCarthy was ordering the vaseline to be wiped off before the fight could resume. McCarthy allowed the third round to begin as Romero was slow to get up from the stool, albeit with stern commands and scolding for the sluggish response. Kennedy’s complaints to the ref during this debacle were swiftly shot down (he couldn’t have known about the vaseline issue from his vantage point either) and by the time McCarthy finally delivered his “Let’s get it on!” catchphrase, one minute and 28 seconds had passed.

The two fighters touched gloves and resumed competition. Twelve seconds into the round, Romero rocked Kennedy with a right hook and swarmed him, following it up with a series of brutal punches that left Kennedy in a crumpled, bloody heap by the time McCarthy intervened and stopped the fight, awarding Romero with a technical knockout victory that was not well received by the audience, as evidenced by the loud booing which prompted an emotional Romero to repeatedly ask “Why?” with the bloodied American Top Team flag draped over his back. In the post-fight interview, Rogan repeatedly tried to ask Romero about the events that transpired before the third round to get his take, but he couldn’t get any kind of sufficient answer out of the Cuban, whose grasp of the English language was clearly limited.

In the post-fight press conference, UFC President Dana White was almost immediately asked about his take on this situation and basically hit the nail on the head. The vaseline blunder, as White said, which was the single largest culprit in the delay, was caused by the UFC-employed cut man, which takes a significant amount of blame away from Romero’s corner. White was also asked about whose responsibility it was to remove the stool from the Octagon and came to the conclusion that it is the corner’s responsibility to get it out of there. However, if you watch the video of this, the NSAC official is furiously shooing the cornermen out while practically standing in between them and the stool Romero is sitting on, making it difficult for them to retrieve it if they want to comply with the official’s commands. At no time is Romero instructed to get up off the stool until after McCarthy deemed that vaseline was wiped off sufficiently, and the Cuban does comply with this order, even if his response time wasn’t the best (which is understandable due to the beating he took).

There have been many accusations flying around about Romero being a dirty fighter in the wake of UFC 178. As far as I’m concerned, however, he was just a dazed fighter who was ready to take instructions and do what was necessary. As for Kennedy’s desire to appeal the outcome of the fight, I’d like to see the commission take a closer look at Kennedy’s punch that rocked Romero at the end of the second round. Kennedy can be seen grabbing a hold of Romero’s right glove before connecting with his big punch, and grabbing your opponent’s gloves is definitely illegal.