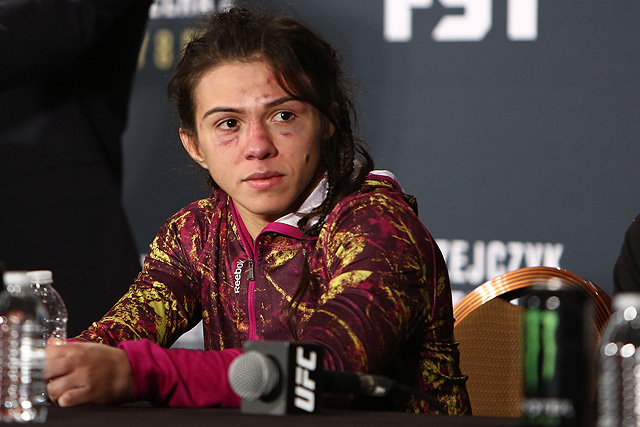 Cláudia Gadelha Didn’t Lose to Joanna Jędrzejczyk, Her Cardio Did

When Cláudia Gadelha faced Joanna Jędrzejczyk in December 2014, both fighters were up-and-coming contenders in a newly created strawweight division that had just crowned a new champion in Carla Esparza.

Gadelha and Jędrzejczyk put on a fantastic fight for the fans at UFC on Fox 13 in Phoenix. They went back and forth for three exciting rounds. Ultimately, the fight ended up going to the judges. Jędrzejczyk narrow defeated the Nova União product by split decision, an outcome many observers disputed. It was a fight that could have gone either way.

Over a year and a half later, Gadelha and Jędrzejczyk faced each other again. It was a highly anticipated rematch that took place on July 8 at the MGM Grand in Las Vegas during the UFC’s International Fight Week. There were a couple of differences this time around. For one, there was a belt on the line. It was also a fight that came after the two rivals were pitted against each other as coaches on The Ultimate Fighter reality show, where they were forced to see a lot of each other without being able to actually fight.

This only added fuel to the fire. Gadelha, a native of Brazil, and Jędrzejczyk, the first-ever Polish-born champion, had a countless number of run-ins at the TUF gym, only making one hate the other more.

Finally, after weeks spent in front of cameras while training their teams, the rivalry culminated in a second fight between Jędrzejczyk and Gadelha.

Gadelha was born in Rio Grande do Norte, Brazil, later living in different parts of the country, because of family and personal issues. Eventually, Gadelha discovered martial arts at Kimura Nova União, a gym in the city of Natal where she trained Brazilian Jiu-Jitsu and became a multiple-time world champion under renowned MMA coach André Pederneiras.

Gadelha debuted at the ripe age of 18. She won her first seven fights in Brazil, finishing six of them via submission. Five of those wins came via armbar. Then, Gadelha ventured abroad and continued to win. Her streak extended through three more fights before she debuted on the big stage under the Invicta FC banner. The wins kept coming — she beat Ayaka Hamasaki by TKO late in the third round. Then she moved another step up, debuting in the UFC with a win over Tina Lähdemäki via unanimous decision.

That brings us to Gadelha’s first fight with Jędrzejczyk in the largest promotion in the world.

The first round of their fight started off well for Gadelha. She was able to use her grappling well enough to get a couple of nice takedowns, but she didn’t create a lot of damage. As the round was coming to a close, however, Jędrzejczyk landed a beautiful right uppercut that stunned and dropped Gadelha.

The second stanza was much more closely contested. The takedowns weren’t there as much for Gadelha. She still executed a few, but just not enough to really garner attention. Jędrzejczyk was able to work hard and get up to her feet. The Polish fighter also managed to land a lot more effective strikes in their exchanges, which seemed to overshadow Gadelha’s clinch work. The round ended with Gadelha in control up against the cage, but again, not maximizing her grappling abilities enough.

The third round went much more in Gadelha’s favor. The Brazilian was able to neutralize Jędrzejczyk’s striking and control her in the clinch, taking her down several times and landing very effective ground-and-pound in close quarters.

Ultimately, the only really close round was the second, which could have gone either way depending on how the judges saw Jędrzejczyk’s strikes compared to Gadelha’s takedowns. The judges ended up seeing it Jędrzejczyk’s way. She came out on top with the victory over a very confused and dismayed Gadelha.

Of course, these two women met again more than 18 months later. This time it was a five-round title fight with bragging rights on the line.

The second fight ended up going almost the same way as the first one did. The same strategies and game plans were employed by both fighters, but they were done much more transparently. Gadelha focused on grappling and getting Jędrzejczyk to the ground. Meanwhile, the champion stayed at distance, utilizing her jabs and kicks while defending takedowns.

Gadelha took the first two rounds, using a grapple-heavy game. The middle round was the closest round — just like the middle round in the first fight — and the last two rounds went to Jędrzejczyk. She exploited the Brazilian’s lack of cardio, landed great strikes and won in dominating fashion.

Jędrzejczyk ended up taking a fairly lopsided decision on all three judges’ scorecards. It wasn’t seen as a controversial verdict, either. On a positive note, it was a very entertaining bout that won “Fight of the Night” honors.

Unfortunately, it was the lack of cardio that led to Gadelha’s loss.

While Jędrzejczyk obviously won the fight, she didn’t overwhelmingly dominate the challenger. Instead, she took advantage of a fighter who frankly couldn’t conserve her energy the way she should have.

Ideally, if Gadelha was smart, she wouldn’t have spent two rounds constantly going for takedowns, because (even as she admitted at the post-fight press conference) her arms were completely shot and the lactic acid building up in her muscles was preventing her from continuing to utilize her grappling techniques. This is not to say that Jędrzejczyk was handed the fight, because she absolutely did a great job to pull out the win, but it was a fight Gadelha lost more than a fight Jędrzejczyk won.

Cardio has always been an issue with the Nova União camp. In addition to Gadelha, the camp houses José Aldo, Renan Barão, Thales Leites, Junior dos Santos and many more. These are supremely talented fighters, but they don’t really focus on being economical with their energy as they go into later rounds. The great former longtime champion Aldo is a prime example.

Right in the thick of his impressive title run, Aldo had fights with guys like Mark Hominick, Frankie Edgar and Ricardo Lamas. He was the Aldo everyone expected in these fights — good foot work, great speed, crisp striking and deadly leg kicks. As the fourth and fifth rounds came about, however, he would begin to coast and take it easy. In fact, he would even get taken down and endure some ground-and-pound. It was surprising and disappointing to see after his great starts.

The issue Aldo has experienced is the same one that Gadelha went through against Jędrzejczyk. It’s a recurring theme with Nova União. The camp’s fighters go too hard too early.

Instead of realizing that they’re in a three- or five-round fight, where they should be using the first round or two to feel out their opponent, these fighters are kicking like they’re chopping down a tree and going for hard double-leg takedowns like a bull charging at a matador. It’s not a smart strategy when the goal is to become a champion.

Of course, what do I know? I haven’t fought professionally, let alone on any organized level, but I do know the human body can’t go 90 or 100 percent with kicks and punches for a 25-minute fight. Our bodies are just not made for it. If that was the case, everybody would do it and be successful.

It’s not like Aldo is experiencing an adrenaline dump, either. He’s fought on the big stage for years, so he knows where he is and what’s at stake. That excuse just won’t fly. What these Brazilian fighters, along with their trainers, need to do is implement a strength-and-conditioning program, similar to what football players do in the United States. There are specific trainers that monitor these situations, and while they may not be fighting experts, they know how to distribute the body’s energy consistently, while leaving more than enough for when it’s needed.

Going all-out is great when you want a quick knockout, but that knockout is not going to happen every time, especially against top-flight competition in the world’s best promotion.

With two losses to the champion, Gadelha might have had her last chance at Jędrzejczyk. She either has to make a great case to get a third fight with the champion, or hope the belt changes hands. Either way, that’s assuming she comes up with a better plan against a fighter that clearly has her number.

Gadelha did great in her fight… in the first two rounds. If she had a better plan for the five-round war she endured, then maybe she would have came out on top. This was a loss she shouldn’t have allowed. After most likely being ahead on the judges’ scorecards to start the fight, it was Gadelha’s fight to lose, and that’s exactly what she did. It wasn’t from a knockout or a submission, but from lack of energy.