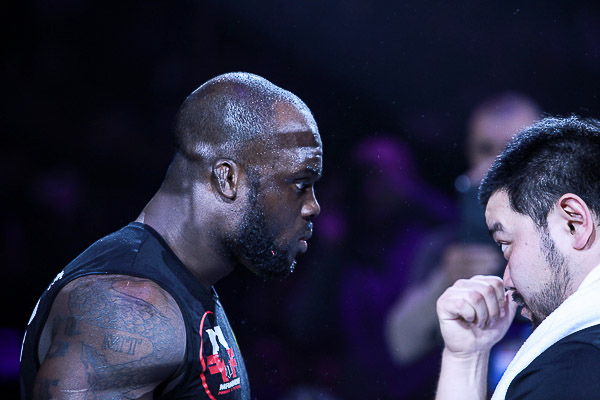 On Friday, Sept. 19, Bellator MMA hosted its 125th event from the Save Mart Center in Fresno, Calif.

In the night’s main event, former title challenger Doug Marshall welcomed hard-hitting kickboxing specialist Melvin Manhoef to the promotion. The 37-year-old Marshall saw his four-fight winning streak come to a crashing halt in November when middleweight champion Alexander Shlemenko stopped him with strikes. Manhoef, meanwhile, had bounced back and forth between kickboxing and MMA throughout his career. In his most recent MMA bout, he stopped fellow Strikeforce veteran Evangelista Santos in just 46 seconds.

The main card also featured four-time middleweight tournament veteran Brian Rogers against Brazilian Rafael Carvalho. Rogers got back in the win column in May with a flying knee knockout of Adrian Miles. Carvalho made his promotional debut at the event.

Newcomer Rafael Carvalho impressed in his promotional debut, stopping veteran Brian Rogers in the first round with strikes. Rogers closed the distance early and looked for his overhand right. Carvalho looked for a clinch, but Rogers fended it off with heavy punches. Rogers scored with a takedown and then looked for a guillotine choke as Carvalho worked back to his feet. Carvalho connected with a knee as Rogers came forward and followed with a stiff left hand. Rogers backed against the fence and Carvalho delivered a pair of right hands that crumpled Rogers. As Rogers tried to recover, Carvalho poured it on, forcing the referee to halt the contest.

Heavyweight Javy Ayala ran through former boxer Raphael Butler, scoring a first-round rear-naked choke. Ayala rushed forward and landed a one-two combination that backed Butler against the cage. He changed levels and looked for a takedown. Butler tried to defend, but gave up his back in the process. Ayala quickly locked on the choke and coerced the tap from Butler.