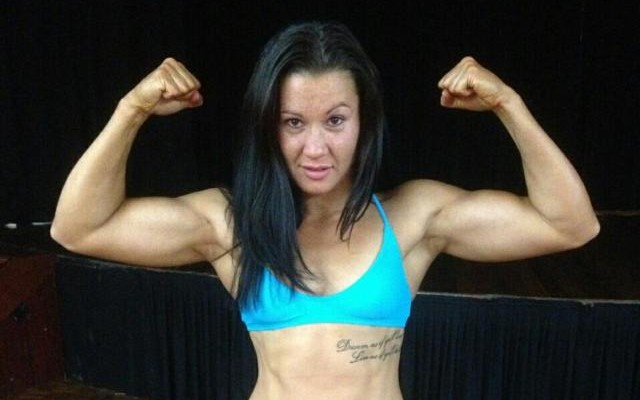 When you have two kids, it quickly becomes known that one (of anything) is never enough. If one has something, the world cannot possibly continue unless the other has it too.

Arlene Blencowe is blessed with two children. She dedicates everything in her life to them. They are what drives her to succeed. They are why she works, trains and fights hard. The world boxing titles that she won last year were for them as much as they were for her.

On Aug. 30 in Canberra, Australia, Blencowe has the opportunity to walk out of the Tuggeranong Basketball Stadium with two more belts draped over her shoulders. Just this week, is was revealed that as well as the Storm Damage featherweight title, the vacant International WKBF Oceania Professional Women’s MMA featherweight title would be up for grabs in Blencowe’s fight with Faith Van Duin.

Having one really is never enough.

“It’s funny because for me, with my world boxing titles that I won last year, that was in the one fight. So the joke is now that it’s obviously my style—you can’t fight for one, you’ve gotta fight for two,” Blencowe explained to Combat Press. “Each of my children have claimed one belt each. One’s got more jewels on it, so that’s my daughter’s. So now, with these two belts, they’ve both put dibs on it straight away with which one they want so there’s no arguing when I take them home [laughs].”

Beating a top ranked featherweight like Van Duin, who has just recently been signed to Invicta FC, would be a major accomplishment for Blencowe, who has continued to pursue fights in both boxing and MMA. Long term, though, Blencowe has her eyes set on fighting on one of the biggest stages for women’s mixed martial arts.

“Invicta is a goal of mine, and it always has been,” Blencowe confessed. “I guess [winning] will turn some heads and a lot of doors will open up for me here, if I win.”

Blencowe comes into the dual title fight on the back of two straight victories, with her last loss coming at the hands of Van Duin. Blencowe doesn’t like to look at the momentum that she has been building leading into the fight. She looks to showcase just how much her game has been enhanced over the course of 12 months through her change in gyms.

“This has probably been the best fight camp I’ve ever had, especially for a MMA fight,” Blencowe admitted. “I’ve been traveling a fair bit, and I’ve been going to Sydney for my boxing and started training at Beestingz in St. Mary’s. It’s been awesome there. They just an awesome group of guys as well. I haven’t long started there and I’ve already got guys coming down for the fight and people that are willing to help so much. It’s like that with most MMA gyms—you walk in there and everyone is just super friendly. It’s good to just sit there before my training sessions and see good fighters training, and obviously that will sharpen up my own skills. It’s very different to what I’m used to, which is just having one training partner, which was Sam [Bastin] up at Allegiance [MMA].

“I’m not thinking about [the last two fights] too much. Leading up to them, there wasn’t that much notice in taking the fights. I’m going into this one heaps more confident knowing that my skills have sharpened up heaps more. I’m really looking forward to it. Since it was so close, it’s really anybody’s fight this time. It’ll be interesting to see. It’s been 12 months and she hasn’t stepped back in the cage. I think she’s had a kickboxing fight a little while ago, but it’ll be an interesting fight, that’s for sure.”

The last time the pair met, Blencowe had already fought five tough rounds. This time, both fighters will be fresh. They will have only each other to worry about.

“When I fought Faith, I’d already had two fights in that night,” Blencowe said. “I just remember, at the end of that fight, being empty, like having nothing left. I’m pretty stoked, I guess, that it did go the rounds, because I’d been caught before with Jessy Jess and Kate Da Silva with rear-naked chokes and that. So I guess to go the distance with someone of that kind of quality, I was pretty happy. I’m not sure what kind of tactics she’s gonna have planned this time, whether she’s going to go to ground or whether it’s just gonna be stand-up. I do remember last time it was quite a stand-up fight. I’m happy for it to sorta go wherever it wants to go really. I’ve been working on my ground game quite a bit since last time.”

Fighting multiple times in the one night is becoming a rarity in modern-day mixed martial arts, and it’s an experience that will stay with Blencowe throughout her career.

“It’s a pretty cool thing to be able to say,” Blencowe said. “I remember back before I had my first kickboxing fight—so, years ago—I was sitting around and watching a TV show and there were these girls in England doing the same sorta thing, doing the gauntlet, and I remember watching them and thinking, ‘Wow, these girls are weapons.’ Even now, when I tell the story that I fought three MMA fights in one night, people are like, ‘What? That’s insane!’ It was cool. I wouldn’t say I wouldn’t do it again, more so I’m glad I’m fighting Faith fresh.”

Arlene would like to thank her sponsors: Outlast Nutrition, Tuncurry Beach Bowling Club, Enriched Health & Physiotherapy and Photography by Linda. She would also like to thank her trainers from Jabout/Toe The Line, Beestingz and YMCA Taree. Arlene would also like to give a shout out to her favorite two little people and her biggest fans, Kaylah and Keane. Follow Blencowe on Twitter: @arleneangerfist
Advertisement