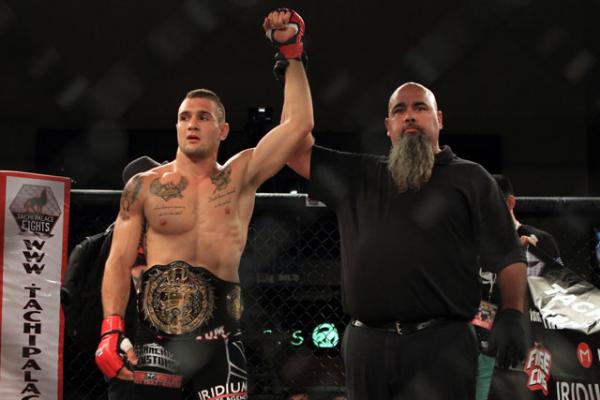 On Friday, Aug. 22, Resurrection Fighting Alliance held its 17th event. The promotion hosted the first sanctioned MMA event in South Dakota when it visited the Sanford Pentagon in Sioux Falls.

The night’s top billing was a lightweight title affair between longtime RFA veteran Dakota Cochrane and California’s Christos Giagos. Cochrane rode a two-fight winning streak, having bested Ultimate Fighter winner Efrain Escudero at RFA 13 in March before knocking out UFC veteran Anton Kuivanen in just 48 seconds in June. Giagos, meanwhile, rode a three-fight streak of his own, with all three victories coming before the final bell. The Tachi Palace veteran had scored a stoppage in seven of his nine career wins, including five via knockout.

In the night’s co-main event, the promotion’s 145-pound title was on the line when UFC veteran Justin Lawrence took on Mark Dickman. Lawrence had competed just once since his UFC release, topping Luis Saldana at RFA 10 via decision. Dickman rode a four-fight winning streak, including a second-round submission win over Raoni Barcelos at RFA 14 in April.

Also on the main card, Luke Sanders made his bantamweight debut against Darrick Minner, middleweight Francisco “Kiko” France took on Isaac Appel, welterweights Donavon Winters and Jordon Larson squared off, and, in the first main-card bout, Cory Galloway faced off with Brazil’s Bruno Frazatto at bantamweight.

Above are video highlights of the main card, including the main event between Cochrane and Giagos (courtesy of AXS TV).