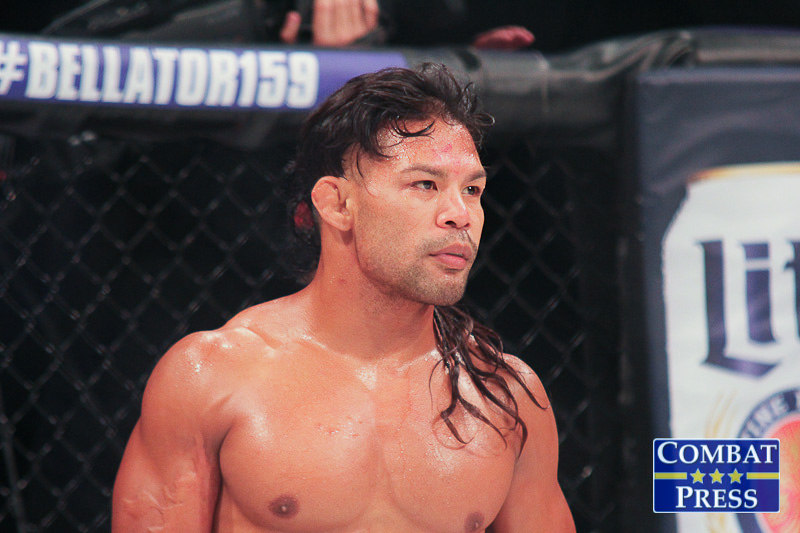 Bellator MMA Should Continue to Focus on the Lighter Weight Classes

At Bellator 159, Joe Taimanglo did something not many people — this writer included — thought he could do. Darrion Caldwell had been on the upswing in his previous six fights in Bellator, coming off a win over Joe Warren, one of the better fighters in the promotion, just four months beforehand.

As the underdog, Taimanglo took advantage and in the third round was able to give Caldwell his first career loss and stop his ascension to a title shot, all while putting himself in that same position in the bantamweight division.

However, this isn’t an indictment on Bellator’s divisions being considerably weaker than their UFC counterparts or Bellator’s top fighters being overly hyped and unable to compete with other top fighters in their division elsewhere. Caldwell is a good fighter and will eventually fight for a title, whether it is in Bellator or another organization. His wrestling is simply that good, and if he can work on the jiu-jitsu side of his game and continue to evolve in the striking department, then he will eventually be one of the better bantamweights in the world. What Caldwell’s loss to Taimanglo proves isn’t lack of quality, but lack of depth for Bellator outside of the lighter divisions. Bellator has excelled in producing strong-caliber fighters in the lighter divisions from lightweight down to bantamweight. These lighter weights should be more of a focus for the promotion than the higher weight classes.

These divisions have been incredibly deep for some time and have produced some of the better fighters in Bellator history. Just look at the lightweight division that has housed names like current UFC lightweight champion Eddie Alvarez and former Bellator lightweight champ Will Brooks. Even in Taimanglo and Caldwell’s division, there’s not only champion Eduardo Dantas, but guys like Marcos Galvão, Joe Warren and Sirwan Kakai. Go up another level to 145 pounds and you’ll find Daniel Straus, Daniel Weichel, Pat Curran and the list can go on and on. Unlike other divisions, like say the heavyweight division, there is not only talent outside of the UFC, but enough talent to create a competitive climb to the top.

Heavyweight has always been a wasteland in Bellator. That goes back to the days of former Bellator heavyweight champion Cole Konrad, who absolutely steamrolled the division with his grinding style. None of his fights were conceivably close, and it led to a lack of opponents for Konrad and only one title defense in almost 700 days of holding the belt.

Even the current crop of Bellator heavyweights don’t fight as often. Since Konrad vacated his belt in 2012, there have only been three heavyweight title fights. The last came at Bellator 115 in April 2014. Now, the lack of fights is mostly due contract disputes between former champion Vitaly Minakov and Bellator, but who could have stepped up to face to face Minakov if he did settle the disputes? Minakov had already beaten the best name in the division, Cheick Kongo. Outside of Muhammad Lawal, who else would there have been who could stand up to the undefeated Minakov? And now Minakov is no longer the champion and the belt remains vacant.

This hasn’t been a problem in the lighter divisions, where fighters pop up more often for title shots. There are guys like Taimanglo coming out of nowhere to beat the supposed best in the division. At the featherweight level, there is the three-headed monster of Straus, Curran and Patricio Freire that continuously is up there fighting one another for the title.

Meanwhile, Bellator’s best division in the deep end of the weight-class pool comes at light heavyweight. Some of that talent comes from elsewhere, whether it be Strikeforce or the UFC. Sure, there are Liam McGeary and Emmanuel Newton, but the other divisions are built off homegrown talent to a much larger degree and succeed due to that talent being supplemented by high-end talent.

There are a lot of prospects in the lighter divisions, far too many to just list, which keeps these divisions afloat. The same can’t be said for the heavier weight classes above. These lighter-weight divisions should be the focus of the promotion, since that is where the talent resides. Imported fighters such as Benson Henderson and Josh Thomson only help build those divisions up from an already firm base. It’s time for Bellator to make this into the WEC 2.0, with a focus on the smaller guys who will eventually become household names. This way, we’ll see more fighters like Taimanglo and Caldwell spring to life and show just how competitive these divisions can be.