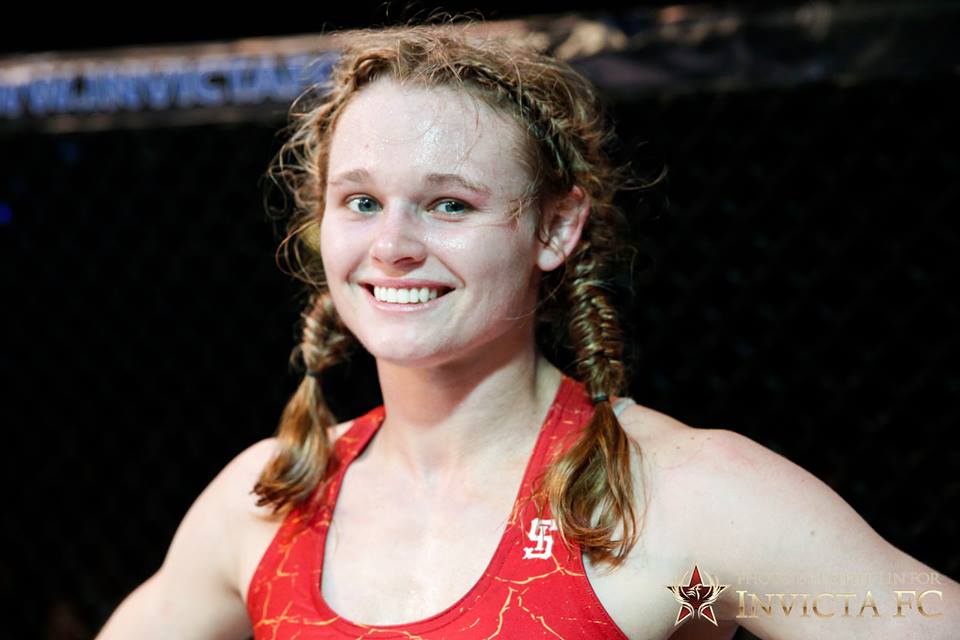 Invicta FC 14’s Andrea Lee: Out to Be the Greatest

Without context — or at least an explanation of the acronym — you might think flyweight Andrea Lee has been punched in the head one too many times. But that’s not the case.

The 26-year-old Texas native is a determined fighter who wants nothing more than to achieve greatness in combat sports. Lee’s start in martial arts came while she was working as a waitress in a sports bar. It’s a far cry from where she is today.

“I didn’t expect to go this far,” explained Lee. “At first, I just wanted to do it as a hobby and learn to defend myself.

“But I learned to fight. And that was something I wanted to do as a kid. I started competing and fell in love with it. [Now] I want to be remembered as the greatest of all time.

“I’m a pretty competitive person, so it made me want to keep going.”

Keep going, she has. Lee was a natural in both the ring and the cage. With only a few years of training, she captured two Louisiana Golden Gloves titles. In 2013, she claimed the National Golden Gloves championship. However, her success in the boxing ring wasn’t enough to keep her away from MMA.

“We were thinking of going to the Olympics, which is why I was mainly focused on boxing at first, but we decided that MMA was our best route,” declared the fighter. “Women’s MMA was taking off and boxing was kind of dying.

“Plus, I was more attached to MMA from the beginning anyway.”

Despite a preference for the cage, Lee continued to develop her skills while competing in boxing, Muay Thai and kickboxing. Along the way, she married her coach, Donny Aaron. The pair’s relationship created an interesting dynamic to her training.

“Donny… he pushed me. It’s probably the toughest part of training. It’s more personal. When he’s getting on me about something or going harder on me than anybody else, sometimes he gets under my skin. I get angry ’cause he’s yelling at me to do something; I get frustrated,” revealed Lee candidly.

The relentless coaching from Aaron, a former kickboxer, has turned Lee from a novice into a decorated combatant in every aspect of combat sports. And although the pair’s coach-student relationship is a huge part of their day-to-day life, they do their best to focus on something more important: their daughter, Ainslee.

“It’s amazing, but it’s not easy,” said Lee of raising her daughter. “I have a really great family, both mine and Donny’s. She’ll hang out at the gym while we train in the morning. Then they’ll pick her up after work and take care of her.

“They make it easy for us to train. It’s difficult because I’m always training and I want to have some mother-daughter time. I don’t always get that. I make a lot of sacrifices, but I make up for it too. Whenever I’m on my off days and we’re home, I’ll play with her, even when I’m tired.”

With both parents thriving in combat sports, it wouldn’t be surprising if Ainslee followed in their footsteps. But according to Lee, it may not be that straightforward.

“I would embrace it. I’d love it, if that’s something she wants to do. It’s definitely something that Donny wants her to do. He would like to push her into it, but I think the more that he pushes, she’s like, ‘I don’t want to do it.’

“If she sees other kids getting into it, she’ll be more apt to do it. Anything he wants her to do, she’s going to rebel,” Lee joked.

While her daughter’s future may still be up in the air, Lee’s is more clear. After a lightning-fast TKO win in her professional debut that saw her kick off her opponent’s finger, Lee was signed by Invicta Fighting Championships. “KGB” impressed in her promotional debut, edging out Shannon Sinn. Just a month later, Lee was called upon for a big step up in competition against Roxanne Modafferi at Invicta FC 10.

“I’m still happy about that fight. I don’t regret it at all,” said Lee of her first professional defeat. “It was a huge leap for me in my career. Being able to compete against Roxanne, it was an honor. The only way to get better is to compete at a high level. She’s on that level.”

Lee fell short on the scorecards in Houston against Modafferi, but the Louisiana-based fighter proved she’s much more than a striker by pushing the veteran for a full three rounds.

“It was a tough fight. I was able to give her a run for her money,” recalled Lee. “I ended up losing a split decision, so somebody thought I won the fight. There were a lot of things in my jiu-jitsu that I had been training and working on that I was able to apply in that fight. I found myself in good positions considering the level she’s on, so I was very happy about that.”

With so many accolades in the striking arts, Lee’s performance against Modafferi showcased glimpses of a different side of her fight game: her self-proclaimed “underrated” ground game. But, unfortunately for Lee, there was something amiss in the cage that night that kept her from proving just how skilled she really is.

“You know, I’m not making excuses, but I don’t feel like I was completely there that night,” she declared. “The performance against Roxanne, I didn’t really get to display anything against her.

“I’m not the type of person that will back out of a fight, especially the day of the fight or two days before. I ruptured my eardrum leading up to that fight. I knew going into the fight, it was going to be tough for me. She was already a tough opponent and being sick was going to make it even tougher. I wasn’t in the right state of mind. I wasn’t able to defend things that I should have been defending. I am better than that.”

Lee will have an opportunity to prove it on Sept. 12 in Kansas City, Mo., when she takes on Hawaii’s Rachael Ostovich at Invicta FC 14. The two fighters have fought on the same card in the past, but Lee has no problem setting aside their existing relationship to get back in the win column.

“Her and her family are so nice. It’s going to suck having to punch each other in the face,” Lee said with a laugh. “But at the end of the day, we’re going to be friends. Whatever happens, happens.”

A win against Ostovich would help Lee rebuild the momentum she needs to be considered for 125-pound title contention, as well as for her long-term goal of being the best in the sport.

“I still think I’m on the right track. Just a couple more fights,” said Lee. “Obviously, I have one with Rachael Ostovich. Then probably two or three more after that. If I continue to excel, impress and win, I think I’ll have the opportunity to be next in line.”

Being the greatest of all time may still be years away, but it’s clear that Lee has a plan to get there. Now her job is to go out and execute in the Invicta cage.

Andrea would like to thank: her sponsors: Carbonation Toy, Classic Sound, Martial Arts Life and Amber Sports. Also her head coach, Donny Aaron, all of her coaches and training partners from Karate Mafia and Elite Combat Academy, and the girls that came in for this camp: Sharon Jacobson, Amanda Bobby Cooper and Jinh Yu Frey. Follow her on Twitter: @AndreaKGBLee