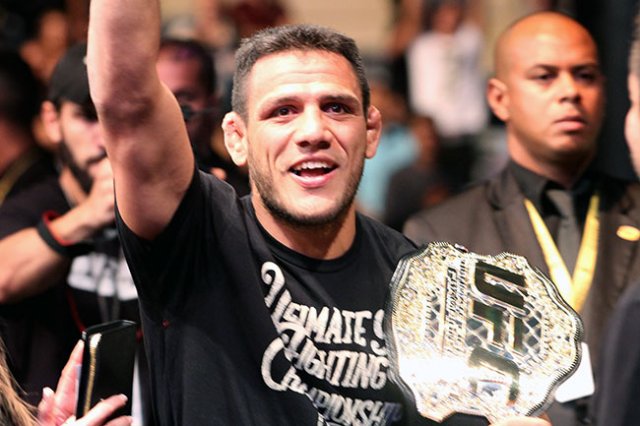 Does Rafael Dos Anjos Still Have What It Takes to Be a Title Contender?

Rafael dos Anjos faces Rafael Fiziev in the main event of this weekend’s UFC Fight Night card. This is the third time that this fight has been scheduled. It was originally set to be the main event for the UFC Fight Night card on Feb. 19. The bout fell through due to visa issues for Fiziev and was subsequently rescheduled as a five-round co-main event for UFC 272 in March. The match-up was cancelled once again after Fiziev tested positive for COVID-19 a week before the event.

Dos Anjos has won his last two contests, but he is the underdog against the rising prospect Fiziev. Does he still have what it takes to be a title contender in the lightweight division?

Dos Anjos is coming off back-to-back, five-round victories but there is the caveat that both of these came against opponents who took the fight on short notice. In Nov. 2020, dos Anjos was originally supposed to face Islam Makhachev, but the Russian pulled out due to injuries and was replaced by Paul Felder. Felder put up more resistance than most expected, but dos Anjos still persevered with a decision victory. After Fiziev pulled out shortly before UFC 272, Renato Moicano agreed to be his replacement in a five-round catchweight bout at 160 pounds. dos Anjos dominated Moicano, albeit after having to withstand a strong fifth round from his fellow countryman. The 37-year-old secured a unanimous-decision victory.

With both of these victories coming against short-notice opponents, and dos Anjos being inactive in the past couple of years, it is difficult to determine whether he still has the capability to be in the lightweight title picture.

Dos Anjos’s path to victory against Fiziev seems to be obvious, and that is utilizing a wrestling-heavy strategy. After just six fights inside the Octagon, Fiziev has already established himself as one of the most potent strikers in the lightweight division. He has outstanding speed, accuracy and power, and has shown that he can harness this with his excellent fight I.Q. Getting Fiziev to the ground is not going to be easy for dos Anjos as the 29-year-old has demonstrated outstanding takedown defense thus far in his UFC career, having a 90-percent takedown defense rate.

Dos Anjos will need to time his takedowns perfectly to ground Fiziev. If he fails with his initial attempts, the 37-year-old will likely have to persist until he is possibly able to tire Fiziev out. If dos Anjos is able to take Fiziev down and control him, he will look to use his superior jiu-jitsu credentials to submit the 29-year-old. Dos Anjos is a fourth-degree black belt in Brazilian jiu-jitsu and has 13 submission wins.

Fiziev has been almost perfect in his UFC run, but his contest against Bobby Green did reveal a couple of potential weaknesses. Green has a unique, boxing-centric striking approach, keeping his hands low and using shoulder rolls and elusive head movement to evade strikes. This proved to be effective as Fiziev was struggling to land strikes to the head. The 29-year-old then adjusted and started attacking Green’s body and legs. Fiziev appeared to win the first half of the bout, but then his pace started to slow down. His volume decreased in the third round, and he was not able to evade many of the strikes coming back at him. Fiziev ultimately secured a unanimous decision win, but the fact that he faded late suggests that his conditioning was perhaps not where it needed to be to maintain his marauding, high-volume style.

Fiziev has been able to back up many of his opponents against the cage due to his substantial punching power and ability to sustain attacks. It was notable that Green was able to avoid this, instead taking to the middle of the Octagon, and he was able to stay there for the majority of the bout. Dos Anjos is a different type of athlete to Green, but he could learn from Green’s performance and apply some similar principles in his approach.

The fact that Fiziev slowed down against Green demonstrates that dos Anjos would be wise to push the pace. He will likely do this by attempting takedowns early, which will put Fiziev onto the back foot. Constantly forcing him to defend the wrestling will be a real test of his conditioning. If dos Anjos is unsuccessful with this approach, then he could look to push Fiziev against the fence and tire him out in the clinch. This is something that dos Anjos did to great effect when Paul Felder was able to thwart his takedowns.

Dos Anjos is not a prolific finisher, but he has often weaponized his excellent cardio to overwhelm opponents that possess superior power and explosiveness. The former lightweight champion has fought the five-round distance on eight occasions in his career and has 16 decision wins to his name. In comparison, Fiziev has never been past the third round in his career. It is likely to be important for the Brazilian to hold his own on the feet in the early rounds, in order to prolong the fight and test Fiziev’s conditioning. Dos Anjos is a solid striker who has good fundamentals, but he will not want to spend prolonged periods of the contest in the striking range against a man as dangerous as Fiziev. The Kazakhstani fighter is expected to have a significant speed and power advantage and is a more dynamic striker with a wider array of strikes in his arsenal. Dos Anjos is durable, having only been finished three times in 44 fights. He will need to rely on this toughness to help him navigate the almost inevitable early barrage from Fiziev.

At 37 years olf, dos Anjos is at an age when fighters in the lighter weight classes tend to decline rapidly. This factor, in addition to the impressive performances that Rafael Fiziev has put together, has led many to predict that Saturday’s fight will be a changing of the guard in the lightweight division. If dos Anjos can overcome Fiziev he will prove these people wrong and will ensure that his name is still relevant in the UFC lightweight title picture.