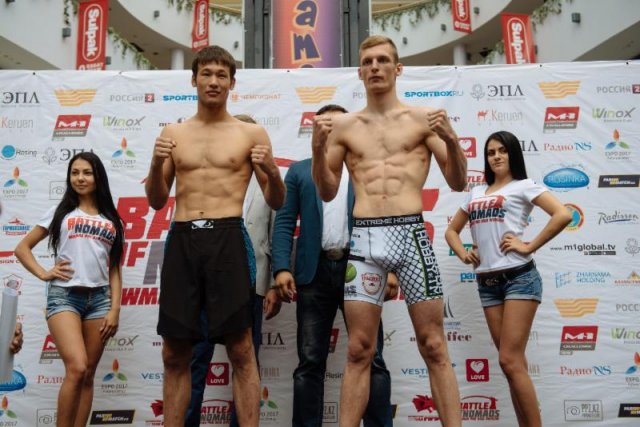 Will Shavkat Rakhmonov Continue to Impress?

Shavkat Rakhmonov faces Neil Magny in the co-main event of this Saturday’s UFC Fight Night card. Rakhmonov has been victorious in all three of his UFC outings and is undefeated across his 15 professional fights. His strong performances inside the Octagon have led many to predict that he will be competing for the UFC welterweight title in the near future. Will he continue to impress this Saturday?

Rakhmonov had already amassed an impressive body of work before he entered the UFC. His most notable achievement was capturing the welterweight championship in the Russian promotion M-1 Global. All 12 of his victories had come by stoppage, and there were high expectations before his UFC debut. He has proceeded to dominate in all three of his UFC bouts and has continued his finishing streak by securing two submissions and one TKO victory.

Following these victories over unranked opponents, he now faces a significant step-up in competition against Neil Magny. Magny is tied for the most wins in UFC welterweight history, along with Georges Saint-Pierre, and is currently ranked tenth in the division.

In his short UFC tenure, Rakhmonov has displayed a level of composure and poise that belies his lack of experience at the highest level. He has demonstrated that he is a slick, technical striker who is equally as skilled on the ground. Perhaps most impressively, the 27-year-old has outclassed opponents in their strongest areas. In his second UFC contest, he took on veteran Michel Prazeres, who is known for his accomplished grappling skills. Rakhmonov proceeded to thwart all three of Prazeres’ takedown attempts and at one point he secured a takedown of his own. The Kazakh fighter wore Prazeres down on the ground and submitted him with a rear-naked choke in the second frame.

In his most recent showing, Rakhmonov faced a fellow rising prospect in Carlston Harris. Harris is a tall, hard-hitting fighter who throws unorthodox strikes. Rakhmonov kept Harris at range and was patient. His use of feints seemed to overwhelm Harris, who resorted to loading up and throwing big punches which resulted in him getting countered. Harris’s frustration on the feet led to him engaging in a clinch. After a back-and-forth wrestling exchange, the 27-year-old took Harris down with a trip.

Harris managed to get back up fairly quickly. Soon after this, Rakhmonov hit Harris with a spinning hook kick which dropped the Guyana native. Rakhmonov then landed some powerful ground-and-pound strikes which caused the referee to stop the fight.

With the confidence that Rakhmonov has in his ability to be a complete martial artist, it will be intriguing to see if he elects to try and beat Magny in his best department, which is his wrestling. Magny is not a prolific finisher, with just 10 of his 26 victories coming by stoppage. Magny’s methodical approach has been used as a criticism against him, but it has evidently brought him a great deal of success. He is an excellent wrestler who is adept at controlling his opponents with his grinding, relentless style.

Rakhmonov can also take opponents down, but, unlike Magny, he aggressively looks for the finish on the ground. Magny has struggled against fighters with elite grappling in the past, such as Michael Chiesa and Rafael Dos Anjos. Rakhmonov will likely be the physically stronger man, and, if he is able to take Magny down, he will almost certainly attempt to secure a quick submission. Magny was able to survive against the aforementioned Chiesa despite being controlled for prolonged periods. However, Rakhmonov will be confident that he can end the fight in this area due to his greater submission threat.

Magny is a fundamentally sound striker who fully utilizes his height and long reach by keeping his opponents at the end of his jab. He varies his attacks. He likes to throw shots to the body to slow down his opponents. In his last fight against Max Griffin, he used teep kicks to great effect. Earlier on in his career, Magny was a more one-dimensional athlete who was reliant on using his wrestling to win fights. In recent years, he has made great advancements in his stand-up game and is now able to have success in bouts that almost exclusively take place on the feet, such as his fight against Geoff Neal.

The 35-year-old Magny has outstanding cardio, and he weaponizes this against his opponents. It has to be remembered that Rakhmonov has only been to a third round once in his career. If he cannot finish Magny in the first two rounds, the veteran’s experience of going the distance may help him secure the victory. Magny holds the record for the longest career fight time in UFC welterweight history, and 16 of his 26 wins have been decisions.

Rakhmonov likes to be patient, but he cannot afford to let Magny settle into his rhythm, as he can deliver sustained offense without tiring. Rakhmonov has the power advantage, and he will know that he has the explosiveness to deliver the knockout blow. Magny is durable, as he has only been knocked out twice in his 34-fight career, and he has come back to win fights after being knocked down.

Rakhmonov is accustomed to having the height and reach advantage over his opponents, but that will not the be the case against Magny. He can mitigate the slight height and reach deficit with his speed. Magny’s slender frame has made him vulnerable to powerful leg kicks throughout his career. Rakhmonov could target this area, knowing that it can also serve to slow down Magny’s pace.

Rakhmonov’s fast rise has resulted in fans drawing comparisons to third-ranked welterweight contender Khamzat Chimaev. Chimaev had a meteoric ascent towards the top of the welterweight division, reaching his current position in the weight class after just five contests in the Octagon. Chimaev’s first-round destruction of ranked fighter Li Jingliang silenced many doubters who questioned his potential following his wins over unranked opponents. Rakhmonov finds himself in a similar timeframe ahead of this weekend. His talent and mental fortitude seem to suggest that he is ready to compete with the elite. However, this cannot be said until he gets past the biggest test of his career in Neil Magny.