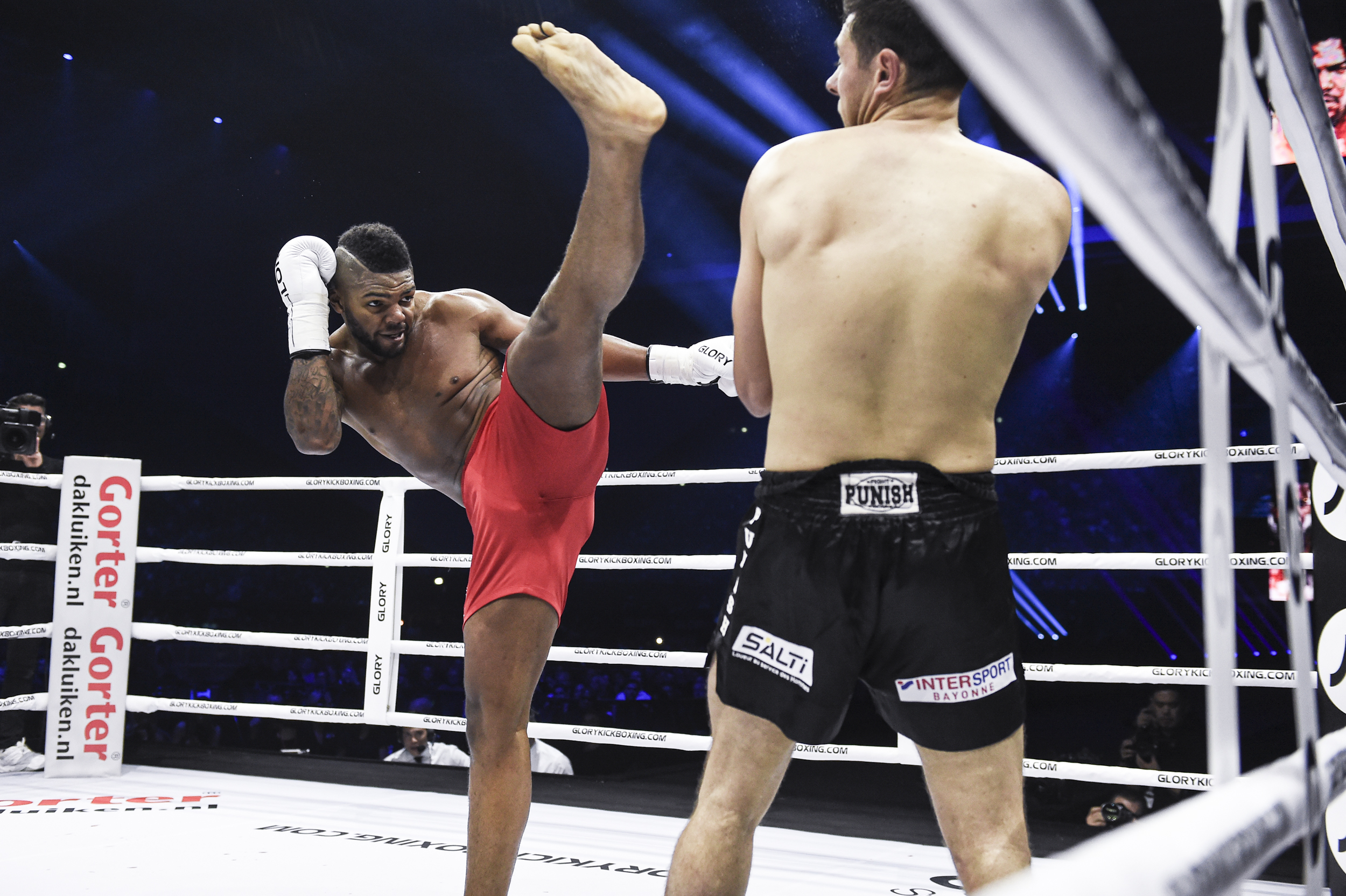 On Jun. 17, GLORY Kickboxing announced the dismissal of all Russian athletes. Most notably, light heavyweight champion Artem Vakhitov was released. The now-vacant title will be battled for by top condenders Luis Tavares and Sergej Maslobojev at GLORY 81 on Aug. 20 at the Castello Düsseldorf in Germany.

Tavares, who was supposed to fight Vakhitov for the belt last March, withdrew from the fight, but subsequently scored a victory over Frenchman Florent Kaouachi by a devastating left-hook knockout on Jun. 11 at GLORY Rivals 1. Below is a recent interview between Tavares and Combat Press author Ruslan Navshyrvanov.

RN: You won your latest fight, leaving no chance to the opponent. Did you expect that easy of a fight?

LT: “I made it look easy. That’s the difference. There are no easy fights. Florent is a strong and dedicated fighter. If you look at this fight, there are moments were he is very surprising and dangerous. Besides, he had nothing to lose, and I had everything to lose. All the pressure was on me, and I pulled it through. You have to understand that it’s very difficult to knockout a fighter who is so defensive as he is. But I got the job done. I was prepared as if I was fighting for the world title. Actually, all my statistics in the preparation have been off the charts. It is said, hard training makes easy fights. So I got exactly what I anticipated.”

RN: However, kickboxing fans society understand that Florent is not at your level. You were going to fight Vakhitov for the title in March. That was your most anticipated revenge. But you decided to withdraw from that fight. Can you share some details about your decision?

LT: “First I want to emphasize I respect Artem and I really do want to get my revenge on him. There was a lot of stuff going on in a very short period. Due to the war, there was a lot of uncertainty if the fight would be able to go through. Visa and travel issues, potential [lack of] approval from local authorities, sanctioning bodies, etc., etc. GLORY arranged a back-up fighter (at another weight) and literally did everything to pull this fight off. In last 10 days, the uncertainty about the fight went through the roof.

“At the same time, in Holland, fighting a Russian fighter became a really bad idea in the public opinion. Large companies took big financial hits, specifically in that week, due to the sanctions. Those factors, combined, made me conclude I had to make a decision on this matter, which I did. And you have to understand, this was also a very big hit for me financially. I really suffered in that perspective, and it took away my revenge I have been searching and working for, for years and years. So it was a very hard decision.

“Although GLORY, at that time, had a different view on the Russian-Ukrianian matter in regard to sport, they have been very understanding and cooperative to me. For this, I feel respected by GLORY, and I am happy with that.”

RN: On Jun. 17, GLORY announced the dismissal of all Russian athletes, including Artem Vakhitov. Many sport organizations have banned Russian athletes from competing. While others, like the UFC, didn’t react. In your opinion, how should sports organizations presently act in regards to Russia?

LT: “Personally I feel sports and politics should not interfere with each other. The reality is, in the real world, they do. For me, I would still really love to fight Artem. I think the UFC is a different case, because the war is far away from the USA. But for us, the war is much closer. This is a war in Europe. And it affects our economy and lives directly. So, I think there is a difference. And don’t forget, there are a lot of team members of fighters that are not allowed to be in the UFC. So it’s a lot more complicated.

“ONE [Championship] also cut all of their Russian fighters. So, personally, I feel it should be possible to fight Artem, or other Russian fighters, but the public opinion largely sees it otherwise, I feel.”

Now, with Vakhitov out, you are fighting Sergej Maslobojev for the light Heavyweight title at GLORY 81. Can this upcoming fight be considered the biggest fight of your career?

LT: “The fight against Sergej is indeed the biggest fight of my career. If you look at the numbers, he may be the biggest challenge up to date. He has beaten Alex Perreira, and has beaten Antonio Plazibat twice. He has more knockouts on his resume than Artem Vakitov has in professional fights. That says a lot.

“Besides, I consider this a career-defining fight. Winning this fight will set me up for bigger fights, bigger adventures and bigger dreams to pursue. The amount of attention this fight brings from the bigger audience, and the performance I will show on fight night, is going to catapult me into new dimensions.

“I plan to show my true abilities in the ring. That being said, Sergej has been knocked out by two legends in the game – Roman Kryklia and Maris Briebis. I plan to do the same.

“And besides, the GLORY light heavyweight belt is looking forward to being around my waist, I’ve heard. I got to honor the belt’s wish.”

RN: GLORY Collision 4 wass announced for October. Alistair Overeem versus Badr Hari is a great fight to watch, independent of Hari’s controversial fights. Who is your favorite and why?

LT: “The favorite fighter is me, myself and I. But, Badr is a spectacular guy and a fighter with an incredible fanbase. The brutal fact is that his last win was in 2015 against Ismael Londt. That’s seven years without a win. That fact really, really sucks.

“Overeem is also an aged fighter, and his resume in MMA the last few years has been variable. But, he had some good fights still.

“But in the end of the day, styles makes fights, and this one is really interesting, because both of them are in the winter of their fighting days. They are both big guys with strong finishes. I saw Overeem recently, and he is in a good mood and looks really fit and athletic. I expect a close fight, a lot of violence, and it won’t go the distance. My advice – get your popcorn and Coke ready, and see which of these giants will fall. And besides, if I am on the card, get some extra popcorn, you’ll enjoy it.”

RN: Former GLORY champion Alex Pereira is fighting Sean Strickland at UFC 276. Who do you think will win this one?

LT: “This is a very interesting fight. The UFC is giving Alex a shortcut to the title. It makes sense, because the storyline between Alex and [UFC middleweight champion Israel] Adesanya is extremely compelling. His first two fights were tune-up fights.

“Strickland is the real deal. But his fighting style is very, very suitable for Alex. So, the UFC is really helping him to get to the title fight. But that being said, Sean is a very serious test. Also in the standup, Sean is very elusive, very durable and right in your face all the time. And, he has zero conditioning issues. Alex won’t be able to put him away easily.

“There is also a factor very few people know. Sean is extremely skilled in his ground game. But he has never used that in his fights. If he does, Alex is gonna be in a world of trouble. I think Sean is going to win, but I won’t rule out a knockout win for Alex. 85-percent Sean, 15-percent Alex.”

RN: Who is the GOAT in kickboxing personally for you?

LT: “For me, it is, without a doubt, Giorgio Petrosyan. One of my all time favorite kickboxers is Dany Bill, by the way. A genius in the ring. Go and watch his fights!”