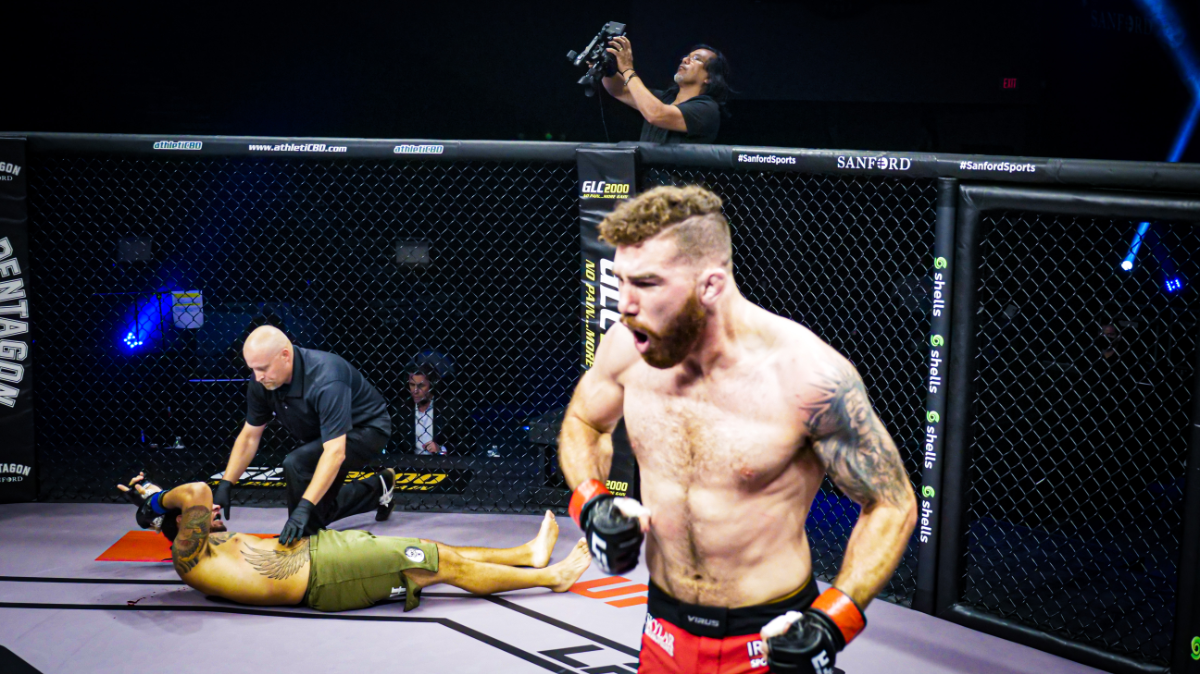 A seat at the table. Some might call it a goal or a destination. But, for many people success is the combination of hard work and opportunity. When those things collide, there might just be a seat at the table.

UFC newcomer Josh Fremd is the middle child of six kids, and a seat at the table can be a very real concept kids from large families. Fremd, who is from Connellsville, Pa., was raised by his parents in an athletic family, and one that fostered an environment of competition. He played football and baseball in high school, before discovering wrestling, and eventually MMA. He made his amateur debut in 2014, and his pro debut was three years later. Within two years, he had worked through the regional circuit, won a Bellator fight, and eventually landed at Factory X Muay Thai in Denver, Colo. He had been fighting for five years, was 4-1 as a pro, and was frankly barely getting started.

Fremd, like a lot of fighters, had a sole goal of making it into the UFC. There are multiple regional and developmental promotions that send attention to the UFC brass, and one of the top ones is Legacy Fighting Alliance. There are hundreds of LFA standouts and titleholders that have been absorbed into the UFC. Fremd went down that path, going three first-round finishes in a row in less than five months leading into Jan. 2021. In May 2021, he lost an LFA middleweight title bout to Gregory Rodrigues, took a step back in line, and Rodrigues got picked up by the UFC shortly after, taking a seat at the table. After winning his next fight at LFA 116, Fremd assumed he would be fighting for the again-vacant LFA title again, and things took a strange turn.

“It was a weird, weird opportunity that presented itself,” Fremd told Combat Press. “I can’t really let you know all of the facts or everything that was going on. All I know is that Coach [Marc Montoya] called me and was like, ‘Hey, we have this opportunity, what do you think about it?’ And, I said, ‘Alright, let’s ride.’ Because, I knew it was going to be [Dana White’s] Lookin’ For A Fight. And, I knew the Nelk Boys were gonna be there, so I was like, ‘That is a huge opportunity. I can’t say no to that.'”

Fremd showed up at FAC 12: Lookin’ For a Fight in Independence, Mo. on Feb. 22 to face Joel Bauman. They were the fourth-to-last fight on the card, and Fremd picked up a submission early in round two.

“I mean, I knew going into it he was a strong wrestler – a Division I wrestler – and, you know, he’s had a couple really good wins in LFA,” said Fremd. “It was funny, because we both fought for LFA, and then we both fought for that promotion. And, you know, he came out doing exactly what I thought he was going to do. He didn’t shoot the way I thought he was gonna shoot, so that was pretty cool. But yeah, I didn’t do too much studying, because when you have a short-notice thing like that, it’s you against him – who’s going to have the better instincts, the better abilities, things that are gonna actually matter in a fight. There’s no reason game plan for something like that.”

The Pennsylvania native had been working hard and waiting for an opportunity. He had faith the LFA would at least get him within striking distance, but decided to cut out the middle man when he had a chance.

“I had a contract that was supposed to be coming to me for the LFA title shot again,” Fremd explained. “But, you know, with the title shot it’s not a 100-percent guarantee that you’re going to get in the UFC. It might just give you an opportunity to get to a Contender Series fight with the middleweight title. You either get in, or you get a Contender Series fight. You know, I was reading the Will Smith book at the time. And, you know, my coach and I talked about it when this opportunity that they see popped up. It was like, I mean, there’s really no one else that I need to impress, except [UFC President] Dana White himself. So, Dana was going to be there. Everyone that makes the decisions was already going to be in the room. So why not take this opportunity?”

Out of all the impressive fights on what turned out to be a stacked card, Fremd was able to impress the boss. He and one other fighter were both awarded UFC contracts.

“It was a shock,” said Fremd. “Honestly, it really didn’t hit me – I kid you not – until a couple days ago when they offered me this fight. To me, nothing is ever set in stone. Even though people say something or whatever, you know, nothing is ever set in stone until it’s actually happening, I believe. And now they’re finally, like, I got a fight. They’re telling me I’m fighting next Saturday. Now it’s all starting to hit me. Like, I can go around and say, ‘Oh yeah. I’m just a UFC fighter.’ But, until I fight in the UFC, until I get a win in the UFC, I’m not a UFC fighter. I’m just a guy who has a UFC contract.”

“So, for some, it might seem quick. To me, it seemed a little bit longer, but I am happy truly how it played out, and the things that I went through to get here. You know, it’s been 10 years. I’ve been doing this for 10 years in March. You know, I had my very first amateur MMA fight on Mar. 15 – on Saint Patty’s Day – 10 years ago. So it’s a culmination of everything. And, it made me happy that I made the right choice coming out here, you know? I got around the right people. I got around the right group that is going to push me – the right coaches and teammate. It validates everything.”

It’s one thing to be told something, but how sure is anything in this world? Until someone has the proverbial “cash in hand”, they can never really be sure they’re going to get it. Well, for Fremd, that came in the following days.

“I got a contract,” said the newly minted UFC middleweight. “It was in the next few days after the fight. You know, obviously I was a giddy little kid. I printed it out. I read everything, even the fine print, like just a little dummy. But no, I mean, I knew it was going to be short notice. I had a feeling in my mind – the way things work. I just want to stay ready and prove that, you know, I am that guy that I say am. I’m ready for a fight whenever, whoever, and wherever, you know? I took time off work. I didn’t go back. And, I told my girl I was, like, ‘Just believe in me for the next month. Give me one month, because I truly believe that somethings going to happen. Someone’s gonna fall out. Something will happen.’ And, my management team, Iridium, is just the best. Jason House is always on his stuff, you know? And, he wants you to give him an opening. He’s going put who he thinks is going to be the best option. I’m glad that he thought of me, and here we are.”

Tonight, at the super-stacked UFC 273 card in Jacksonville, Fla., Fremd will make his promotional debut against Anthony Hernandez. Hernandez is coming off a second-round submission win in his last outing in Feb. 2021. He hasn’t fought since. The Contender Series alum is 2-2 in the UFC and 8-2 overall. Fremd is 9-2 in his pro career, and looking to make a big statement.

“I know that he beat Rodlfo Vieira,” Fremd elaborated. “I would like to believe that Rodolfo beat himself in that fight by gassing after a minute and 30 seconds. No, I think he’s a tough fighter. I think he has decent abilities. I think it’s going to be a good fight. I’m hearing that his strengths, and from what I’ve seen, is that he does really use his jiu-jitsu a ton. He’s mostly a ground guy. I think, yeah, I think on the ground is probably his best.”

Fremd, on the other hand, is a very well-rounded fighter. He has a wrestling background, and a couple submissions win, but he is also a hard-hitting striker with four knockout victories. While Hernandez is more seasoned in the UFC. Tonight, his big plan is to prove that he belongs.

“First and foremost, I want to get a win in the UFC,” said Fremd. “I want to validate that I belong, and that the seat that I got at the table was not given in vain – that I truly do belong there. I want to impress myself. I don’t really care too much about impressing other people, as long as I go out there and impress myself. I believe I’ll impress a lot of people.”