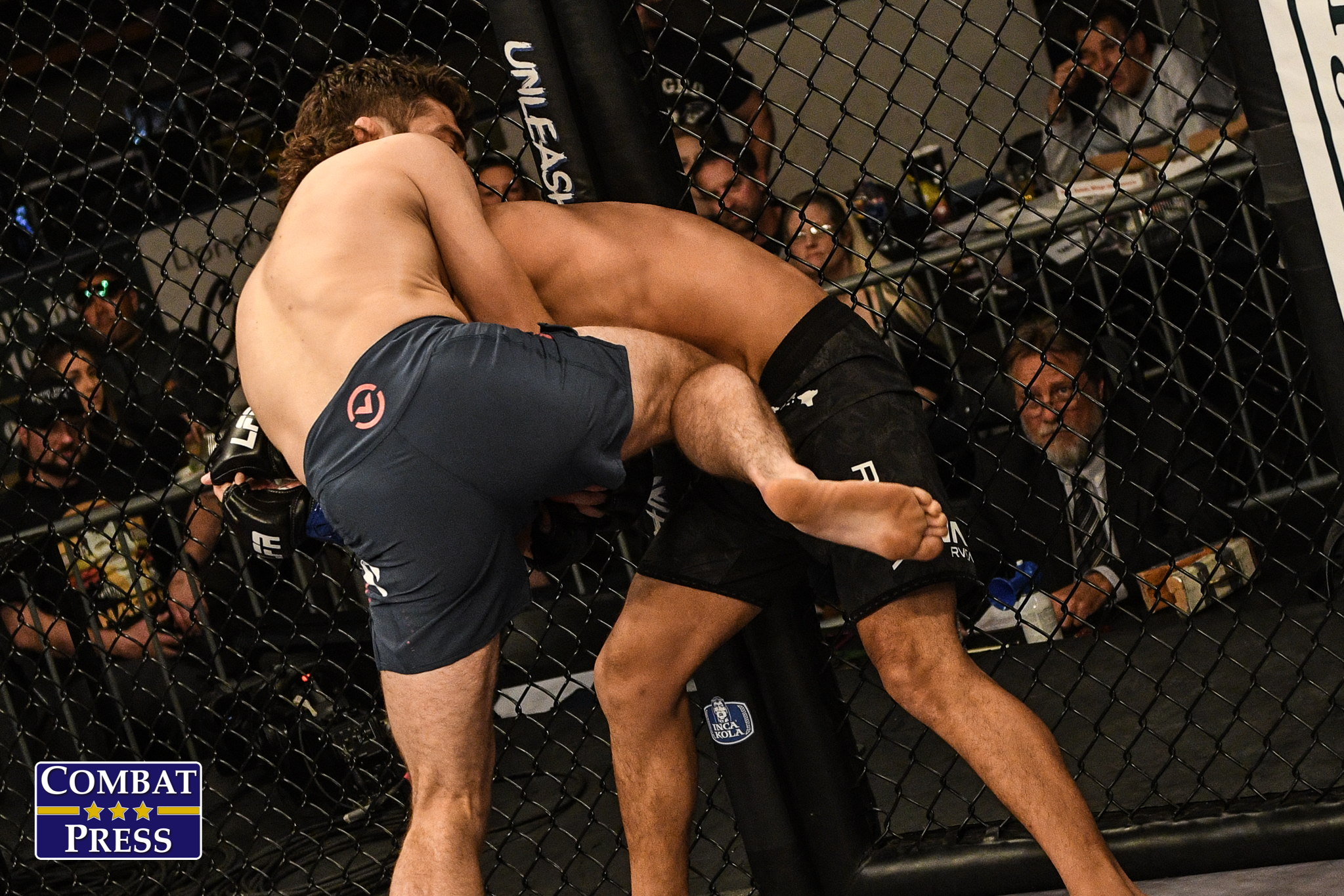 LFA 123’s Dan ‘The Determined’ Argueta: ‘I Beat Him Every Single Time’

The whole concept behind “The Secret” is the law of attraction. This essentially means that whatever ideas someone lets consume their daily thoughts is what their life will ultimately become – the good and the bad. So, when Legacy Fighting Alliance standout Dan “The Determined” Argueta was putting thoughts into the world, he didn’t realize, at the time, what his life was ultimately going to become.

Argueta grew up in Orland Park, Ill. – a suburb of Chicago – in a family of five. He started wrestling at a young age.

“I have a very, very close family,” Argueta told Combat Press. “Both my parents are immigrants. My dad is from Guatemala, and my mom is from Honduras. I grew up really good. I was wrestling, having fun with all my friends, being a shithead. Now, I look back at it all, and I’m like, ‘wow, my parents really did everything possible to make sure I’m living out my dream.’ As long as I was working hard, they made sure that it was in reach for me.”

The youngest of three siblings, Argueta has an older sister, who works as a military contractor, and a brother, who owns a mechanic shop. It was his brother who started floating the idea of MMA when they were young.

“When I was like 10 years old, I was already wrestling,” Argueta said. “My brother said, ‘hey, I think you should start fighting.’ I was like, ‘yeah right, I got to get good at wrestling first.’ And, you know, he still supports me to this day, always telling me how awesome it is that, you know, I followed that, and how this sport was made for someone like me.”

The transition to MMA was not something that Argueta had planned. In fact, wrestling ended up serving as his entry into MMA, and it was a bit by accident.

“After I graduated from college, Izzy Martinez – you know, he’s from the area – and I asked if I could come help out at his wrestling program,” Argueta explained. “A couple weeks in, he introduced me to Anthony Pettis. I didn’t even know who Anthony Pettis was. I going up in to Milwaukee, working with him. And, then, I met Cub Swanson and Juan Archuleta, and a couple months later, I went out to Albuquerque to train with Holly Holm. It was wild.

“So, when I started, it was just like happening, you know? I was coaching and helping a couple MMA fighters in the UFC with their wrestling. And, in order to be a good wrestling coach for fighters, you’ve got to do what with them? You have to fight with them. So, then I had to start learning how to fight a little bit more – get my martial arts up. Then, after meeting Cub Swanson and coaching with Izzy, and a year and a half had gone by since I first immersed myself in that world, I got a fight. They got me my first amateur fight. This all unfolded by chance. I didn’t realize that’s what we were doing.”

Argueta moved to Albuquerque to help out at Jackson-Winkeljohn a little over five years ago. At that point, the secret was slowly creeping out, and he didn’t even know it yet. About a year later, he made his amateur debut, losing by first-round submission. However, he would go on to win his next three fights, before making his pro debut at LFA 65 in Vail, Colo. in May 2019. He won that one by first-round TKO, and followed it with three first-round submissions in a row. For his fifth pro fight, he was back in the LFA Octagon for LFA 90. It was his first time going to decision as a pro, but he picked up the win, and this set him up to compete on The Ultimate Fighter 29.

TUF 29 was the reincarnation of the UFC’s flagship reality show, which hadn’t aired in two years. UFC featherweight champ Alexander Volkanovski, and then-number-one contender Brian Ortega served as the coaches. Argueta was the first pick for Team Ortega, which made sense, as he trains and lives in the Los Angeles area, which is where most of the coaches were from.

In his first-round bout, Argueta faced Ricky Turcios, who already had over twice as many pro fights as he did. He wanted the challenge and looked at it as a proving ground. He ended up losing to Turcios by decision, but, in hindsight, that wasn’t the worst person to lose to, as Turcios would go on to win his next fight, as well as the finale. Still young in his pro career, Argueta walked away with a valuable lesson.

“Fight IQ is real,” Argueta intimated. “As tough as I am, as good as I am at wrestling and grappling, fight IQ is the real thing. He had that over me. I chose to fight him. They asked me who I wanted to fight, and I chose him, because I knew he had the most experience. I knew he had some bigger shows, and I said, ‘I can beat this dude.’”

The realization of fight IQ was not the only benefit Argueta gained from the show. He felt like it helped calibrate his overall career, and it put him in the right direction.

“Before I left for the show, I was super nervous,” admitted the collegiate wrestler. “I just wanted to win the damn thing. Coach Jackson told me, ‘Relax. Relax. You’ll get there, and you’ll get your fight.’ What I learned about the show is that it’s a vehicle for our careers. That’s all it is. Just because you don’t win the show, doesn’t mean that you’re not one of the best fighters – one of the best prospects – coming through. After I finished up on it, I realized it is just a vehicle for my career. It helped me gain these fights. It helped me gain traction. All I have ever wanted since I started this sport is for the world to see how fucking hard I’ve worked. That show did it for me.”

After TUF 29, Argueta was back in action at LFA 116 less than six months later, and he picked up his sixth pro win, and fifth stoppage victory, to remain officially undefeated. The only catch was that he missed the 136-pound limit by two pounds. But the show went on, and he was happy with his performance. Now, at 6-0, Argueta will headline his first event for the promotion, when he faces Mairon Santos as the main event of LFA 123 tonight, live from the Chicagoland area at the Horseshoe Hammond Casino. It will be his first time fighting in front of the hometown crowd since Sep. 2019.

On paper, the Brazilian Santos appears to be a tough opponent. He’s 12-0 as a pro, and most of his wins are by stoppage. However, upon further review, four of his previous opponents had losing records – one was 1-12 at the time – and those made up four of his seen finishes. The more game opponents are the ones he has seemed to have trouble putting away. Argueta is confident in getting a victory tonight.

“He’s got a nice skill set,” Argueta said. “He’s young. He’s got a lot of fights. He wants something that he cannot have. It is mine. I win that fight ten out of ten times. I beat him every single time. If you actually watch my amateur career, you’ll see everyone that I fought has the same build as him. Everyone I fought was a purple belt. Everyone I fought had long-ass legs like him. Now we’re doing it at this weight class, where I’m a fucking monster at this weight class. He’s still a boy.”

Argueta is not only a well-rounded fighter, but he also has a very broad training program. While being a member of the Jackson-Wink fight team, he lives in Los Angeles, where his girlfriend is in grad school at USC for the next couple years. And, being a close friend and training partner of Swanson, there are a few other places he trains in California as well. Whether it’s the UFC Gym in Costa Mesa, the RVCA Training Center, or at the Gracie Barra Headquarters under Philipe “Furao”, Argueta has no shortage of coaches and training partners.

“I can’t plan it,” said the Illinois native. “If I don’t have a fight, and someone out there has a fight, I have to be out there with them, because they help me with mine. If I’m in fight camp, I’ll go to New Mexico for two weeks. I kind of just have to make the best out of it every single time.”

Argueta had no idea when he was a kid that he would be pursuing a career as an MMA fighter at 28 years old. But even his brother was putting that thought into the world, and, now, here he is. Tonight will be the first of what he is hoping is four fights this year. In addition to that, he has a couple other goals.

“I do not want to step on the scale over 160 pounds,” Argueta said. “And, I want to stop being late all my practices and appointments. Those are my goals for this year. Coach Jackson calls me Dan ‘The Determined To Be Late.’ I was late to meeting him. I should have met him years before.”

LFA 123 airs tonight, live on UFC Fight Pass starting at 9 p.m. ET. Argueta will be taking on Santos in the main event, and he’s excited to be back home in front of what is likely to be an electric crowd.