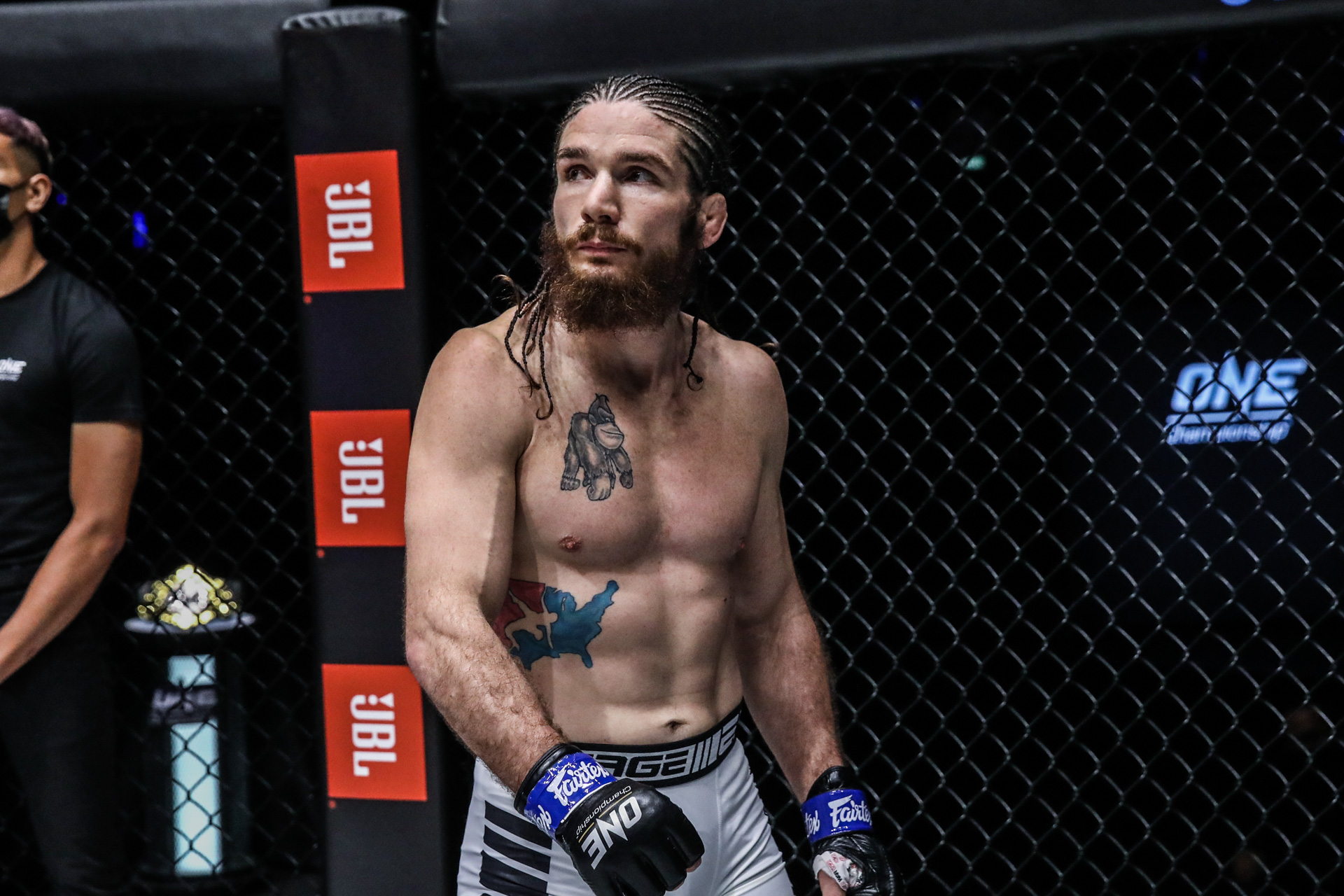 While any competitor in any sport would love to have an undefeated career with only wins, sometimes an occasional loss is more important than all the wins combined.

James Nakashima was an NCAA Division I wrestler out of the University of Nebraska, before shifting his focus to mixed martial arts. The Illinois native started training at Premier Combat Center in Omaha, before making the move to John Crouch’s MMA Lab in Phoenix, Ariz. After going 2-0 as an amateur, he went pro in Jan. 2015. After dominating the Resurrection Fighting Alliance – eventually, the Legacy Fighting Alliance – he entered ONE Championship at 9-0.

In Nakashima’s ONE promotional debut, he beat a highly touted prospect and protégé of Khabib Nurmagomedov, Raimond Magomedaliev, before winning two more and earning a middleweight title shot again Kiamrian Abbasov in Nov. 2020. Unfortunately, his seven-year, 14-fight winning streak came to an end by fourth-round TKO in that title tilt. He tried to bounce back quickly with a Jan. 2021 fight against longtime veteran Shinya Aoki, but again suffered defeat – this time by submission. It was time to reflect.

“The title-fight loss was obviously really tough,” Nakashima told Combat Press. “That was a huge goal of mine, and I had it in the bag. I was dominating the whole fight, I felt like. And to get clipped like that, you know, it was tough. Once I got clipped, I don’t remember the last minute or so.

“I just took that Aoki fight so fast after that title fight. It was less than five weeks after that. I took it on short notice, and I was still a bit rattled. Trying to chase one loss, and trying to do that against somebody like Shinya Aoki was not something I should have done. And, I underestimated him, which was a joke. He’s a beast, and I wish I could have that fight back.”

After the Aoki loss, Nakashima needed to rethink his training. For years, he was so focused on just getting the win, and keeping his streak alive, that he lost sight of truly focusing on getting better. With so many fighters being forced to train outside of their gym through much of the pandemic, he decided to combine some of that training with his regular training with Crouch.

“After those two losses, I took a year off, and switched up a lot of things in my training,” Nakashima explained. “I just feel like I’m getting better.

“Like, the Lab’s still my base, but it’s also a lot more individual work. Like, my friend is really good at jiu-jitsu. I’m a little bit bigger than him, so if we were to compete, I’d beat him, usually, because I’m a better wrestler and bigger. But, he’s better at pure jiu-jitsu, and he cares about my development in MMA, and he helps me. We do a lot of that work at my house. That kind of started during COVID.”

Another avenue that Nakashima had pursued prior to the pandemic was training in Italy with one of the greatest kickboxers of all time, Giorgio Petrosyan. It was a chance encounter that led to the two connecting, and after that, Nakashima had added a new training partner to his regimen.

“When I made my ONE debut, Armen [Petrosyan] was fighting on that card, and [Giorgio] was cornering his brother Armen,” Nakashima explained. “I just asked him for a picture, and then we just kind of talked throughout the week. The morning after the fight, we were at breakfast, and I asked him if I could come out and train with him. We got each other’s information, and I went out there the following month.”

In total, Nakashima had spent three separate months training in Italy with Petrosyan, and it was a goal to keep going back until the pandemic struck, which affected the ability to travel to Italy. So, in the meantime, he needed to find a kickboxing partner closer to home.

“Over the last year, I started working with this GLORY Kickboxer out of Scottsdale, Nick Chasteen, and he gives me a lot of individual attention,” Nakashima said. “I feel like it’s really helped my game. It’s the most similar thing I have found to Petrosyan’s style. Another thing that I feel like is really helping my grappling game is working with Timmy Welch and [UFC bantamweight] Sean [O’Malley] over at their gym. They have an open mat on Friday and a lot of really good people from Phoenix show up.”

After a year of improving since his loss to Aoki, Nakashima will be returning to the ONE Circle tomorrow night on the main card of ONE Championship: Heavy Hitters. Standing across the cage will be another one of Nurmagomedov’s protégés making his promotional debut in the form of Saygid Izagakhmaev. This one was not on short notice, as Nakashima has had 10 weeks to prepare.

“He’s a really, really tough guy out of Khabib’s camp,” admitted Nakashima. “He’s my second guy out of the Eagle’s camp, so I know he’s a tough Russian, a really good grappler, and does really well under pressure. I feel like I’m the better fighter. I think he’s well-rounded too.”

Unlike Magomedaliev, who only had five pro fights under his belt when he faced Nakashima, Izagakhmaev is coming in with a 19-2 record, having finished most of his opponents. However, the former D1 wrestler only expects high-level competition at this point. And, frankly, that’s all he wants.

“I love it,” expressed Nakashima. “They’d offered me a fight earlier in the year, but I had just gotten the coronavirus. ONE is awesome. I love the tough competition. When I made my ONE Championship debut, another Eagles guy was making his ONE Championship debut, and they were filming him too. But at this level, anymore, you know I was undefeated for a long time, and I fought for title and I was almost winning it. At this level, I just think they’re all going to be tough. I like it.”

Nakashima is a very soft spoken and cerebral fighter. He practices meditation regularly and has a really strict diet, which he embraces with the help of a nutritionist. All that is very important, as ONE is the only organization that requires fighters to pass a hydration test at weigh-ins. This makes it crucial to be on point at all times. Combining his discipline with his wide array of training, he will be more than ready to end the hype of another highly-touted Russian prospect.

“I just want to think a little bit bigger,” Nakashima elaborated. “I was winning, and I was undefeated. I wanted to keep that winning streak going, and now that it’s gone, I think I have to switch it up a little bit. I’ve got to fight. That’s why I’ve been working on improving my striking and my grappling. I’ve got to get finishes, not just win. I need to do something special – some cool stuff. I think it’s a really big deal to get the finish. I think that would give me a lot more leverage on opponents in the future.”

While Nakashima is not looking past his next opponent, his does have some plans for after his fight. When travel and time permit, his girlfriend and he plan to take their four-year-old daughter down to Italy to live for a couple years. He wants to spend more time training with Petrosyan. But, first things first. He has a fight to win tomorrow night.

The main card of ONE Championship: Heavy Hitters kicks off on YouTube starting at 7:30 a.m. ET, live from the Singapore Indoor Stadium. Nakashima and Izagakhmaev will be the feature fight just prior to the co-main event, as the two face off in a lightweight affair.