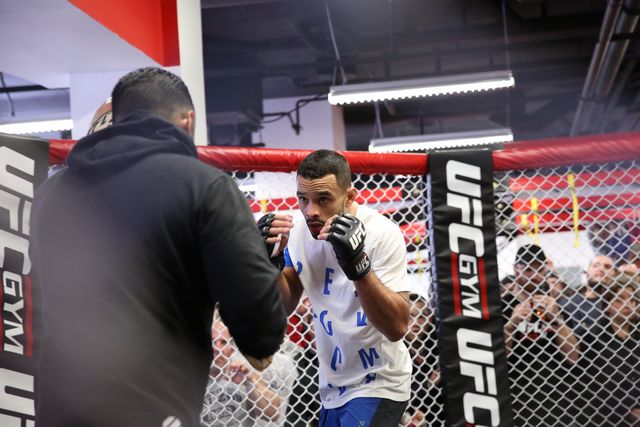 Will Rob Font Remind Fans of His Champion Pedigree?

On Saturday, Dec. 4, live from the UFC Apex in Las Vegas, Nev., Rob Font takes on José Aldo in the main event of UFC Fight Night: Font vs. Aldo. This top-contender match-up could determine one of the next challengers for the UFC bantamweight championship.

In recent months, Font has been somewhat forgotten about in conversations regarding the title picture at 135 pounds. Will he remind fans of his title credentials this Saturday?

Font is on a four-fight winning streak and has established himself as one of the best in the division. There has been much debate recently regarding who the best boxer is in the UFC, and Font has a great claim to be that fighter.

Training out of the New England Cartel team in Massachusetts, Font has climbed the rankings with a predominantly boxing approach. The 34-year-old has a long reach for the division at 71 inches, and this helps him pick opponents apart from a distance. He has an excellent jab, which he uses to great effect. He also possesses outstanding footwork, which enables him to be adept at avoiding being backed up and cornered. Font is not renowned for his one-punch knockout power, but, instead, inflicts damage through a combination of timing, accuracy and volume.

Many believed that a dominant win over former champ Cody Garbrandt would give Font the spotlight that he merited, but this did not materialize. Font delivered a striking clinic, out-landing Garbrandt 183 to 78 in total strikes and hurt him on several occasions. He secured a comfortable unanimous decision victory. In spite of the one-sided nature of the fight, Font’s profile did not seem to dramatically increase in the aftermath. This was partly due to his quiet character, and was, perhaps, also due to the fact that he failed to knock out a man who had been knocked out in three of his previous four fights.

The events that occurred at bantamweight in the following months also contributed to Font not being at the forefront of people’s minds. Another former champion, T.J Dillashaw, made his return to action in July following his two-year suspension after testing positive for performance-enhancing drugs. He took on Cory Sandhagen in a back-and-forth contest, in which Dillashaw emerged victorious with a controversial split decision. This fight appeared to be a number-one contender bout. Therefore, Dillashaw seemed to have won the right to face the winner of the Aljamain Sterling and Petr Yan title-fight rematch, which was scheduled for UFC 267 in October. However, Dillashaw suffered a knee injury in the second round on his last fight, which required him to get surgery that would keep him out of action for a prolonged period.

The title picture was further complicated when Sterling pulled out a month before UFC 267, citing lingering issues with his neck following a neck surgery. With number-one contender Dillashaw in recovery, the UFC reportedly made an offer to Font to take on Yan, but he reportedly turned it down and preferred to keep his fight with Aldo intact. The UFC subsequently went to Sandhagen to replace Sterling to face Yan in what was now an interim UFC title fight. Yan would proceed to overcome a slow start in that fight to win by unanimous decision.

This Saturday, Font has a chance to make a statement when he takes on Aldo. After suffering a brutal beatdown in the final couple of rounds of his bantamweight title fight with Petr Yan in 2020, many believed that the Brazilian’s days as an elite level fighter were over. The former UFC featherweight champion has since had a career revival. In his last outing against Pedro Munhoz, he delivered a striking masterclass in which he showcased the skills that once made him a dominant champion.

Font does seem to have a weakness in his takedown defense that can be exploited by high-level grapplers. Both Marlon Moraes and Garbrandt were able to take him down, despite primarily being strikers themselves. While the top of the bantamweight division is striker-heavy, the likes of Yan, Dillashaw and Sterling all have accomplished ground games. In his path to becoming champion, Font is likely to encounter one, if not all, of those athletes. Therefore, his defensive wrestling is something which will need to improve.

Aldo has been a pure striker for much of his illustrious career, but his fight with Marlon Vera showed that he now may be more willing to grapple. Heading into the third round of that contest, both fighters had seemingly won one round each. Aldo trapped Vera in a body lock early in the third, and managed to hold him in this position for the remainder of the round. He won the round and, consequently, the fight. Font will need to be wary of being controlled in a similar manner.

The fact that this fight is going to be five rounds seemingly plays in Font’s favor. Aldo is rejuvenated, but questions persist about his ability to win a five-round fight. He fatigued badly in the championship rounds against Yan, and he deployed a stalling position in the third round against Vera, suggesting that he was tired in that contest as well. Font demonstrated against Garbrandt that he can sustain a high output for five rounds. If he makes an aggressive start, and forces Aldo to work, then he could deplete the Brazilian’s gas tank fairly quickly and exploit his conditioning issues.

The 34-year-old Font could also look to take control of the fight by initiating grappling sequences himself. Aldo has been very difficult to take down throughout his career, but he has been controlled on occasions when he is fatigued. Alex Volkanovski had success by pushing Aldo up against the fence and keeping him in the clinch. Font did take the aforementioned Garbrandt down twice in three attempts. He is also one of the bigger fighters at bantamweight. The New England native has had several fights at featherweight and is, therefore, unlikely to have a strength disadvantage against Aldo, unlike other 135-pound fighters.

Since Yan captured the interim title, the once scheduled rematch between the Russian and the now-sidelined champion Sterling looks like it will take place in 2022. In order to stake his claim to fight the winner, Font will need to deliver an impressive showing on Saturday. Aldo is not the fighter he once was, but a victory over him still holds great meaning considering his status in the sport. Font’s reticence about promoting himself outside of the Octagon makes it especially vital that he captures fans’ attention with his performances. Aldo has only been knocked out four times in 37 professional fights, and only one of these has been before the third round. Disposing of the former champion in quick fashion in a main event will give Font the biggest spotlight of his career. If he can pull this off, a title shot will seem inevitable.