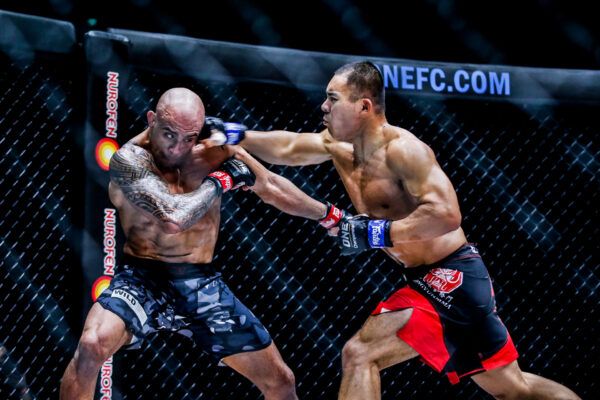 It’s a well-known fact that one of the most exciting and stacked divisions in mixed martial arts has always been the middleweights. In most promotions, that would be the 185-pound weight class, and in ONE Championship, with their hydration rules, this would be the 205-pound guys.

It’s no surprise that middleweights are some of the most perennially exciting fighters. There is something to be said about guys, who almost all walk around at over 200 pounds, being able to mesh together big frames with a ton of skill. For the most part, the middleweights can throw big bombs with knockout power, while also being able to showcase stamina, quick footwork, and slick submissions.

On Friday, Dec. 17, ONE Championship: Winter Warriors II will air on YouTube, starting at 7:30 a.m. ET. The previously recorded event features two of the top-ranked ONE middleweights when former champ Vitaly Bigdash takes on Rong Fan in a catchweight feature bout on the main card.

The 37-year-old Russian Bigdash currently sits at 10-2 as a professional. He went 9-0 to kick off his career with all but one of his wins coming by stoppage. His only decision was when he captured the ONE middleweight title from Aung La N Sang in Jan. 2017. It would prove to be a title he gave back to Sang only five months later in a rematch. Bigdash lost his next fight in May 2018, won the following bout in Dec. 2018, and since then, he hasn’t fought due to either staph infection or COVID-19.

Bigdash has been out of action for way too long, considering he hasn’t been injured. He is looking forward to getting back to action against Fan.

Fan, a 28-year-old Chinese fighter, is currently sitting at 14-2 as a pro. His only losses were in his pro debut in Jan. 2016 and a tapout to Reinier de Ridder in the ONE Circle three years later. De Rider is now the current champ after choking out Sang in Oct. 2020.

Like Bigdash, Fan only had one decision before entering ONE Championship. And, he has only had one decision since. Since his sole loss in the promotion, Fan has put together back-to-back wins with his last one coming over Brazilian jiu-jitsu ace Yuri Simoes in Nov. 2020. When he meets his Russian opponent, their will certainly be title implications.

De Ridder currently sits at 14-0, and “The Dutch Knight” has only gone the distance twice in his career. After taking one belt from Sang, he turned around and took Sang’s other belt in Apr. 2021, creating a historic shift as a two-division champ by defeating the same incumbent twice in a row.

Going into the battle between Bigdash and Fan, fans can expect nothing but the proverbial fireworks. Both of these guys are crushers with a tremendous ability to finish fights. While Bigdash might be the betting favorite, it would be unwise to sleep on Fan. Regardless, this match-up will be an exciting one, and the winner will most likely be next in line for a title shot in one of the best divisions in MMA.