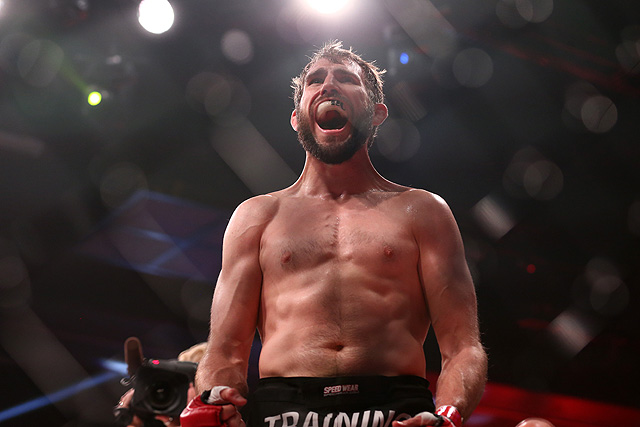 Bellator 148’s Ryan Couture: Making a Name for Himself

Since he’s the son of one of the best mixed martial artists of all time, Ryan Couture knew what to expect when he decided to follow in his father’s footsteps.

Couture’s father, of course, is former UFC heavyweight and light heavyweight champion Randy Couture. Ryan Couture started his professional MMA career in 2010 after compiling an amateur record of 5-1-1. He brings his professional record of 10-3 to Bellator 148 on Jan. 29. He was scheduled to face Derek Anderson, who had to drop out because of injury. Anderson was replaced by Patricky “Pitbull” Freire, the brother of former Bellator featherweight champion Patricio “Pitbull” Freire.

“It’s kind of been my lot in life to have something come up late with my fights,” Couture told Combat Press. “But I take it in stride. It’s exciting to face a well-known name to help establish myself in Bellator.”

Couture said watching his dad compete in the UFC first piqued his interest in MMA. He also had a childhood love of karate and martial-arts films.

“I would practice karate kicks all over the house,” Couture said. “I would kick anything that wasn’t bolted down to the floor.”

When Couture “fell in love” with MMA and wanted to fight full-time, he talked with his father about it.

“But I knew what to expect,” Couture admitted. “It didn’t deter me. The spotlight was on me a lot sooner than most guys who were in my position, but in the long run it was kind of a blessing.”

Despite the expectations, it still took the younger Couture a little while to get used to the attention.

“I’m a pretty shy person in general,” Couture said. “Any kind of public speaking stressed me out. But I’m also a pretty methodical person, so I made sure I was as prepared as possible.”

Couture trains with Xtreme Couture, the same team his father helped to start up. He began his professional career in Strikeforce before a brief two-fight stint in the UFC in 2013. Unfortunately, Couture was released after losing back-to-back fights to Ross Pearson and Al Iaquinta.

After Ryan’s release, his father gave an interview where he said he believed his son was treated unfairly because of tension between himself and UFC President Dana White. However, Ryan believes he was treated well and professionally during his time in the UFC.

“I expected to get tough fights,” Couture said. “I had a similar record to Al [Iaquinta] when we fought, and he was just tougher than I may have given him credit for.”

Couture also expects a tough fight against Freire at Bellator 148, but he hasn’t changed his training too much to prepare for a new opponent. Couture sees this fight as an opportunity to establish himself as a top contender in Bellator’s lightweight division.

“I just have to figure out how to steer the fight toward my comfort zone and to my strengths,” Couture said. “I feel good about it.”

Couture won his first two fights in Bellator. Throughout his time there, as well as in Strikeforce and the UFC, Couture said there’s something to take away from each of his fights.

“You’re always going to be locked in a cage to fight,” Couture said of his experience in various organizations. “I feel great about where my career is going, and I’m just trying to continue to build my professional experience and get more efficient.”

As the son of an MMA legend, the expectations have been high for the younger Couture. However, this is Ryan Couture’s time to shine. He’s not just Randy Couture’s son. He’s a fighter in his own right, and he’s out to make a name for himself.