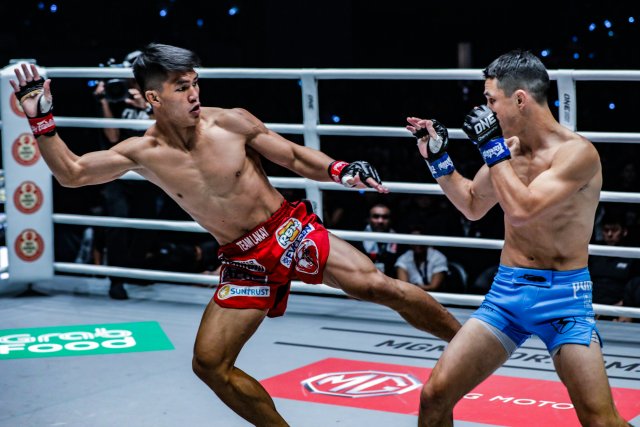 ONE Championship will host their final event of 2021 when they air ONE Championship: Winter Warriors II on Fri., Dec. 17. The event features seven MMA bouts, one kickboxing bout, and one Muay Thai bout. Although the fight card lacks superstars, missing this event would be a mistake. From top to bottom, Winter Warriors II has the potential to be one of the best events of the year.

In the main event, Danny Kingad and Kairat Akhmetov go to war for the chance to earn a title shot against the champion Adriano Moraes. Both fighters have lost to Moraes and look to gain revenge. Before thinking about a title shot, the headliners need to find a way to win on Friday.

The co-main event features Kevin Belingon taking on Kwon Won Il. Belington has lost three fights in a row that included two title fights. Meanwhile, Kwon takes a step-up in competition to show that he is ready for the best in the division.

Also, ONE Championship: Winter Warriors II displays some of the top Russian talent in ONE Championship with Vitaly Bigdash, Murad Ramazanov, and Yusup Saadulaev all competing.

The pre-recorded event will air on YouTube starting at 7:30 am ET on Friday.

The main event is a title eliminator bout in the men’s flyweight division; does perennial contender Danny Kingad earn a shot at the belt or will former champion Kairat Akhmetov get a chance to reclaim what he once held?

Kingad and Akhmetov find themselves one win away from another shot at beating Moraes. This main event match-up maintains the classic style clash of grappler vs. striker. Although both fighters can mix it up, Kingad tends to rely on grappling, and Akhmetov tends to strike to find success. Both fighters tend to go the distance, so expect this one to be a calculated war.

Former champion Akhmetov has won three decisions in a row. His precise striking makes opponents get uncomfortable on the feet. The only trouble for Akhmetov has been from grappling-heavy fighters that win the judges over with control time. Therefore, Kingad could find success.

Kingad always remains calm and waits for his opponent to make a mistake so he can score a takedown. If Akhmetov gives Kingad the opportunity, Kingad could score the takedown needed to dominate Akhmetov, potentially getting a finish.

Former bantamweight champion Kevin Belingon meets hard-hitting Kwon Won Il in the co-main event; how does this fight play out inside the cage?

Belingon vs. Kwon is a fight that can be seen differently depending on your perspective. Due to Belingon losing three in a row, some see this fight as a potential “passing of the torch” to Kwon. Others see this match-up as Belingon’s last chance to get back on track. Finally, Kwon’s exciting fight style and potential leads people to see Belingon as a stepping stone. Both fighters are knockout artists looking to get closer to a title shot.

Kwon has made a name for himself in ONE Championship as a hard-hitting future contender. Although Kwon has earned respect, his experience is nothing compared to Belingon’s. Kwon needs to be careful of making a mistake, because Belingon will be ready to capitalize. Kwon has a bright future, but Belingon needs this win more than ever. Belingon should be able to tough-out a decision and find himself back in the win column.

Vitaly Bigdash snapped a two-fight losing streak in his last outing; does he continue to build back momentum with a win over Fan Rong in their catchweight bout?

At 37 years old, Bigdash looks to get back to a title fight before he retires. In order to do that, Bigdash needs to extend his winning streak to two against Fan Rong. Holding a record of 14-2, Rong tends to put the pressure on his opponents. On the contrary, Bigdash is a counter striker that adapts to whatever his opponents do. The winner of this fight may come down to volume striking.

Although Rong likes to apply pressure, his lack of volume can be concerning. Bigdash is comfortable fighting on his back foot and finds success throwing volume on the counter. After winning his last fight, Bigdash should come in with confidence. If Bigdash can stay on the move and land often, he should come out with another big win.

The sleeper match-up is between Stephen Loman and Yusup Saadulaev. With potential title shot implications, both fighters are ready to do whatever it takes to win. Loman is making his ONE Championship debut after dominating in BRAVE CF. Meanwhile, Saadulaev is on a three-fight winning streak with hopes of using Loman as a stepping stone to a title shot. The difference in this match-up will be where the fight ends up.

Although Saadulaev has dominated grappling, his intense pressure can cause problems for some opponents. Unfortunately for Saadulaev, Loman has impressive counter striking and adapts well throughout the fight. At 29 years old, Loman has several solid wins and continues to evolve into a world champion. Saadulaev needs to get the fight to the ground, because Loman’s striking should be superior. Overall, Loman should outclass Saadulaev and finish the fight by knockout to make a statement.