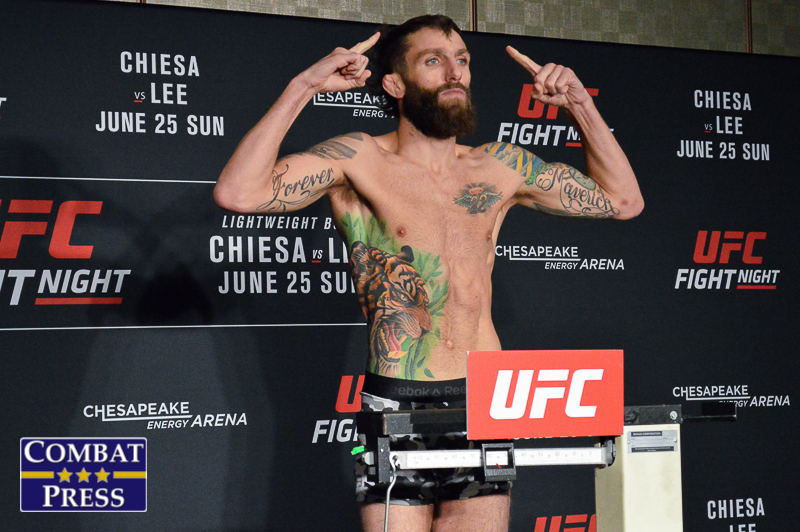 The final quarter of 2021 is jam-packed with high-profile bouts including six title fights, and other appearances by the likes of Max Holloway, Jose Aldo, and Derrick Lewis. With a lot of action to look forward to, it’s easy to overlook some of the under-the-radar fights that will land on the year’s remaining cards. Here are five fights every mixed martial arts fan should have circled on their calendar for the rest of the year.

It’s easy to forget the remainder of a card when it’s headlined by two of the most exciting fighters on the UFC roster. Max Holloway and Yair Rodriguez headline UFC Fight Night 197 on Nov. 13 for a fight that may very well determine who is next in line for a UFC featherweight title shot. Also on that card is a potential “Fight of the Night” contender, which comes in the form of Miguel Baeza versus Khaos Williams. This is a a contest that could define the future of welterweight rankings.

These days, it’s rare to see a fighter compile three finishes in his first three UFC appearances. Baeza did just that when he entered the Octagon 7-0 as a pro, and then defeated Hector Aldana, Matt Brown and Takashi Sato in just 13 months. He followed up his impressive 10-0 start with an epic three-round war against Santiago Ponzinibbio last June. That one earned both combatants a “Fight of the Night” bonus. Despite coming up short against the Brazilian, the 29-year-old Floridian undoubtedly proved he has what it takes to compete with the top of the division. He will look to earn a top-15 ranking going into 2022, but he will first have to face Williams.

If you have not seen Williams’ knockout of Abdul Razak Alhassan, I suggest heading over to YouTube for a quick view of just how hard this Michigan native hits. Williams had a hot start to his UFC career when he finished Alhassan after putting away Alex Morono in similar fashion in his UFC debut nine months prior. Both fights ended by first-round knockout in 30 seconds or less. The second one earned him a main card slot against the entertaining and elusive Michel Pereira. Williams came up short in that one by unanimous decision, but he rebounded quickly with a decision win over Matthew Semelsberger several months later. Still only 27 years old, and continuously improving in every bout, Williams is certainly a top pick to enter the conversation of top-15 welterweights heading into 2022.

Baeza and Williams are both prolific strikers capable of knocking out anyone who dares to stand across from them. The pair combine for 13 professional knockouts and will put on one of the more memorable striking battles come Nov. 13. Be sure to tune in when these two meet in the center of the Octagon and swing until one goes down for the count.

If an action-packed grappling affair featuring two prolific jiu-jitsu black belts sounds appealing, look no further than the top-15 welterweight matchup between Michael Chiesa and Sean Brady. The pair are set to meet on Nov. 20 at UFC Fight Night 198 and will likely slide into the co-main event slot right before Kelten Vieira and Miesha Tate square off.

Moving to welterweight has easily been the best career decision for the seventh-ranked Michael Chiesa, who compiled a four-fight winning streak once committing to a 170 pounds. He defeated Carlos Condit, Diego Sanchez, Rafael dos Anjos and Neil Magny, before falling victim to a D’Arce choke, courtesy of Vicente Luque in Aug. 2021. Nevertheless, Chiesa remains one of the most talented grapplers in the division whose improving striking, and overall resilience, will always make him a dangerous foe.

Pairing Brady with Chiesa shows just how high the UFC is on the undefeated Philadelphia native who has compiled a 4-0 UFC record since his debut in 2019. Brady is a superb grappler with a solid Muay Thai background that allows him to find success against his opponents both on the feet and ground. He is currently number 13 in the UFC welterweight rankings and can quickly find himself in the top eight of the division with a victory over Chiesa.

This will be a grueling affair that will see multiple transitions and momentum changes, and the toughness will be on full display. While I do expect Chiesa to win a convincing decision due to size and experience, Brady will show he can hang with the division’s elite, as the pair put on a stellar battle to remember.

It is possible that the featherweight clash between Josh Emmett and Dan Ige could go overlooked due to the immense star power being featured at UFC 269. With a card featuring the likes of Dustin Poirier, Charles Oliveira, Amanda Nunes, Jorge Masvidal, Leon Edwards and Dominick Cruz, it will take an incredible showing to steal any attention from what could be an epic card to close out a year. However, if there are two names capable of doing so, it is Emmett and Ige.

Numerous injures to the face and left leg have derailed what should have been an incredible road to a title shot for the seventh-ranked Emmett. The Arizona native has undoubtedly established himself as one of the hardest hitting featherweights to ever step foot in the Octagon. He has racked up stoppage victories over Ricard Lamas, Michael Johnson and Mirsad Bektic. He most recently met Shane Burgos in a co-main event showdown in June 2020 where the pair stood in front of each other for three full rounds, which resulted in a unanimous decision victory for Emmett. Unfortunately, he suffered multiple leg injuries, including a torn ACL in his left knee. Fully recovered and ready to get back on track, Emmett will need a big showing to continue his winning streak and secure a top-five featherweight for his next UFC appearance.

After losing in his UFC debut to Julio Arce, Ige embarked on an epic six-fight winning streak, including wins over Kevin Aguilar, the aforementioned Bektic and Edson Barboza. He was then tasked with meeting Calvin Kattar in a five-round war in July 2020. He ultimately suffered a unanimous decision defeat, despite a great showing. He rebounded with a first-round highlight reel knockout of Gavin Tucker, which led to a main event showdown against “The Korean Zombie” Chan Sung Jung several months later. Despite a 1-2 record in his last three UFC appearances, the ninth-ranked Ige has established himself as one of the most durable and improving featherweights on the UFC roster.

Expect this bout to be an absolute barnburner, as both top-10 featherweights look to exchange heavy blows and chase the knockout. The power advantage certainly goes to Emmett, but Ige certainly possesses the more fluid and polished striking.

It is truly incredible that Cub Swanson and Darren Elkins have never squared off in the Octagon. Swanson’s best days are certainly behind him, but he still possesses some of the most fluid and dynamic striking we have seen in UFC featherweight history. After establishing himself as a top-five featherweight for several years, Swanson went on a four-fight losing streak that effectively knocked him out of title contention. However, he rebounded with two impressive performances against Kron Gracie and Daniel Pineda before suffering a first-round knockout loss to the surging Giga Chikadze. Swanson still has one of the most illustrious careers in UFC featherweight history. His record includes wins over Charles Oliveira, Dustin Poirier, Jeremy Stephens, Doo Ho Choi, and Ross Pearson, making him a must-watch name on any card where he is featured.

It is impossible to make a list of toughest UFC fighters in history without putting Elkins near the top of the list. He has had more comeback victories than anyone else in the division and continues to shock the mixed martial arts world with his durability, resilience, and desire to win. His most notable winning streak started in 2015 when he went on a 6-0 run which included victories over Chas Skelly, Dennis Bermudez, and Michael Johnson. His comeback win over the aforementioned Bektic was specifically impressive, as Elkins suffered an absolute beating before coming back to score a third-round knockout. Fresh off a TKO victory over Darrick Minner, and riding a two-fight winning streak, Elkins will look to make it three in a row come Dec. 18.

This fight will be the most realistic version of a Rocky fight we have seen in recent memory. Swanson will look to dance around the slower Elkins and fire off multiple jabs and legs kick to bloody Elkins early. He will attempt control the center of the Octagon similar to what Apollo Creed did to Rocky. On the other hand, Elkins will continuously march forward and look to get inside the jab of Swanson, in an effort to pour on some serious damage to Swanson’s body and possibly a secure a takedown. This bout will steal the spotlight at UFC Fight Night 199 and enter the conversation of “Fight of the Year” for 2021.