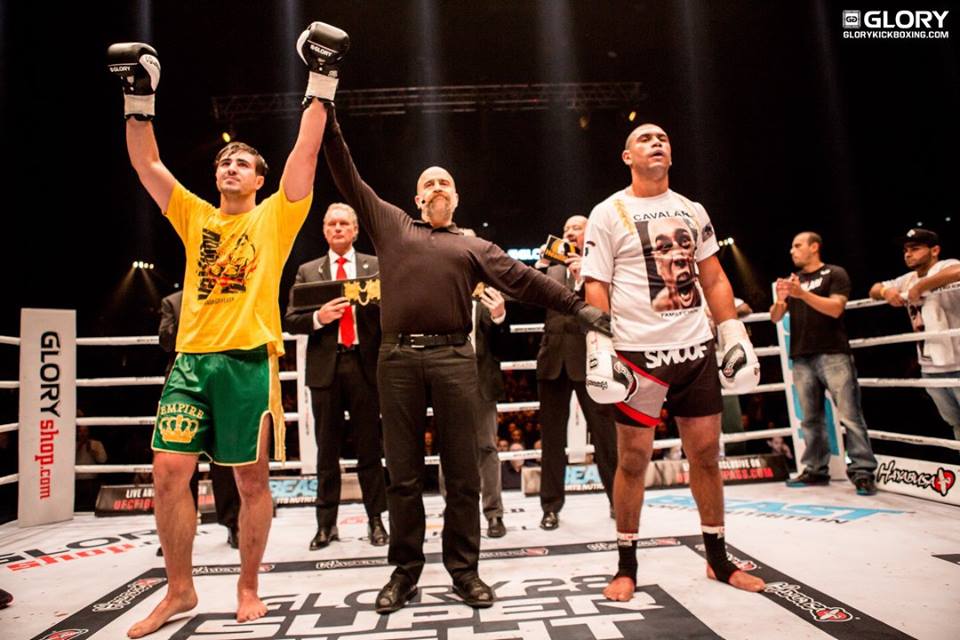 On Friday, Feb. 24, GLORY kickboxing returns to the Windy City for GLORY 38: Chicago.

In the night’s main event, light heavyweight titleholder Artem Vakhitov puts his belt on the line against No. 1 contender and former champion Saulo Cavalari. The pair have met twice previously, with Cavalari edging Vakhitov by split decision at GLORY 20 and Vakhitov outlasting Cavalari at GLORY 28 to capture the title. Since then, Russia’s Vakhitov has defended the belt against Zack Mwekassa, while Brazil’s Cavalari has topped Brian Douwes to set up the rubber match.

Also on the night’s main card, a one-night, four-man light heavyweight contender tournament features the aforementioned Mwekassa against France’s Zinedine Hameur-Lain in one side of the bracket, while Danyo Ilunga looks to bounce back from his “Fight of the Year” battle with Michael Duut when he takes on Brazil’s Ariel Machado on the other side of the bracket.

Light heavyweight champion Artem Vakhitov and former titleholder Saulo Cavalari have already met twice, splitting the two previous match-ups. However, in the second meeting, Vakhitov outclassed Cavalari by a wide margin. Can the Russian repeat that performance and retain his belt, or will Cavalari make adjustments and recapture the title?

Russia’s Vakhitov may only be making the second defense of the GLORY belt, but the rest of the light heavyweight division has to be concerned with how dominant the 25-year-old has looked in his last two appearances in the GLORY ring. First came the lopsided win over Cavalari at GLORY 28 in Paris, where he arguably won every round from the Brazilian. Then came his title unification match-up against Zack Mwekassa at GLORY 35, which was Vakhitov’s most complete performance to date with the promotion. He simply battered Mwekassa, becoming the first to stop the Congo native since, ironically, Cavalari did so at GLORY 18. Vakhitov may have less than two dozen professional contests, but he had nearly 100 amateur bouts and it’s clear he is coming into his own as one of the sport’s best.

Cavalari, meanwhile, has been one of the most successful fighters in the GLORY light heavyweight ranks over the last four years. He’s beaten a who’s who of the top 10, including Vakhitov, Mwekassa (twice), Danyo Ilunga, Mourad Bouzidi and Filip Verlinden. His only losses during that stretch came against knockout artist Tyrone Spong and Vakhitov. The Brazilian bounced back from his loss to the champion with a dominant win over Brian Douwes at GLORY 34 in Denver. Cavalari is one of the few combatants to get a title shot without enduring a contender tournament recently.

The first fight between these two in Dubai was an all-out battle from bell-to-bell. Cavalari’s kicking advantage was apparent throughout, while Vakhitov largely got the better of the exchanges from close quarters. The fight easily could have gone either way. That’s what made the second fight all the more surprising. Vakhitov took control early and pulled away as the fight progressed. His boxing prowess was on full display, and he didn’t let Cavalari control range with his kicks. Based on how Vakhitov performed in the second fight and the way he completely dismantled Mwekassa in his first title defense, he should be expected to once again cruise past Cavalari and retain his title.

This might be the most stacked contender tournament in quite some time.

Mwekassa will step into the ring looking to rebound from a title defeat to Vakhitov. The power-punching Congolese fighter has used his superior boxing to establish himself among the division’s elite, even holding the interim title at one point. His list of knockout victims includes UFC veteran Pat Barry and fellow top-10 fighter Mourad Bouzidi. His pair of losses to Saulo Cavalari and recent defeat against Artem Vakhitov should be motivating factors for him in this tournament.

Ilunga is coming off a “Fight of the Year” classic with Michael Duut at GLORY 36 in Oberhausen, Germany. The extension-round decision defeat actually extended his GLORY losing streak to three in a row, but the veteran has faced a murderer’s row of opponents. He took both Duut and top-10 fighter Zabit Samedov to an extension round, he went the distance with Vakhitov at GLORY 25 in Milan, Italy, and he dropped a split decision to Bouzidi at GLORY 26. Don’t let the losing streak fool you, however, as the Remy Bonjasky protege did capture a four-man tournament in South Africa prior to the Duut fight and is one of the most experienced and complete fighters in the division.

Hameur-Lain’s tournament will begin with revenge on his mind. The Frenchman dropped a decision to Mwekassa at GLORY 29 in Copenhagen, Denmark, last year. He then captured the GLORY 32 contender tournament with wins over Warren Thompson and aforementioned fellow tournament participant Machado. Hameur-Lain’s earned title shot evaporated at GLORY 35 when he was brutally finished by Pavel Zhuravlev.

The tournament’s final combatant is Brazil’s Machado. He put himself on the map by defeating the aforementioned Zhuravlev in his GLORY debut, but fell short against Hameur-Lain in the tournament final. He then dropped down to middleweight at GLORY 34 for another contender tournament, but failed to make the finals after a three-round war with Yousri Belgaroui. He now returns to the light heavyweight division hoping to recapture some of the magic from his win over Zhuravlev.

The match-ups in this tournament are full of intrigue. Based on the pair’s first meeting, it’s likely that Mwekassa again tops Hameur-Lain, although the Frenchman might not make it the full three rounds this time around. Despite his tough stretch inside the GLORY ring, Ilunga’s experience and level of competition should help him to get past Machado. If that holds true, then an all-Congo final will be in order between Mwekassa and Ilunga. Mwekassa’s punching power is a great equalizer in the majority of his fights, but the technique of Ilunga will prove to be too much. Ilunga takes the tournament by decision and sets up an improbable title shot against the main-event winner.