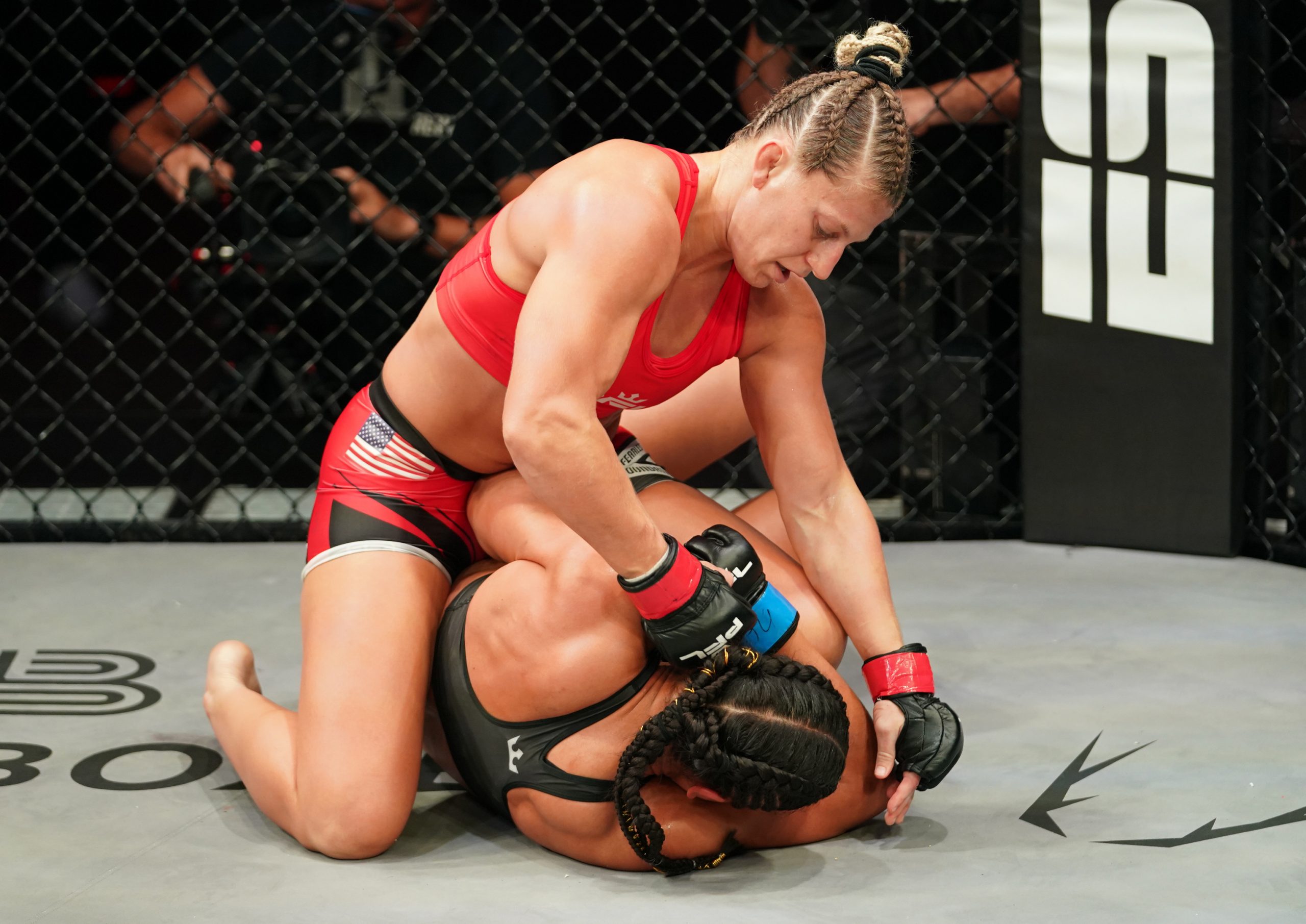 This weekend, both women’s MMA bouts I previewed were similar in that the losing fighter did the opposite of what I said needed to be done. Both fighters had a big reach advantage and on their own, gave that reach advantage away. It ended up costing them. I’ll explain below.

Fabian was fighting an uphill battle as Harrison was a huge favorite. So this result wasn’t exactly a big surprise. In my preview, I wrote how Fabian needed to take the center of the cage, use her reach and try and control the range. She needed to put Harrison on her heels.

Harrison obviously wanted to get the clinch and get the fight to the ground. If Fabian could take the center, use her jab and make Harrison move backwards, she would make any takedown attempts for Harrison much harder. The last thing you want to do against someone like Harrison is put your back to the cage. When you do that, you are basically giving her a shortcut, you are doing half of her job for her.

Right at the start of the fight, Fabian did exactly what she couldn’t afford to do. She started moving backwards and allowed Harrison to come to her. This may have been case of giving Harrison to much respect. I think her main focus was trying to avoid Harrison getting too close to her.

On the surface, that strategy sounds smart. But moving backwards is not the way to do it. You are letting her come forward and you are trapping yourself. Eventually Harrison is going to catch you. It also negated Fabian’s striking, her biggest strength. By moving backwards, you are making it so much harder to strike, and when you do throw, you are not doing so with power.

Try it for yourself. Get in a fighting stance, move forward and throw punches. Did you do it? Okay, good. Now do the same thing, only now do it moving backwards. See the difference? You didn’t do it, did you? That’s okay, you can take my word for it.

Anyway, Fabian was moving backwards right away. It took Harrison very little time to catch her and get her down. From there, it was obvious what was going to happen. Harrison was able to advance position fairly easily. Fabian tried to find an escape but when she did, Harrison moved to a better position. At first Harrison looked for the armbar, but then was able to start landing hard ground and pound. The referee had to step in and save Fabian.

Fabian is a talented fighter. She didn’t give herself the best chance in this one, but she is skilled. This was a good learning experience for her and she will do some big things in this sport.

What is next for Harrison? That is an easy one. She will face Taylor Guardado next in the finals. Guardado took a decision win in her fight against Mariana Morais.

Just like Fabian, Malecki needed to use her reach advantage. She had a huge advantage. I wrote in my preview how she doesn’t use it and allows fighters to get inside with little resistance.

In this fight, Nunes had no trouble getting inside. She was landing hard punches. Multiple times she had Malecki covering up against the cage and it seemed on the verge of being stopped a couple different times. It was really frustrating to watch. Malecki would let her in close and back her to the cage. She would then try push with front kicks… well, kind of.

With Malecki’s length, those kicks could be huge weapons for her if she used them as offensive moves. She could do damage with them. At the same time, she could keep her opponents at a safe distance and pick them apart on the feet. Instead Malecki was using them only when Nunes got really close. They were just feeble attempts to push her away. The problem with that is twofold. First, she shouldn’t have let Nunes get so close to where she would have to do that. Secondly, at that point, Nunes was landing at will and so close that Malecki couldn’t even fully extend her legs. The kicks were completely ineffective.

Late in the round, Nunes was really going to work on her and had Malecki in trouble. Malecki was able to get her back off the cage but as she circled out, she left her hands down. Nunes threw a hard punch that landed perfectly and put Malecki out cold.

It really was that simple. Nunes getting inside and landing almost at will, with Malecki unable to mount any offense.

What is next for Nunes? Let’s give her a test. How about Alexis Davis? Davis has lost four of five but is a veteran with some nice wins on her resume.