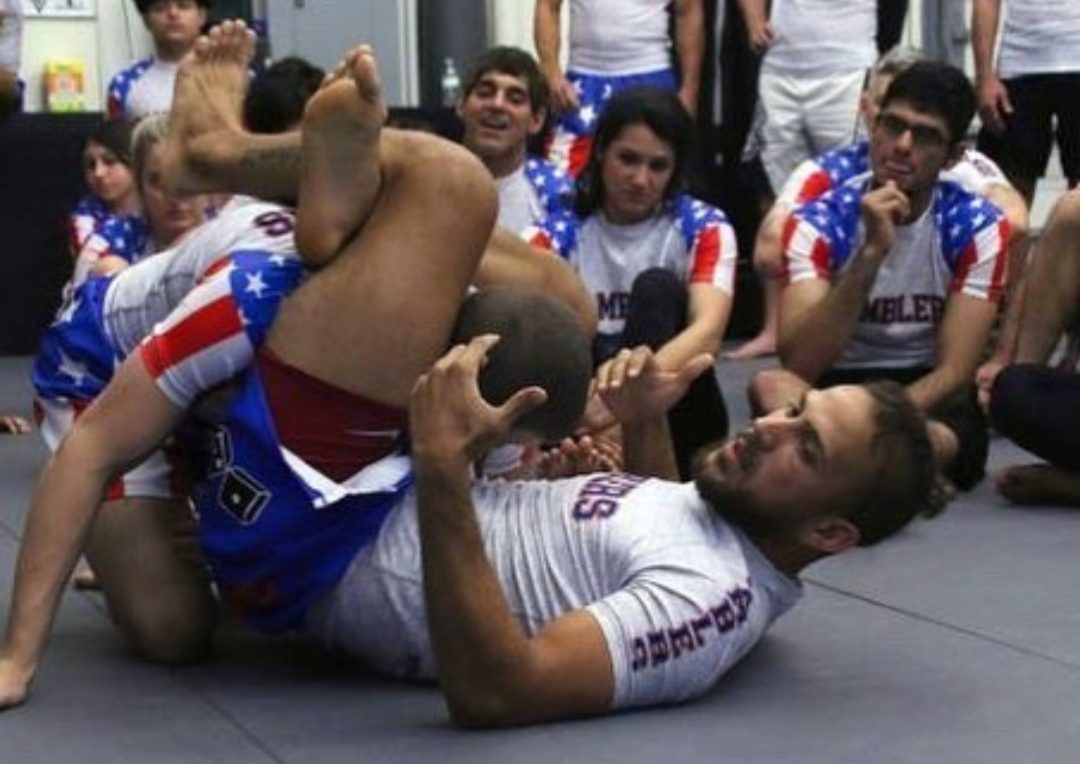 Combate Global’s Eric Alequin: A Hero In and Out of the Cage

What if there was a college dropout and MMA fighter from South Florida who is a crime fighter and not a criminal? Most mainstream people would either not believe the story of Eric Alequin.

MMA fighters, in general, get a bad rap. While most of them are healthy athletes who live a good life, there is a stigma that goes with the profession. There are stories of a small handful of fighters who get in trouble, have addiction problems or are just plain assholes. But there are many more stories of good-guy athletes who will go above and beyond to help people.

On July 17, Alequin and his wife, and also BJJ black belt, Amanda “Tubby” Alequin witnessed a car accident. A man hit a car with a family in it and fled the scene on foot.

“I go check on them,” the Brazilian Jiu-Jitsu black belt Alequin told Combat Press. “I saw there was a little kid in the car who was visibly shaken up – she was crying – and that grinded my gears a little bit. So, my wife walks up, and I looked at her and said, ‘babe, should I go get him?’ And, she gave me the word, ‘go get him.’ Next thing you know, 10 blocks later, I catch up to him. He gassed out in a park. He could barely even move anymore. I called my wife and told her to direct the cops to where I was, and they snatched him up right from there.”

Now, Alequin is not out to brag on his catching of the bad guy, and it didn’t even make the news. However, the man has a heart as big as gold, and he shows that in everything he does.

Alequin is originally from Lake Worth, Fla. But when he was young, his mom moved her family to Palm Beach Gardens for a better life. He eventually wanted to play college football. But some bad grades caught up to him sending him to community college.

“College wasn’t for me, man,” said Alequin. “One of my buddies was like, ‘what about this UFC stuff?’ So, I was like, ‘well, let’s go check out a gym.’ I checked out this place called Xtreme Couture. I sat there for an hour and no one said anything to me. So, I went to another gym called Team Nogueira, and when I walked in, the instructor came right up to me. He said, ‘hey, take off your shoes and try the class out.’ Literally, from that date, within two weeks, I was not going back to college.”

Alequin decided to dedicate his life to fighting back in late 2008. It was a transformational time for him as an 18-year-old kid, but he did things right from the beginning.

“I was originally going to go right into MMA, but my instructor was like, ‘look, anyone can knock anyone out with these small gloves,” explained Alequin. “’What separates you is having great jiu-jitsu.’ At the end of the day, a white belt is not going to submit a black belt, but anybody can land a lucky punch. So, he wanted me to compete a lot in jiu-jitsu and then focus on MMA. I was working on my striking too, but I was only competing in jiu-jitsu.”

It was through jiu-jitsu that Alequin eventually met his wife. They met over 10 years ago at a familiar venue.

“I saw her at a jiu-jitsu competition in Palm Beach Gardens,” said Alequin. “Eventually, we went back through our old tournament videos and we were at all the same tournaments. We just didn’t see each other. We didn’t know each other.

“She’s actually more credentialed in jiu-jitsu than me. She’s a multiple-time world champion at black belt. I think she actually started boxing. One day her brother came home and was like, ‘I’m going to put this move on you and you can’t get out.’ Her brother put her in a kimura and she couldn’t get out. The next day, she was in jiu-jitsu class.”

Alequin now trains primarily at Gamblers Jiu-Jitsu & Kickboxing. In addition to his grappling accolades, he now sits at 4-0 as a pro fighter, after enjoying a 3-0 amateur career. He largely attributes his success to the patient path he has followed.

“I think early in my life, a lot of people were rushing me to fight while I was young,” Alequin said. “Now I sit back and realize I’ve gone through all of the perfect things in my life to be where I’m at now. I feel like I know more than I would have known when I was younger. I’ve had multiple people mentor me that have helped me in great ways. I’m 31 right now. I have zero injuries. I have not been hit in the head a lot, thankfully. So, I in a very good spot, and I feel like I’m pretty much peaking at this moment.”

Alequin’s last fight was against Charlie Decca at Combate Global in April. He picked up the unanimous-decision win in a battle that didn’t go exactly as he had expected.

“I thought it was great – a couple technical errors on the ground,” Alequin admitted. “I wasn’t used to someone grabbing onto my gloves. That was a little new for me. He was trying to stall.”

Tonight, live on Paramount+, Alequin is back in action again for Combate Global. He faces Mexico’s Daniel Sanchez in the co-main event.

“I know the guy’s name, but I cannot find anything about him,” Alequin said. “I know he has a pro boxing record. I’m assuming that his grappling isn’t world class. I’m looking to expose that.”

Sanchez is 2-0 as an MMA fighter. He stopped his first opponent with a submission and his second one by strikes. Both in the first round. He holds a 6-5-1 pro boxing record as well, but Alequin is not too concerned. He knows he can win anywhere the fight goes.

A few weeks ago, Alequin chased down a bad guy after a track workout with his boxing team. That’s not exactly what they mean by “active recovery.” Tonight, he is back in the cage showcasing his skills. His eyes are set on a dream that shows just how big his heart really is.

“Man, I want to be a champion at the highest level,” Alequin said. “The end goal – the reason that I’m fighting – is to one day tell my mom, ‘You don’t have to go to work tomorrow.’ That’s why I’m doing what I’m doing.”