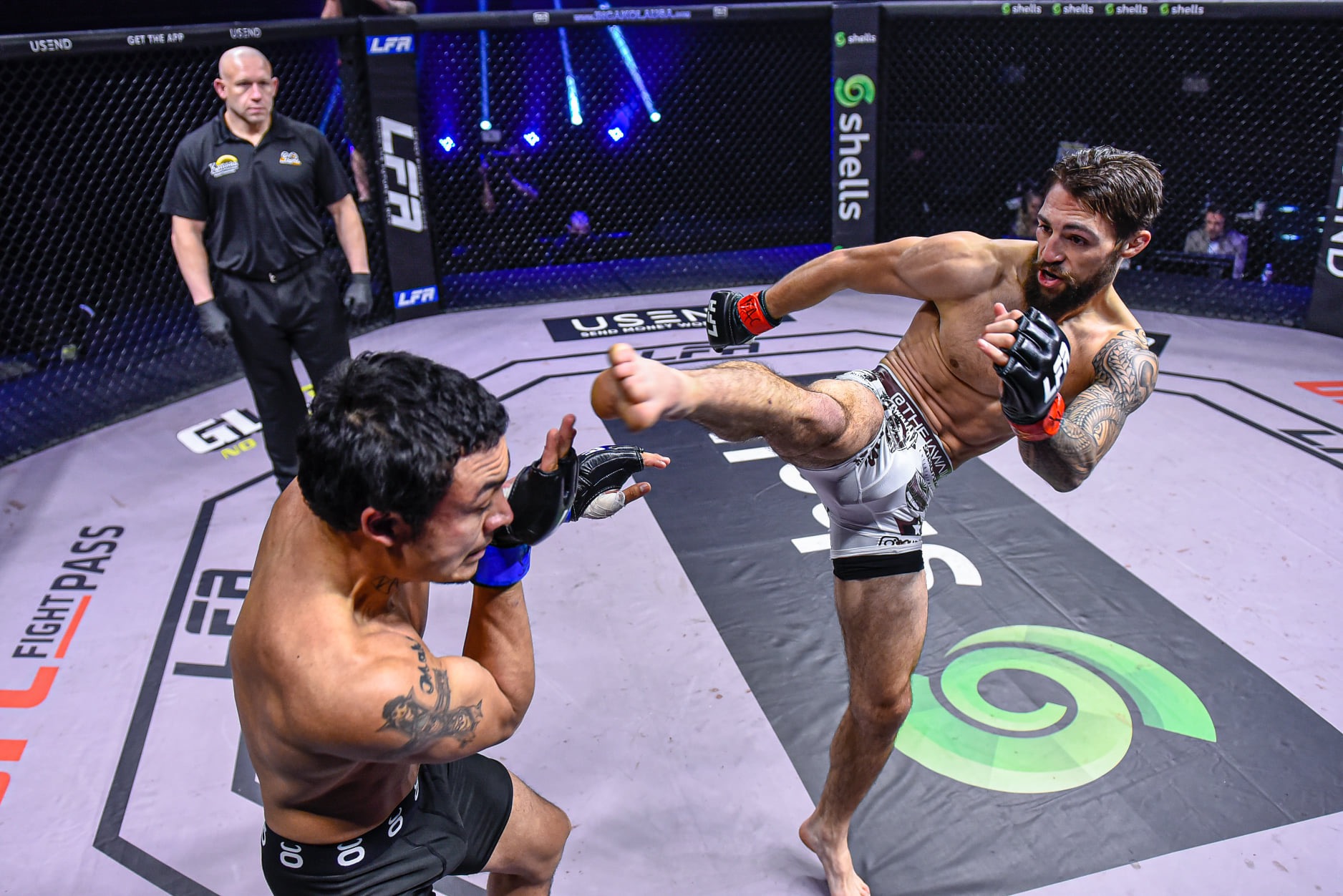 LFA 107’s Kamuela ‘The Jawaiian’ Kirk: A Chance to Impress

What do you get when you cross a Jamaican and a Hawaiian? Just ask Legacy Fighting Alliance featherweight Kamuela Kirk.

“I was born in Hawaii,” Kirk told Combat Press. “My dad was raised there. You know, [he] met my mom, and they had my sister and I. My mom’s side of the family is actually Jamaican. So, a Hawaiian-Jamaican crossover would be Jawaiian. We were listening to the radio in Hawaii, and there’s a genre of music called Jawaiian music. It’s basically Hawaiian music with some Jamaican influence to it. They were talking about Jawaiian music on the radio, and my dad was like, ‘Hey, you guys are Jawaiian.’ It was just something that kind of stuck: Jawaiian boy.”

Kirk’s family moved from his native Hawaii to Seattle when he and his sister were very young. This was where Kirk got his first exposure to martial arts.

“I was raised around the sport,” Kirk explained. “I first started training when I was four years old. I didn’t do it straight through from when I was four, but I was introduced when I was four. I kind of did it on and off as a kid growing up. It wasn’t until I was about 14 or so when I knew I wanted to be a professional MMA fighter.

“I was introduced to it when I was four, because of my dad and my uncle. They saw UFC 1, and they had been watching MMA and the UFC, literally, since the first UFC ever. They saw this little Brazilian dude, Royce Gracie, tapping everybody out with jiu-jitsu. My dad was like, ‘I want to learn that, and I want my son to learn that.’ So, he got me into some jiu-jitsu classes, we found a local gym, and the rest is history.”

His dad had moved to Seattle in order to go to college, but the weather in the Pacific Northwest left a lot to be desired. So, in 1999, the family moved again, this time to Arizona.

When Kirk first started training in Brazilian Jiu-Jitsu, it was under the tutelage of black belts Juliano Prado and Giva Santana, both of whom were also accomplished MMA fighters. The Kirk family lived on the west side of Phoenix, but they would head to the city’s east side to train with Mackenzie Dern and her dad, Wellington “Megaton” Dias. It was a long drive, so in 2007, the Kirks decided to bring their training closer to home.

“At the time, MMA was nowhere near as popular as it is now,” Kirk said. “There were only a handful of gyms in Arizona, and most of them were out east. So my dad wanted to open up a gym out west so people on that side of town had a spot to train at. So, we did. We ended up hooking up with the first instructors I started with, Juliano Prado and Giva Santana.”

Kirk made his amateur MMA debut a decade ago on May 13, 2011. His professional debut followed in early 2014. He is now 10-4 as a pro. It’s been seven years of training hard and finishing opponents, but the road has had a few bumps along the way.

“There are some things that I look back on and mistakes I have made being a young fighter — not in my personal life, because I’ve dedicated my life to this sport, but career-wise,” Kirk explained. “I’ve taken fights when I was injured or taken fights on short notice when I had staph infection.”

“That was dumb,” Kirk added. “The way that I used to cut weight and the way that I used to reload — things like that I look back on and just wish I would have known what I knew now, then. It would have made things a lot easier. But, as far as where I’m at, I’m happy. I’ve got 10 wins now, 10 finishes, and nine in the first round — against good guys, too.”

Those guys include longtime veteran Kevin Croom, whom Kirk finished in late 2018. The win was enough to earn him a spot on Dana White’s Contender Series in July of the following year. Unfortunately, Kirk suffered a third-round TKO against Billy Quarantillo in his appearance in front of White and company. He was then handed a split-decision loss by Bruno Souza at LFA 84. It’s the only time in his career that he has lost back-to-back bouts.

“The first loss, man, believe it or not, it was actually one of the fights that I’m most proud of,” Kirk admitted. “I probably could have done things a little more intelligently [for that fight].”

“About five weeks before that fight, I tore the cartilage in one of my left ribs,” Kirk explained. “Over the course of the five weeks, the rib had healed up a little bit. When you tear rib cartilage, it takes up to three months for that to heal. We knew it was going to be a gamble going in. We definitely didn’t want to take a shot to the ribs. I went out there and dominated the first round, but with 20 seconds left or so in that round, I ended up taking a pretty hard kick to the ribs. That kind of shut me down for the rest of the fight.

The Souza loss was a much tougher pill to swallow. It really could have gone either way, but Kirk was confident he was victorious right up until the decision was read.

In January, Kirk was back in the LFA cage opposite Guilherme Santos. He won that one handily, adding another first-round TKO to his record.

“I’m pretty mentally strong,” said the Jawaiian. “As frustrated as I was about losing a split decision I thought I won, I had to put that behind me and refocus [and] have confidence in my preparation and my teammates and myself. I was coming off two losses, and it sucked, but it wasn’t the end. It’s on to the next one. My last performance was arguably my greatest performance out of all of them.”

Less than two weeks ago, the LFA again tapped Kirk. This time, it was for a main-event battle against fellow promotional veteran Daniel Swain. Swain, who fights out of Spokane, Wash., is also a finisher, but he’s coming off of a loss to T.J. Laramie in an August appearance on the Contender Series.

“He’s a tough guy,” said Kirk. “He’s got twice as much experience as I do. I’m not fazed by that at all, but he’s been in there a long time with good guys. I respect him, but I’m confident everywhere. I believe I’m the better striker. I believe that I have better jiu-jitsu. He hasn’t gone the distance in I don’t know how many years — six, seven years or something. He either gets finished or he gets hurt, or he ends up submitting somebody. He’s not knocking people out. He’s submitting people.

“I believe I’m not going to get submitted. I’m the better grappler.”

The short-notice aspect of this fight does not bother Kirk one bit. He still coaches and trains at his family’s gym, Siege MMA. He has dedicated his life to the gym and the sport. He’s ready to go three rounds anytime.

“I’d like to fight another two more times after this one, which would be four times this year,” Kirk said. “My goal is to get into the UFC, and the UFC just so happens to be coming to Arizona one month after this fight. [On] June 12, they are going to be here in Arizona. I want to win this fight in spectacular fashion and then they are going to be at a venue that is only a 10-minute drive from my gym. I want to win this fight, get on that card, and then to be able to fight in front of my family and friends and teammates. [That] would be amazing.”

Kirk, who earned his black belt in BJJ two years ago, has come a long way since his family’s arrival in Arizona. He’s still young, hungry and ready for the next stage of his career, though. On Friday night, he takes to the cage live on UFC Fight Pass for the main event of LFA 107. It’s his chance to put on a show for the UFC brass and punch his ticket to the big stage.