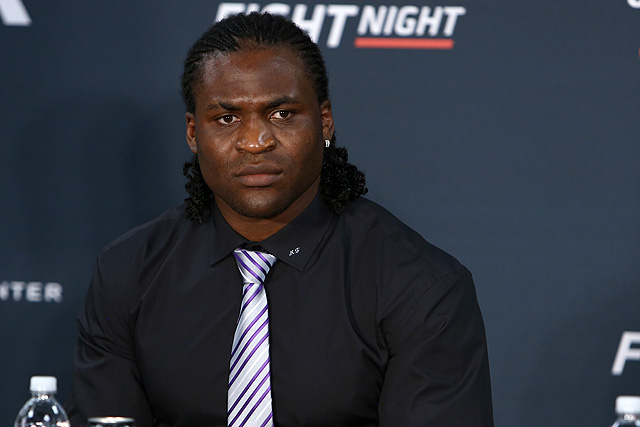 UFC 260 featured the long-awaited rematch between Stipe Miocic and Francis Ngannou. Unlike the first fight, the Cameroon native Ngannou was able to hurt the champion with punches and eventually put him away with a violent knockout in round two. Ngannou not only claims the belt, but also the top spot in the rankings.

The main event of UFC 259 was set up to be a showcase for middleweight champion Israel Adesanya, but Polish titleholder Jan Błachowicz had other plans. The champion outworked Adesanya over five rounds to retain his belt and spoil the Nigerian fighter’s hopes of becoming a two-division champion. On the same card, Aleksandar Rakić bested former title challenger Thiago Santos by decision. Rakić climbs to fifth with the victory, while Santos drops all the way to ninth with the loss.

Dropped from the rankings: Gegard Mousasi (10)

UFC champion Israel Adesanya was in action at UFC 259, but it was at light heavyweight and does not impact the middleweight rankings. However, the main event of UFC Fight Night: Brunson vs. Holland did shuffle the bottom of the top 10. Derek Brunson dominated Kevin Holland and therefore supplants Bellator MMA’s Gegard Mousasi for the 10th spot.

The month of March had a major impact on the welterweight rankings. In the UFC Fight Night: Edwards vs. Muhammad headliner, England’s Leon Edwards returned to action, which makes him eligible for the rankings once again. However, his fight with Belal Muhammad was ruled a no-contest after an accidental eye poke. Edwards re-enters the rankings in sixth. At UFC 260, Brazil’s Vicente Luque made former champion Tyron Woodley look like a shell of himself en route to a first-round submission victory. Luque vaults into seventh with the win, with Woodley sliding all the way to 10th. The inclusion of Edwards and Luque pushes Nate Diaz, Anthony Pettis and Demian Maia out of the top 10.

Dropped from the rankings: Khabib Nurmagomedov (1)

No fighters in the top 10 were in action during the past month, but the retirement of UFC champion Khabib Nurmagomedov is now entering its sixth month. This leads to his removal from the rankings. Paul Felder re-enters the top 10 as a result.

Much like the UFC 259 co-main event, this month’s rankings won’t be without controversy. Champion Petr Yan landed an illegal knee in the fourth round of his title defense against Aljamain Sterling, and Sterling was unable to continue. Since the foul was ruled intentional, Sterling became the first fighter to win a UFC belt after his opponent was disqualified. Prior to the foul, Yan was ahead on the scorecards and appeared headed to victory. As such, Yan maintains his spot atop the rankings, despite Sterling holding the belt. The pair’s inevitable rematch should help sort out this mess.

Dropped from the rankings: Rogério Bontorin (10)

As with many of the other divisions, UFC 259 had a significant impact on the flyweight top 10. Askar Askarov continued his ascent up the rankings with a dominant win over former title challenger Joseph Benavidez. Askarov rises all the way to third with the victory. On the same card, ninth-ranked Kai Kara-France dispatched Brazilian Rogério Bontorin by TKO in the first round. This opens the door for ONE Championship titleholder Joshua Pacio to move ahead of Bontorin and claim the No. 10 spot in the rankings.

Dropped from the rankings: Akhmednabi Magomedov (7)

No fighters in the top 10 were in action during the past month, but seventh-ranked Akhmednabi Magomedov has not competed in the past 18 months and therefore falls from the rankings. Taking his place is Ryosuke Noda, who will look for his second win over Toshiya Takashima in May at Pancrase 321.

March put the pound-for-pound rankings in a blender. The retirement of Khabib Nurmagomedov and the UFC 260 defeat of Stipe Miocic created two openings in the top 10. Additionally, UFC 259 saw UFC women’s featherweight and bantamweight champion Amanda Nunes continue her dominance with a submission of former Invicta FC titleholder Megan Anderson. Nunes takes over the No. 1 spot as the best fighter on the planet. Light-heavyweight champion Jan Błachowicz enters the top 10 for the first time, taking the sixth spot from Israel Adesanya, the man he defeated at UFC 259. Finally, UFC strawweight queen Weili Zhang also finds herself in rankings after all the shuffling. Zhang captures eighth place.