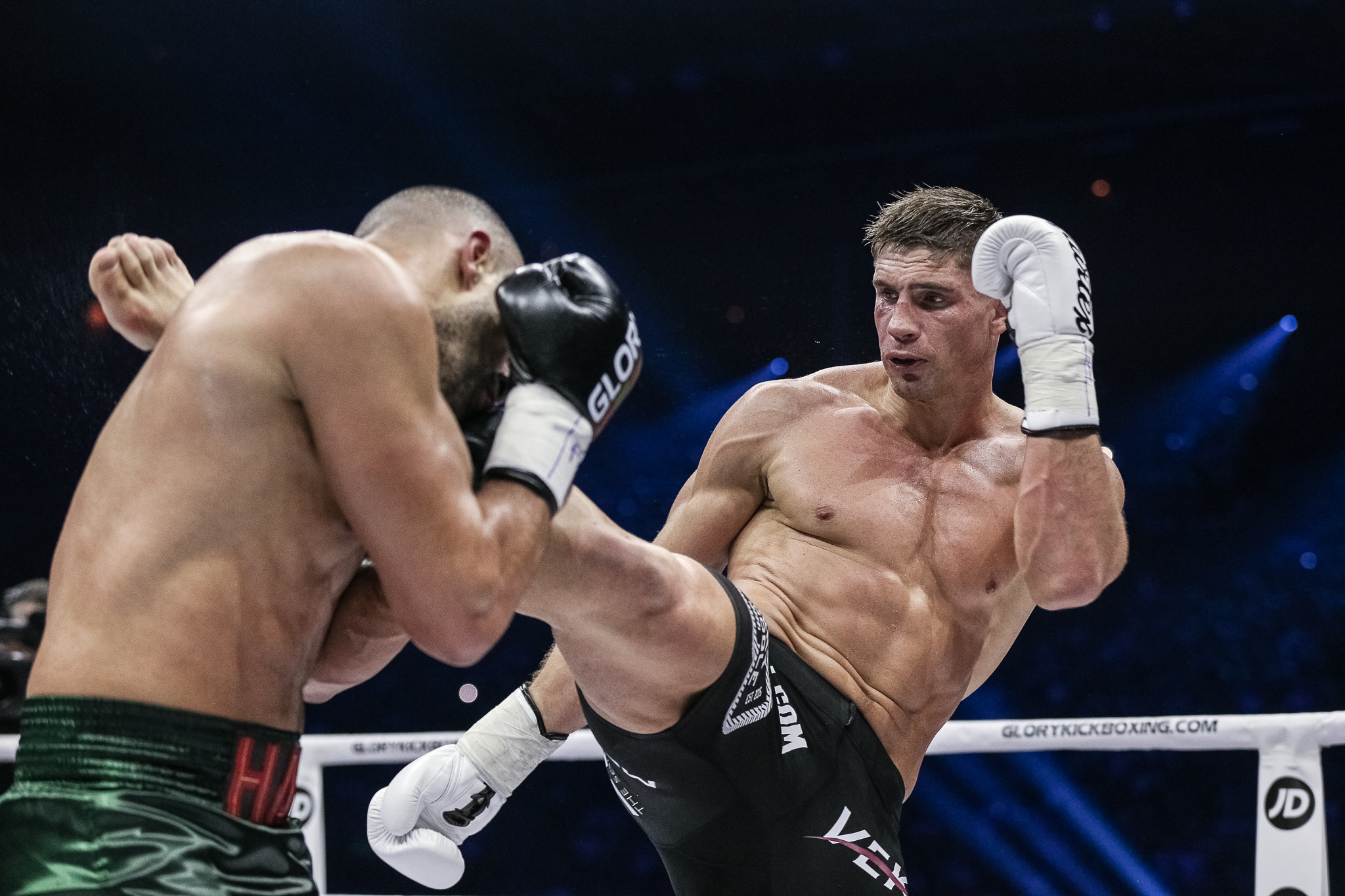 GLORY Kickboxing will host its first event of 2021, GLORY 77, from the Rotterdam Ahoy in the Netherlands on Saturday, Jan. 30.

In addition to the tournament, belts will be on the line in the light-heavyweight, welterweight, and women’s super-bantamweight divisions.

The action kicks off live with a preliminary card stream at 1 p.m. ET. The night’s main card follows, live on pay-per-view, at 2 p.m. ET.

This card features three title fights. Which of these contests will be the most competitive?

After a lackluster 2020 thanks to not only the coronavirus (COVID-19) pandemic, but also due to a bankruptcy and change in ownership, GLORY is coming out swinging for its first event of the new year. Let’s just hope this is a sign of things to come and not a swan song after numerous champions jumped ship to other promotions over the last few months.

It’s a true challenge to pick which of these title fights will be the most competitive, because it depends on a number of factors. The biggest, of course, is the access to quality training during the global pandemic. For the sake of kickboxing fans, let’s assume that the former champ Groenhart comes into his title challenge healthy and motivated. In that case, his bout with Doumbé could be the most competitive and entertaining.

The match-up marks the third meeting between the French titleholder and the Dutch veteran. They first collided at GLORY 28 in 2016 in a fight where Doumbé took a decision in his home country. The rematch came roughly 18 months later in Chicago, where Groenhart dethroned Doumbé after a contentious split decision from the judges.

Doumbé battled hard and reclaimed the belt at GLORY 64 after Groenhart was unable to retain it against Harut Grigorian. The Frenchman has reeled off six straight wins leading into this title defense, and five of those victories came via knockout. The 28-year-old is in the best form of his career, which could spell trouble for the challenger.

Groenhart has been amongst the welterweight elite for more than a decade. However, his resume is plagued with inconsistency and questions about his focus. When he is on his game, he can beat anyone in the world. When he’s off, he appears disinterested and struggles to showcase his explosive arsenal of flying knees and power strikes.

The most intriguing part of this fight is whether either of these men can stop the other. In the eight rounds they have shared together in the GLORY ring to date, neither fighter has been able to deliver a finish. With a combined 82 knockouts between them, can one of them put an emphatic end to this trilogy?

Based on recent performances and their career trajectories, it is Doumbé who is the most likely to put an exclamation point on this rivalry. Groenhart will keep the fight close in the opening rounds with his well-placed knees and veteran savvy, but Doumbé’s punching power and accuracy will be the difference as the fight ventures into the later rounds. Look for a late-round stoppage in which Doumbé retains his belt.

Which of the title fights will be the least competitive?

The least competitive match-up of the title tripleheader will be the super-bantamweight bout between van Soest and Aline Pereira. This is based on three things: experience, level of competition, and the stylistic match-up.

The Brazilian Pereira is entering just her seventh pro fight on Saturday. It will mark her third appearance in the GLORY ring, where she has defeated Chommanee Sor Taehiran and Crystal Lawson. While Chommanee is well known for her Muay Thai experience, Lawson was a relative unknown. So, it was no surprise to see Pereira batter her. Pereira is an aggressive power-puncher who is constantly looking for a finish. That head-hunting approach will likely work against her, however, when she squares off with van Soest.

The American van Soest reclaimed GLORY gold at GLORY 71 in late 2019. She was the promotion’s inaugural titleholder, but she lost the belt to consensus No. 1 fighter Anissa Meksen and failed to earn it back in the pair’s rematch two years later. However, the pair’s third encounter was an elite performance by van Soest, who was able to convince the judges to award her the belt. Van Soest is a technical fighter who has fought many of the world’s best, including Denise Kielholtz, Sofia Olofsson and Amel Dehby, in addition to Meksen.

Van Soest’s style is a perfect counter to the style of Pereira. The American’s speed and movement will make it difficult for her Brazilian counterpart to land power strikes. Van Soest uses combinations well to get in and out of the pocket, and she is great at avoiding damage. The only thing that is missing from her repertoire is the ability to end fights: She’s only found one finish in the past five years.

This all adds up to a recipe for a five-round master class from van Soest on Saturday night. She’ll frustrate Pereira with her footwork and speed, while also delivering consistent combos. Don’t expect a finish, but the judges should have an easy task in tallying their scores for van Soest.

Will any titles change hands on Saturday?

Based on the two prior responses, it should be apparent which belt will have a new owner after this event. The light-heavyweight strap will end up around the waist of Alex Pereira, who as a result will become the simultaneous middleweight and light-heavyweight champion.

The current titleholder Vakhitov is a tremendous boxer with a rock-solid chin, which is why he’s held the belt for nearly five years. However, the last few years must have been frustrating for the Russian. He has battled numerous injuries to his hands and has fought just twice since 2017. In both of those contests, he was fortunate to leave the ring with his crown. At GLORY 56 in Denver, Vakhitov arguably lost to Danyo Ilunga, but he was the recipient of favorable judges’ scorecards. Then, at GLORY 66, he again appeared to lose, this time to Dongi Abena, only to retain when the decision was announced.

Pereira, meanwhile, has been searching the globe for a challenge. He’s competed in both MMA and kickboxing, and he hasn’t tasted defeat since 2017. He enters this light-heavyweight title unification bout after having won eight straight in the ring, with six coming by knockout. After essentially cleaning out the middleweight ranks, he moved up in weight to take on the aforementioned Abena for the interim light-heavyweight belt and dispatched of the Surinamese fighter with a vicious left hook.

This fight comes down to a battle of technique versus power. In some cases, like with van Soest and Aline, technique combined with experience will give the edge to the more polished striker. However, if there’s anything that can be learned from Alex’s career to date, it’s that his power is the great equalizer. He was being thoroughly outclassed by current UFC champion Israel Adesanya at Glory of Heroes 7 before he connected with his patented left hook and put Adesanya out. Vakhitov might win a couple of rounds thanks to his superior technique, but Pereira will eventually find a big shot and hurt the Russian. Once Alex smells blood, there’s not a better finisher in kickboxing. Pereira becomes a two-division champion with a violent knockout.

Heavyweight champion Rico Verhoeven was also supposed to defend his belt on this card, but a late injury to Jamal Ben Saddik forced the promotion to throw together a last-minute tournament. Can anyone in this bracket defeat the reigning champ?

GLORY has struggled to find worthy challengers for Verhoeven for some time now. The Dutchman has tasted defeat just once since 2013, and it didn’t come in the GLORY ring. He has largely dominated every man that has been put in front of him during his lengthy title reign, including Ben Saddik, whom he stopped at GLORY 49. However, while his resume includes two victories over Badr Hari, Verhoeven showed chinks in his armor in both fights, especially their most recent bout at the end of 2019.

That said, a short-notice tournament probably isn’t the ideal scenario for someone to upset Verhoeven. His opening-round opponent, Hesdy Gerges, has already lost to Verhoeven twice. While the pair’s first meeting was closely contested, the second fight was less competitive. While Gerges has the experience of fighting many of the division’s best, his most successful years have passed. In fact, he’s lost five of his last six bouts under the GLORY banner and only recently got back in the win column late last year in a fight with Enfusion. Gerges will be overmatched by the more athletic Verhoeven.

The other half of the bracket provides some fresh blood to what some have called a “stagnant” heavyweight division. Morocco’s Tarik Khbabez debuts with the promotion after a recent run with ONE Championship. The 25-year-old Levi Rigters already picked up a win at GLORY 76 in December and may represent the future of the division. Rigters will possess a significant height, reach and weight edge over Khbabez in their semifinal clash. He’ll keep his perfect record intact by working the body en route to punching his ticket to the final against his fellow countryman.

While Rigters might be the future of the division, it’s too early in his career for him to truly mount a threat to Verhoeven. Verhoeven will instead overwhelm his younger foe with big combinations along the ropes to hand Rigters his first loss and claim the tournament victory.

Lost in the aura of the three title fights and the heavyweight tournament is a light-heavyweight bout that could determine the next No. 1 contender. The fight pits Luis Tavares against Dongi Abena. The pair met in 2018, with Abena taking a decision after an extension round. Holland’s Tavares has won four of his last five outings and could propel himself into a title fight against the winner of the Vakhitov-Pereira title bout. Abena will look to edge Tavares again and hope for a chance at revenge against either of the two more recent men to defeat him. This should be a close bout from start to finish, with Tavares doing just enough to even the score.