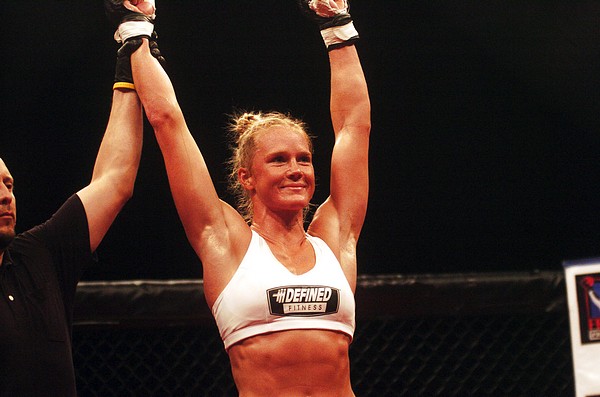 UFC on ESPN 16 provided us with three very interesting and exciting fights and left us with some intrigue involving the bantamweight title picture and who will be next for current champion Amanda Nunes. Let’s get into the fights.

I could write and describe a round in this fight, but no one would know which round I was specifically referring to because each of the five rounds was exactly the same. I thought going in that Holm might look to work the clinch and stay away from a brawl with Aldana. I was partially right. She did make it a point to not get into a brawl, but instead of the clinch game, she kept moving and circling, landing her strikes, and then back to moving. It was a strategy that worked perfectly, as Holm topped Aldana via unanimous decision.

From the second round on, Aldana either looked frustrated or confused. She was unable to make adjustments or go to a plan B. In the third round, she began to finally start cutting the cage off as opposed to chasing and managed to land some shots, but then Holm got the takedown — something she impressively did in each round — and got mount, where she did more damage to end Aldana’s mini rally. Even late in the fight, when she clearly had the fight in the bag, Holm did not let up, take a breather, or coast. Instead, Holm stayed right on track with the game plan.

Aldana showed the toughness she is known for and can learn from this loss. One thing I suspect will be worked on is cutting the cage as opposed to following. Cutting off the cage limits how far your opponent can move. Think of it as cornering a mouse you are trying to catch in your house. When you follow the fighter, they have free range and can continue to move in whichever direction they choose.

I have no problem saying this is the best Holm has looked probably since her victory over Ronda Rousey. Anyone suggesting she was at the end of the line were clearly wrong.

What’s next for Holm? Let’s discuss this after I talk about the next fight.

Round one was a great one for de Randamie. She kept at a distance where Peña couldn’t get in for the takedown and landed punches that seemed to hurt Peña. When Peña did get close enough to clinch, de Randamie was able to avoid the takedowns and showed a clear strength advantage. While the striking difference was clear, Peña, to her credit, came forward. She’d get hit and hurt, but she showed great resolve and kept trying.

Round two was an entirely different story. After some initial strikes by de Randamie, Peña was successful in getting it to the ground and then took over. Peña landed shots from guard to both the head and body. While de Randamie threw a couple punches off her back, mostly she was looking to survive. One thing de Randamie did well was, as Peña tried to pass, she kept one leg trapped, which may have saved her. In fact, before the round ended, de Randamie was able to get herself into a dominant position.

Going into round three, it was one round apiece. You’d expect each woman to continue with what they wanted — Peña with the ground and de Randamie standing. Initially, de Randamie got what she wanted, although Peña did land a couple good ones of her own. However, Peña did eventually get what she wanted. The fight went to the ground, but de Randamie was able to get a guillotine. De Randamie refused to let go of the neck and, incredibly, the striker put the grappler to sleep to get the win.

What’s next for de Randamie? So, essentially, last night was an audition between four top bantamweights to see who was next for Nunes. Holm and de Randamie came out with wins, but who made a better case? Everyone has their own opinions. If I was pressed, I’d probably say Holm. However, the best way to decide is to have Holm and de Randamie face each other for a second time, with the next shot simply going to the winner. Seems fair to me.

I was so excited for this bout that featured former Invicta FC atomweights. The expectation was that it would be 15 minutes of fast-paced hard striking. That’s what we got, especially from Lookboonmee.

In the first minute or two of round one, both ladies were looking really good. After that, Lookboonmee took over the round using her incredible Muay Thai to land hard shots in the cage. The punches and elbows were definitely hurting Frey. In addition, when there was separation, Lookboonmee landed some beatiful kicks to the leg and body. Frey did land an occasional hard punch of her own, but she had trouble keeping the pace with Lookboonmee.

Round two was more of the same, if not more one-sided in Lookboonmee’s favor. Frey tried to keep up with her and also looked for takedowns, but her problem was that to get the takedown she needed to force a clinch first. When that happened, Lookboonmee really went to town with her hands and elbows.

Knowing she needed a big third round, Frey did get the takedown. Knowing this was her chance, she did what she could to look for a finish and even got Lookooonmee’s back. However, Lookboonmee was able to find an escape and got the fight back to the feet. From there, it was more of the same, with Lookboonmee landing with every part of the body that she could use to strike with. Lookboonmee walked away with the easy decision and showed she can be a force in this strawweight division.

What’s next for Lookboonmee? Lookboonmee can strike with anyone, but her ground game still needs work. There’s no doubt she’ll get there, but she’s going to be a small strawweight. Against good grapplers who are bigger than her, this can cause problems. I think a good one might be Cory McKenna. Yes, McKenna has a fight with Kay Hansen coming in November, but, win or lose, she’d be a fitting next step for Lookboonmee.