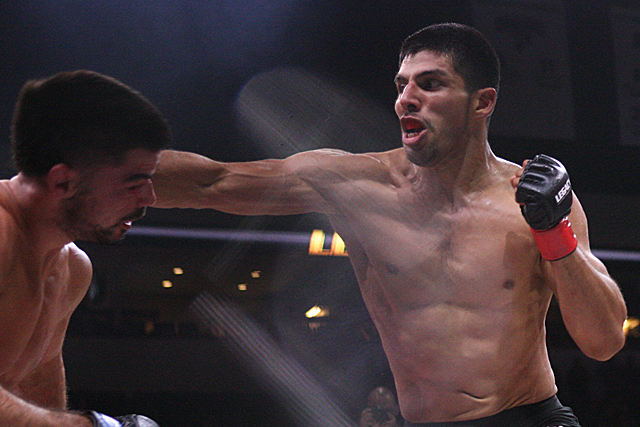 The show’s third episode of the new season takes place on August 11. The ESPN+ stream gets underway at 8 p.m. ET.

He may be only 24 years old, but Dixon has been in combat sports for a long time. He is a great striker and athlete who has looked impressive thus far in his career. He has fast hands and knockout power. Dixon has taken on experienced fighters since early in his pro career, which has amounted to quality cage time. Here, he takes on Orion Cosce, who will engage him on the feet and play right into Dixon’s hands.

Both Cosce brothers bring the fight, but Louis’s fight with Reyna is going to be a fantastic display of violence. These guys don’t like to step backwards and only know how to bite down on their mouth piece and throw haymakers. Both men have pretty good power in their hands as well, so there is a possibility that this contest could end in a knockout. Fans should be sure to tune in for this episode’s main event.

The Dark Horse: The Cosce brothers

Orion and Louis are both undefeated to this point in their careers and could be diamonds in the rough. They are tough kids who are well rounded, with solid striking and grappling. They haven’t faced complete cans in their pro careers, though they certainly haven’t been taking on world-beaters either. Both brothers are aggressive and like to finish fights, qualities that will benefit them greatly in convincing the UFC president when it comes time to hand out contracts.

She has the same record as her opponent, Buys, but her strength of schedule has been questionable. She lost in her pro debut to Linsey Williams, who was just 1-2, but has since gone on to win four fights. The combined records of her opponents in those four wins was just 6-13. That’s not the type of experience that generates much confidence in a fighter. Rose has a lot to prove here.

Syler missed out on a contract last year when he missed weight for a Contender Series appearance. If he scores a win again this season — and assuming he makes weight — Syler will get inked. It will be sweet redemption after he was forced to drop out of episode one of this season due to a positive COVID-19 test.

Buys will defeat Rose and do so impressively enough to gain the attention of the UFC brass.

Dixon is an undefeated prospect with a fan-friendly style. He’s been ready for a UFC shot for a while, and he should get it here with a fun win over Orion Cosce.

Parisian will get another big win on the Contender Series, but this time it will be rewarded with a UFC contract rather than a spot on The Ultimate Fighter. The UFC needs depth in its heavyweight division, and even though Parisian will struggle on the main roster, he has a style that will get him signed.