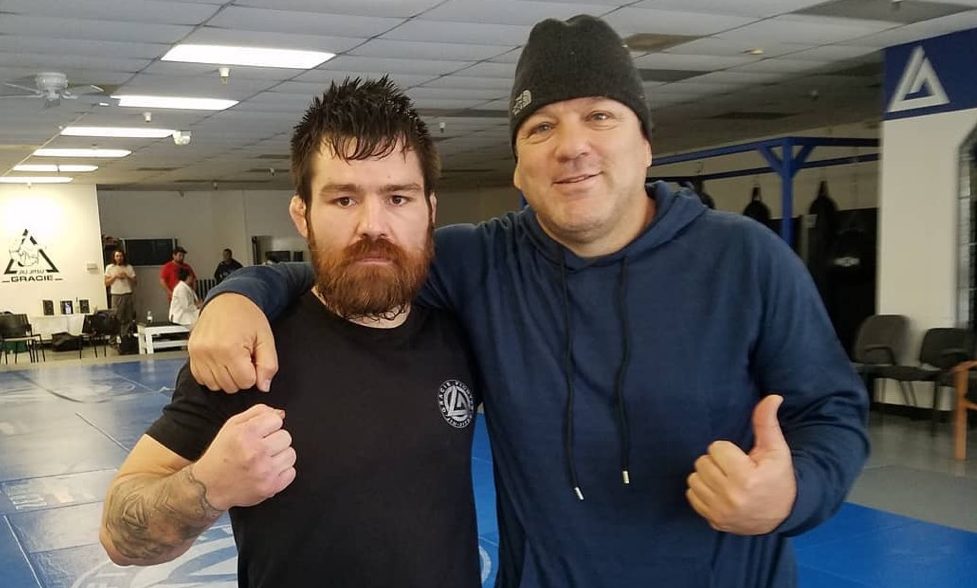 LFA 80’s Sean Cerveny: From the Streets of Stockton

If there’s one stigma that Nick and Nate Diaz have always brought into their fighting careers, it’s the fact that they were “straight from the streets of Stockton.”

Stockton has a population of just over 300,000 and sits smack dab in the center of California’s Central Valley, directly east of San Francisco. The history of the town is sort of a mixed bag of positive economic growth and a 2012 bankruptcy. In 2012, it was also deemed by Business Insider to be the 10th most dangerous city in America. While Stockton has made great strides to improve the city’s reputation, growing up there in the early part of the 2000s could be very tough.

Sean Cerveny grew up there. He actually ended up training at the famous Cesar Gracie Jiu-Jitsu gym with some very famous fighters. His story is probably not a unique tale for someone growing up in this part of the country.

“Fighting is something I kind of grew up doing,” Cerveny told Combat Press. “My first fight was when I was four years old. My dad made me fight my brother in the front yard, because we were arguing about something. I just realized when I was in school that I was kind of like a weirdo. I was a weird dude that didn’t really have a lot of friends. Whenever I was getting into fights, guys were messing with me. When I got into fights, guys would talk to me more, which I thought was cool.”

Cerveny wrestled on and off as a little kid, and his last stint was in high school. However, he was kicked out of school for fighting when he was 16. He chose to take the path of a career brawler at a young age. Today, he is 4-0 as a pro MMA fighter, and he holds a brown belt in Brazilian Jiu-Jitsu.

“The plan was always to fight,” Cerveny explained. “I just happened to fall in love with jiu-jitsu, but the plan was to fight. I fell in love with fighting, because guys were getting paid to do it, and it’s something I was already doing. I thought I’d just do this for a living. I started training with Gracie Fighter Jiu-Jitsu under Cesar Gracie with Darin Cooley, Nick and Nate Diaz, and Val Ignatov was my sambo coach. I wanted to fight first, and I wandered into the gym as a teenager.

“I was getting fucked up and realized I needed to train jiu-jitsu, and I just fell in love with it right away. I just kept training and started fighting.”

While he trains in Stockton for his fight camps, Cerveny recently moved to San Antonio. He moved down to Texas because his brother lives in Austin, and he wanted to be closer. There’s more to it than that, though.

“I like guns,” Cerveny admitted. “I think the laws out here in California are really stupid.”

Cerveny and his wife of three years packed up their three dogs and moved to the Lone Star State. It is there that he now trains with his striking coach Rock Hound. He still travels back home to work on his MMA skills.

“I had a little layoff, because I did some pro boxing too,” Cerveny said. “I just fought on a Top Rank boxing card a few months ago. I was taking some time off and working on my striking. I just started fighting MMA again last year, and I just started to pick up where I left off.”

Cerveny’s first three pro contests took place between June 2013 and October 2014. He hadn’t fought again until a boxing match just under a year ago and then took an MMA fight for Fury FC in June. Last month, while back training in Stockton, he got the call about a Legacy Fighting Alliance opportunity in Albuquerque, N.M.

“My manager — Mike Hale with Hale Fighter Management — just hit me up about it and offered it to me about a month ago,” said Cerveny.

LFA 80 will be the promotion’s first show of 2020 and the third under the league’s new UFC Fight Pass broadcast deal. Cerveny takes to the cage across from Edwin Cooper Jr., who is a local Albuquerque prospect with a perfect record through two pro outings.

“He’s a wrestler,” Cerveny said. “I know he’s got a really strong wrestling pedigree, and he trains out of that Greg Jackson gym. I don’t really care much. I’m just going to go out there and fight.”

Cerveny and Cooper are set to meet in the LFA’s featherweight division, but Cerveny also competes at bantamweight. Weight classes aren’t a huge concern for him. Regardless of how heavy he is when he steps on the scale, the goal is to become the best fighter in the world. A world championship is his ultimate career goal. And, like his Stockton counterparts, Cerveny always comes to the cage ready for war.

“Win or lose, I always come to fight,” said the California native. “You’ll see I always come to finish, and I don’t really care about winning decisions. I have the Lord Jesus Christ with me, and I just try to finish my opponent and not get finished. I don’t give a shit about getting a decision.”

Growing up on the streets of Stockton was rough, but it shaped Cerveny into the fighter he is today. He has won all of his first four fights by submission, and three of them ended in less than a minute. On Friday night, he is out to prove that he made the right choice at a very young age.