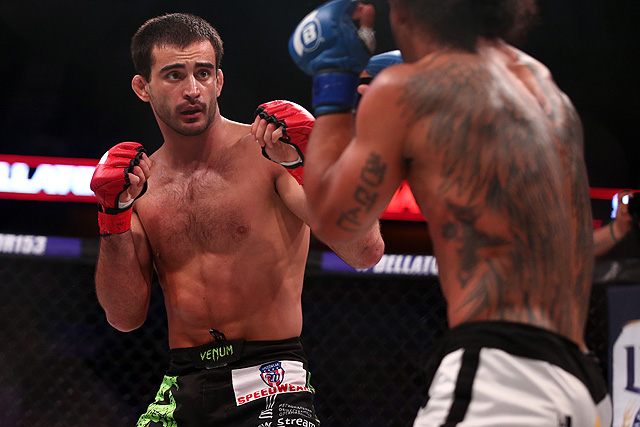 Bellator 229 takes place at the Pechanga Resort and Casino in Temecula, Calif., on Friday, Oct. 4.

The main event of the evening features former Bellator welterweight champion Andrey Koreshkov and UFC veteran Lorenz Larkin. Bellator had previously tried to set this fight up earlier in the year, but Larkin pulled out due to injury. Larkin has gone just 2-2 since signing with the promotion, and he hasn’t fought in almost a year. Koreshkov was able to win his fight in March against Larkin’s late-notice replacement Mike Jasper by unanimous decision.

The co-headliner heads to the lightweight division, where Bellator veterans Goiti Yamauchi and Saad Awad look to climb the ranks for a shot at the Bellator lightweight belt. Yamauchi is undoubtedly closer to this goal after winning in his last fight against Daniel Weichel. He is also only one fight removed from his bout against former Bellator lightweight champ Michael Chandler. Awad is on a two-fight skid.

Keri Taylor Melendez also makes her return to the Bellator cage in a catchweight battle against Mandy Polk. Kickboxing star Joe Schilling rounds out the main card in a middleweight scrap against Tony Johnson.

Lorenz Larkin has had a lot of ups and downs throughout his UFC and Bellator career. He meets former Bellator champion Andrey Koreshkov in the evening’s main event. Which version of Larkin should fans expect?

Larkin is something of an enigma. It’s hard to gauge just what to expect from him. The man came into Bellator with high hopes and immediately dropped his first two fights. Sure, Larkin lost to Douglas Lima and Paul Daley, who are among Bellator’s best at welterweight, but these were still disappointments for the UFC and Strikeforce veteran. Larkin has bounced back to win his two most recent fights against Ion Pascu and Fernando Gonzalez.

Larkin bowed out of the first attempt to make this fight due to injury. He will now have almost an entire year off before re-entering the cage. The 33-year-old is not the favorite in this fight, either. Koreshkov is one of the best welterweights Bellator has ever produced, and the hype for Larkin has significantly died down. Larkin has the UFC background, but he’s lost the luster he had when he was coming into Bellator riding a wave of victories over Neil Magny and Jorge Masvidal.

Koreshkov should win this fight. The former champ is an exhausting fighter to face. He is going to look to sap any life out of Larkin. Koreshkov has employed this strategy against many fighters, including former UFC champion Benson Henderson. It’ll be a tough fight, as Larkin likes the same approach. However, Larkin will give up four inches in reach and two inches in height to his counterpart. Koreshkov feeds on these sorts of contests where he can enjoy being the bigger fighter.

Joe Schilling, who holds just a 4-5 mark in his MMA career, will again be featured on the main card when he meets Tony Johnson. Why?

Schilling has the ability to deliver a thrilling finish, pure and simple. He is an exciting kickboxer, and that has carried over to his fights in MMA. He will stand and trade with someone if given the opportunity. Everybody loves a good knockout, and who better to give it to them than a kickboxer?

Unfortunately, Schilling has been on the wrong end of the knockout once. It came in his loss to Hisaki Kato. It wasn’t just any normal run-of-the-mill straight or a ground-and-pound onslaught, though; it was a Superman punch. That fight took place four years ago. Since then, Schilling has gone 2-0, albeit against weaker competition.

Schilling’s ground game needs significant work, and Johnson could make this an interesting fight if he can target this weakness. If Johnson can even do the basics and just secure a few takedowns, he could possibly take the fight on the scorecards.

Schilling doesn’t fare well against fighters that like to press him against the cage or grapple with him. His style is pure striking. In Schilling’s favor, he has an opponent in Johnson who has fought sparingly over the past five years. Schilling should be able to just come in and work his kickboxing, take the win, and collect his money.

It’s the co-main event of the evening, but let’s go with the lightweight affair between Goiti Yamauchi and Saad Awad. Yamauchi is an exciting grappler who is a pleasure to watch when he gets the opportunity to work his magic. Yamauchi rattled off three straight submission victories, including one over Ryan Couture, before losing to Michael Chandler at Bellator 192. He hasn’t fought since last November, when he beat Daniel Weichel by split decision. Awad has become a Bellator mainstay and one of their most experienced veterans, but he is currently on a two-fight skid with losses to Brandon Girtz and Benson Henderson.