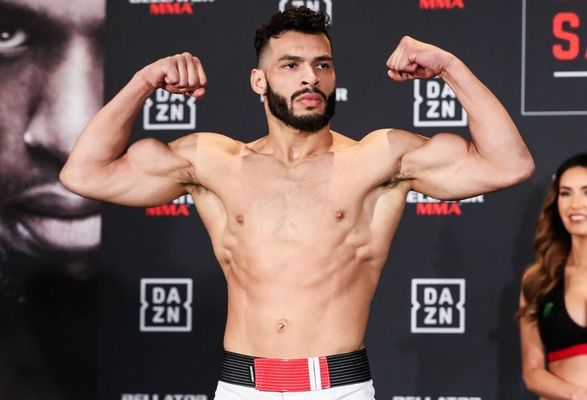 Brazil is a beautiful country that has been marred by poverty, especially in recent years. When both the 2014 FIFA World Cup and the 2016 Summer Olympics were hosted in the South American country, a great deal of that poverty and misuse of government funds was exposed on the global stage. Economic controversy loomed over both events, and the 2014 World Cup ended up being a precursor to a two-year-long economic crisis that lasted until the Summer Olympics came to town. However, if there’s one thing Brazil has always been great at, it’s producing fantastic martial artists.

Vinicius de Jesus might be known as “The Brazilian Bad Boy,” but in a lot of ways he’s just a kid from Brazil that had to get out of a bad situation. It’s no secret that growing up in many parts of Brazil can make for a tough life. That’s why so many kids get into martial arts as a way to better their lives.

“I got my start 15 years ago, maybe longer,” de Jesus told Combat Press. “I was 12 years old when my father put me into martial arts, because of problems with school and problems with my lifestyle. It became a passion to me when I was a kid, and in Brazil, I saw this sport as a way to get out of that lifestyle. There was too much violence, no respect, no money, and my father made me see a great opportunity in this sport of fighting. It was the fire in me.”

De Jesus is now a professional mixed martial artist. He holds a second-degree black belt in Brazilian Jiu-Jitsu and has lived in the United States for the last six years. His father, Vitor, is still his primary coach and mentor, but he also trains with the likes of BJJ superstar Marcelo Garcia and MMA veteran Nick Newell, as well as spending his training camps at the Renzo Gracie Academy in New York City. He owns his own gym in Norwalk, Conn., as well. De Jesus has obviously come a long way in the last decade and a half.

The Porto Alegre native is only 29 years old. He is currently 8-2 as a pro and was able to capture the CES welterweight title in his last fight at the promotion’s 55th event in March. De Jesus took a five-round decision over Jeremiah Wells at the show.

“The best learning experience I can get from that fight is, like, how I need to work on my running in the cage,” de Jesus said in jest. “I’m joking. I was running after my opponent for five fucking rounds. He was so afraid to be knocked down. He was so afraid to be put on the ground, and he didn’t engage the fight. I didn’t learn much from that fight. I just learned that I’m a tough motherfucker, and they don’t want to fight me. If they do come to fight, man, they’re going to get a fight. If you’re going to run, man, I’m just going to damage you as much as I can.”

It was a very lopsided win for de Jesus, who did a ton of damage despite not finding the finish. That being said, he was still able to capture the belt in a major regional promotion. The win put him one step closer to his ultimate goal as a fighter.

“The UFC,” de Jesus said. “I’m a world champion in CES — on UFC Fight Pass — and my goal is that CES gets me to the UFC. When I look around at this whole universe, it’s up to me and my team to put out there the best performance possible and get to the bosses and [UFC President] Dana White. Either by next year, or the end of this year, I want to have a preliminary fight in the UFC.”

De Jesus could get pretty close to that prize when he returns to action at CES MMA 58. On Saturday night, he faces Chris Lozano for his first title defense. He does not expect a repeat performance of his last fight. His hope is that Lozano comes ready to bang.

“I know he comes with some experience,” de Jesus said. “He’s got a solid background, you know — 14 fights in his career. He has his good times [and] his bad times, but when you get in there, I don’t give a shit about your history. I just want to destroy you, because you’re in my way.

“What I see is that he’s a guy who comes to fight — he doesn’t mind to throw some punches; he doesn’t mind going to the ground — and that’s what I like. I want him to come hungry to take my belt away, take my title away, take everything from me. Then, we will both get in the cage, the door will close, and it will be a war.”

De Jesus is clearly driven by the same energy that got him excited to be in martial arts as a kid. His whole life revolves around fighting and his family. With four kids, ranging in age from one and a half years old to age 12, plus a wife and his business ventures, he keeps himself very busy and very focused.

“I have my own business and my own management company — de Jesus Management,” said the welterweight champ. “We manage fighters. We are bringing a bunch of fighters from Brazil now to compete in the United States. I’m a family man, and I spend a lot of time with my kids. Sometimes, I don’t get to spend as much time as I’d like, because we are all pretty busy. But, I have good friends around me. I have good friends to protect my back, protect my front, and each side. You know, they can count on me as well. I just try to enjoy this life. I try to enjoy this life as much as possible.”

His youth in Brazil made de Jesus the man he is today, but he’s just getting started. On Saturday night, in an event that airs live on UFC Fight Pass, he will be back in action once again.

“I’m a fucking killer and a savage,” de Jesus said. “Every time I step into the cage, I’m not going to play. I’m going in to knock out opponents, finish them, and not give anybody any chance. Besides being a savage animal in the cage, I’m a lovely person and friend. I always like to meet new people, see new talent coming up, and also help them.”