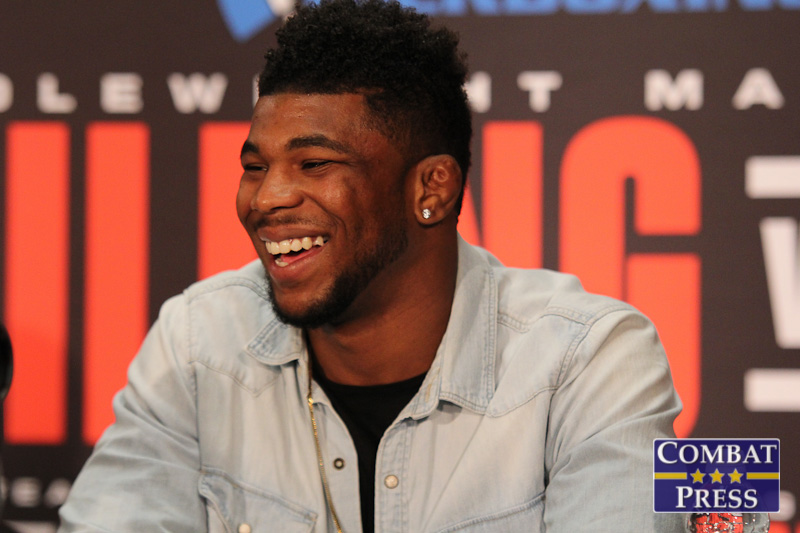 Ever since the late 1980s, the city of Compton, Calif., has come with a certain stigma. Some people may be too young to remember how it was sensationalized during the late 80s and early 90s. However, just like many places across the country that were tough environments to grow up in, things are not typically how they are portrayed in movies.

Joey Davis is the best NCAA Division II wrestler in history. After going through high school as a standout football player and two-time California state champion wrestler, he went to college at Notre Dame College of Ohio, where he went 133-0 to become the first ever Division II wrestler to end his college career without a loss. Davis wasn’t solely driven by the spirit of competition. He grew up in Compton, and it wasn’t all palm trees and sunshine.

“It was horrible,” Davis told Combat Press. “It was a low-income spot, and I had to get out of there. I made the best out of my situation, and my family did the best of that. My mom still lives in Compton. Her and my dad are not together anymore. I still go back to the hood every other day. I see where I came from, and they’re still not doing good. I want to be the change of that, and I will be the change of that. Compton is worse than what you see in movies and TV. It’s worse than what people are hearing, unless you really know what’s going on.”

Davis went to Santa Fe High School, about 30 minutes northwest of Compton in the Whittier School District. He wasn’t always a standout wrestler, but something changed inside of him about halfway through school.

“I lost plenty of street fights,” Davis admitted. “I wasn’t always the best at what I did. I can say this: it didn’t click for me until I was a junior in high school. I was always taking third and fourth, here and there, and I just said one year that I’m going to start grinding. I had a different mentality when I went to practice. I really knew I was changing when guys on my team started asking questions like, ‘What’s wrong with you? You’re acting crazy. Why are you doing that?’ I just really wanted to be the best at what I do.”

The California native started to really break out during his junior and senior years. In fact, he did so well that he started to gain the attention of some of the best coaches in the business.One of the most famous American wrestlers — an Olympic gold medalist and the head coach at Penn State — reached out to him directly.

“I got a call from Cael Sanderson, and he was saying that he truly wanted to recruit me, and this and that,” Davis explained. “But, at that same time, I got a call from my dad, and I was all excited, saying, ‘Hey dad, you won’t believe who just called me right now.’ I was all excited, and he said, ‘Well, you need to meet me at this donut shop right now, because I have a coach that wants to meet you here.’ I didn’t really care at the time, because I had just gotten a call from Cael Sanderson. He was one of my icons. He still is one of my icons. At the time, I met this coach at this donut shop, and I guess this guy from Notre Dame College flew all the way here in one day, just to talk to me. I signed right then and there. I couldn’t pass up the scholarship. I respected that a lot, and we still have a strong relationship to this day.”

That coach was Notre Dame’s Anthony Ralph. The meeting in that donut shop served as the springboard toward the best record in NCAA Division II history. It was Davis’s chance to get out of his hometown and has served to give him a new perspective on life.

“At the end of the day, I’m 25 years old now, I’ve traveled all over the world, I’ve seen different things, and I want those things that everybody else has, and I’m going to work toward that,” said Davis.

The next step for Davis was a career transition into mixed martial arts. Many successful wrestlers have or will go down this same path when they want to keep competing. However, it’s not just about the competition for Davis. It’s about making a better life for himself and his family.

“I had other things lined up,” Davis said. “I wasn’t sure how long I was going to be an MMA fighter. It wasn’t always part of my journey. But, at the time it came up, it was something I was always interested in doing.

After a 5-0 amateur career, Davis, who trains at Team Bodyshop under MMA veteran Antonio McKee, was picked up by Bellator MMA. He won his first four fights, two by knockout and two by decision. His success comes from his background, but that is not a reference to where he grew up or what he did in college. His background is all about the things he’s willing to do that others won’t do.

“I have the same work ethic as when I came to this sport until now,” Davis said. “I push myself — cardio-wise, how I trained before, and how I train now. I think people get sick of training with me. That’s fine, and I’m OK with that. I know where I want to end up and where I want to be — all the way to the top of the ladder until I have nowhere else to go.”

The next rung on that ladder comes on Friday night at Bellator 219 in Temecula, Calif. When Davis spoke to Combat Press, he did not yet have an opponent. This was despite finding out he would be on the card in December. One can only imagine that people are not exactly lined up around the corner waiting to fight a welterweight of his caliber. Yet, does it really matter to him who he fights?

Bellator finally announced that Davis would fight Marcus Anthony, who is 1-0 as a pro. This fight should serve as a test for both men. That being said, Davis knows what fans can expect from him.

“I’m a pleaser,” Davis said. “I want to please the fans. I believe that with my abilities, and all the things I’ve worked for through my career and my whole life, is going to show on March 29.”

Davis has come a long way in a short period of time. His childhood and college experiences have shaped him into what he is today, but he’s just getting started as a mixed martial artist. Bellator 219 will be another step closer to his goal of becoming the champion.