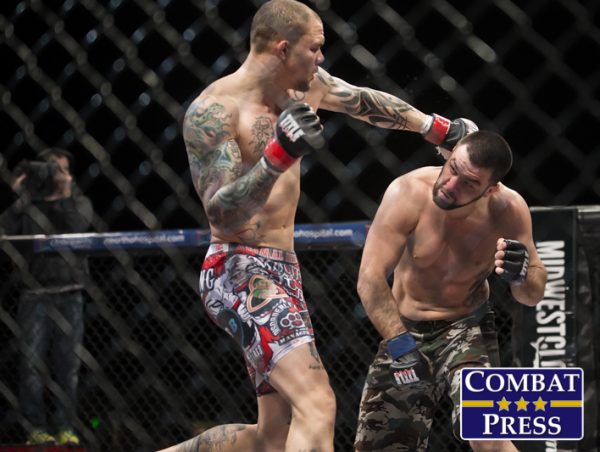 In this day and age, the keyboard warriors and internet trolls have a podium — probably for the first time in their miserable lives. They sit behind keyboards and act tough. These same people likely do not carry an ounce of courage in real life.

Courage can mean quitting a job to start your own business. It can also mean standing up for yourself when nobody else will. It also takes a lot of courage to get locked into a cage with another highly trained athlete where the only goal is to break the other guy, both physically and mentally. This is precisely what Anthony “Lionheart” Smith has been doing as a profession for over 10 years and 43 bouts.

Smith’s story is definitely unique. He started his pro MMA career at age 19. He is one of the only fighters in history to make it to his 30th fight before ever seeing the judges’ scorecards. Now, after 41 fights at 185 pounds, he is one of the top-ranked light heavyweights in the world following back-to-back wins over former UFC champions Rashad Evans and Mauricio “Shogun” Rua. Smith is lined up to fight the No. 2-ranked light heavyweight Volkan Oezdemir on Saturday night.

The only thing missing for Smith is respect.

“If anybody else thinks they could have done better, I didn’t see anybody else lining up these fights for them,” Smith told Combat Press. “The Rashad one — he was on a losing streak. Whatever. You want to talk about that? Fine. But Shogun? He was on a three-fight win streak, and they were talking about him being in line for a title. What are we talking about here? That’s where my frustration comes from.

“So far, it’s always been about how bad my opponents are. One of these days, they are going to have to sit back and say, ‘Damn, maybe he’s just that good.’ I’ll be 100 percent honest with you: I don’t think Volkan would beat Shogun. I don’t. So, we could talk all the shit we want about Shogun, but, until I fought him, there was nobody lining up to fight him. There was no one raising their hand and screaming that they wanted that fight. I was the only one.”

Smith is frustrated. Rightfully so, too. After all, he is finally at the top of his division. He’s 6-2 in his second UFC run. He’s only been to decision three times in his career. He has stopped 28 opponents. All of this, and yet people are still discounting him online.

At UFC Fight Night 138 in Moncton, New Brunswick, Canada, Smith will finally have his chance to shut the haters up, or so one might think.

“It doesn’t matter. It’s just noise. I don’t care about that. Here’s the deal: anybody that would say that would crumble into a pile of their own shit if Shogun stood face-to-face with them. It’s real easy to sit behind your computer, or sit at your house on your phone, and talk about how Shogun’s done, and he isn’t top of the division anymore, and blah, blah, blah-blah, blah-blah. That same person would shit their pants if they had to stand across the Octagon from him. It’s just noise, man.”

Smith stood across the cage from Shogun at UFC Fight Night 134 in July. He completely dismantled the Brazilian in 89 seconds, too. What was crazy was the size difference. One would expect a former middleweight to be on the lighter end of the light heavyweight division. Yet, just as he had against Evans, Smith towered over Shogun.

“That was a really big surprise to me,” Smith admitted. “You know me, man. I stay in my own lane, and I don’t really start shit with anybody else. I do my own thing, and I never really paid attention to how big the rest of the division was until I was in it. And then I started paying attention, and I’m like, ‘Jesus, I’m a big 205er.’ And I’m not even cutting that much weight. I should have been there this whole time, and I’m really shocked how I physically matched up with the rest of the division.”

Smith, a resident of Omaha, Neb., who trains out of Factory X Muay Thai in the Denver area, realized after a decade that he was fighting emaciated. He was always a strong, fast, intelligent fighter, but he was slowing down during camps. He was fighting at less than 100 percent in almost every bout, too. The decision to go up a division, which came after Smith dropped his last middleweight battle to Thiago Santos, has truly paid off.

“I can give you all the numbers, as far as my strength, power, speed and how that matches up with all the other 205ers in the division, but, at the end of the day, I just didn’t want to do it anymore. Once I moved up, the training was much better, my camp was much better, I was learning more, I was getting better faster, I was moving better — everything was better when I wasn’t cutting weight. Now, people realize that I was fighting at a really small percentage of my potential for a long time.”

Smith has a long-running relationship with coaches Scott Morton and Danny Molina in Omaha, and he plans to always stay with them. However, after moving around at a few local gyms, it was time to branch out. Through his connections with Brian Rogers and Chris Camozzi, Smith was able to land at Factory X. Now, he bounces back and forth between Omaha and Denver.

“Things are finally clicking,” Smith said. “I’ve always said, once things start clicking on all cylinders at the same time, people are going to be in trouble, and I think we reached that point. Moving to Factory X changed everything for me. I’m coming into my prime, and things are clicking.”

Oezdemir is no joke. He will truly be a tough test for Smith. With 11 knockouts in just 17 fights, the Swiss fighter has established himself as a knockout artist. However, he only has four UFC fights and stands at 3-1 in the promotion. The last time he saw the cage was in January, when he was finished in the second round by former light heavyweight champ Daniel Cormier.

“I think, stylistically, I’m a better striker,” said Smith. “I think he’s got a big hole in his grappling and wrestling. I think he’s kind of inexperienced. He has 17 fights, but he doesn’t have 17 fights at the highest level. He’s got like four, and one of those, he looked like dog shit. Cormier exposed him. He’s breakable. That’s really what I’m looking for.

“To be 100 percent honest with you, we all know Volkan can knock people out. He’s already proved that. What we haven’t seen is Volkan’s ability to be in a fight that isn’t going his way, turn it around, deal with the adversity, and still come out with the win. We haven’t seen him do that at a high level. I’ve been able to show that time and time and time again. It doesn’t matter what happens in a fight. I’m am always in it, and I will always find a way to turn it around. I’m going to find out who Volkan really is.”

Smith has always maintained that he is one of the best fighters in the world. He had trouble proving this claim while competing as a middleweight, but it’s a lot different to cut that kind of weight over and over again when you’re younger. Things change when you get older. Smith, who turned 30 after the Shogun fight, has finally cracked the code. His physical condition, his experience, and his coaching staff and teammates have created a brand new “Lionheart.”

So, what can the haters say now? Most of them have no idea who Smith is or where he is physically, compared to the previous stages in his career. Most of them don’t know that he has an impressive records of exciting fights. He thought that his last two performances would have silenced some critics. After he beats Oezdemir, there is only one more stop on his journey to the top.

“It’s whoever has the title, or whoever is contending for the title. That’s who I should fight, and I don’t see any other way around it. I don’t know what else I’m going to have to do. If we are fast-forwarding and I have a win over the number-two dude in the division, who else do I have to beat to get the title shot? It’s time for some new blood. People want to see some new faces. I think it’s my turn.”

Has all of Smith’s recent success gone straight to his head? Absolutely not. In years of interviews with Combat Press alone, he has always said he will make it to the top. Now that he is almost there, people are still doubting him. It’s up to them to tune in on Saturday night to either be proven right or wrong. Regardless of the outcome, there is a seismic shift happening in MMA right now, and Smith is helping to lead the charge.

“People need to watch this, because this is the beginning of the changing of the guard for the 205 division,” said the 10th-ranked fighter. “How many years has it been where it’s either Jon Jones, Alexander Gustafsson or Daniel Cormier in the top of the division? It’s been those three guys playing round robin with each other. It’s time for someone else to come in and show what they can do. It’s fun to see things like this happen. It’s fun to see someone come from behind when no one sees them coming, and jump in and make a big difference.”

Maybe, just maybe, those critics will finally sit there and wonder, “Damn, is this kid really that good?”

Smith would like to thank all of his coaches and training partners, including Scott Morton, Danny Molina, Marc Montoya and all of the guys at Factory X Muay Thai. He would also like to thanks his wife and kids, as well as his manager, Jim Walter, and his family, friends, fans and sponsors: Hypnotik, Modelo, Icon Meals, Metro PCS, Prime Society and Josh Kercher Custom Suits. Follow Smith on Twitter: @LionheartSmith and Instagram: @AnthonySmithUFC
Advertisement