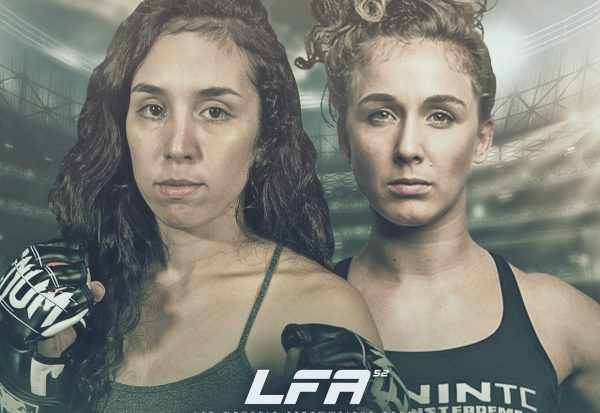 Where to start with this one? That’s a tough question, so let’s just get into it.

“I’m from Cleveland, Ohio, and I’ve been training nine years now, since I was 21 years old,” professional fighter Vanessa Demopoulos told Combat Press. “I found kickboxing, actually, through pole dancing. I’ve been an exotic entertainer for 11 years now. I was discovered as a pole dancer, and they said if I put that same determination and mindset toward fighting, I’d be great.

“I actually got kicked out of school for fighting [while] growing up. Fighting was something I always did, and I always had a lot of interest in martial arts. It wasn’t something I was able to do growing up. As an adult, when the opportunity came around, I just had to grab it. I actually moved here to Columbus just to train full-time.”

Let’s back up a bit. A career as a truly professional exotic entertainer is no easy job. The hours are tough, the nights are long, and it takes a lot out of a person physically. That being said, it builds toughness, which translates well into fighting.

“Pole dancing takes a lot of agility, a lot of body awareness, a lot of dexterity and flexibility, and you have to be quick with your reactions,” Demopoulos said. “It’s similar to what jiu-jitsu feels like, but in jiu-jitsu, you have options of tapping if you have to, or you’re safe if you are on the ground. With pole dancing, it’s very death-defying in the sense that you’re literally hanging on with, like, a limb, and one wrong move, you’re done. Like, I’m falling from two stories and that’s it. You only fall once.”

In the realm of jiu-jitsu, Demopoulos is a purple belt under world champion Vitor Oliveira, who is part of the renowned GF Team. Her skills as a pole dancer have allowed her to excel on the mat.

“I’m definitely more strategically aggressive,” Demopoulos explained. “Because I have so much body awareness, I’m able to do stuff that most other people are unable to get away with. I’m very wildly flexible. I’m like a strong, human rubber band. It accounts for some really cool stuff that translates to my jiu-jitsu game. I compete a lot in professional jiu-jitsu — a lot of submission grappling, like [Eddie Bravo Invitational] and Fight to Win — and I’ve been undefeated in professional jiu-jitsu so far. I’ve had a lot of really incredible opportunities because of my style of attacking.”

After going 6-1 as an amateur, the Ohio native made her foray into pro MMA in December with a first-round armbar win over Emme Weber at IT Fight Series 79. However, much to her chagrin, things cooled off quickly after that.

“I’m happy with the fact that I won my first pro fight in the first round,” said the BJJ ace. “It’s just been really, really difficult trying to find fights leading up to this point. I’m thankful that Itzel [Esquivel] is stepping into this cage and being so game. I’m like, let’s do this. I’ve been waiting. I’ve been sitting around twiddling my thumbs. I’ve been training and training and training, and it’s the best I’ve ever felt, because it’s like I’ve been in a 10-month training camp.”

On Friday night, at Legacy Fighting Alliance 52 in Belton, Texas, Demopoulos will finally get back in the saddle when she faces Esquivel on the main card. Esquivel is currently 3-2 as a pro and checks in at eight years the junior of the 30-year-old Ohioan.

“I know that she’s done a lot of boxing fights previously,” Demopoulos said. “She’s got a good karate background, so she’s a purist in her stand-up arts. I hear she’s got a purple belt in jiu-jitsu, so that’s pretty cool too. It sounds like a really badass match-up to me.”

Fighting and pole dancing is all Demopoulos really knows in life, so she brings a different dynamic to the cage. “Dynamic” is a good way to describe her entire life, too.

The name Demopoulos is Greek in origin. The first families carrying that surname were reported in census records in Illinois in 1920. While she was born in Ohio, she actually spent a lot of time in Greece during her early childhood.

“I actually was raised in Greece,” Demopoulos explained. “I was raised by my grandparents growing up. I’m half Greek by blood. Being raised by them, they actually moved to Greece when I was younger, so I grew up in Greece, and [Greek] was the first language that I could speak. I went to kindergarten over there, and I remember coming back to America and not being able to communicate with my own mother. Even today, I still eat home-cooked Greek food, go to Greek dances, and I live the Greek life. I told my grandpa the other day I couldn’t eat a lot of foods, and he said, ‘OK, I will make you lamb.’ I was like, ‘Oh my God!’”

So, one has to wonder, how did a girl from Ohio who grew up in Greece end up as a woman in the exotic entertainment business?

“I actually grew up in this industry,” Demopoulos said. “My father was in the industry. He was a D.J. and a manager. My mom was an exotic entertainer. For me, this was just, like, following the family. When I started in the industry, it was nice to have that type of guidance from my parents to tell me what was right and what was wrong, so I didn’t go down the wrong path.

“Growing up, I wasn’t awesome. I got myself caught in a lot of drugs, and I got myself homeless as a teenager. So, growing into an adult and becoming an exotic dancer really saved me and helped shape me in a more positive light.”

While Demopoulos trains full-time as a fighter, she still works as an exotic entertainer on the weekends.

“My life revolves around training,” Demopoulos admitted. “It’s my family and my friends that are on the mat. Everybody knows this is all I do, all day long. I’m in the gym morning, noon and night. And, when I’m not in the gym, I’m either repairing my body, taking a nap or working. I read books on my downtime between training sessions. If and when I do get a day, I like to try and make it to the woods and get a little lost outside.”

Demopoulos actually does have a few hobbies outside of training. She likes to study real estate and business, and she loves to write. In fact, she’s published.

“I’m an author,” said Demopoulos. “I wrote a book and started a business, a consulting firm for exotic entertainers. My book is called Stripper Bible. It’s a how-to for the exotic entertainment industry.”

The best word to describe the Greek fighter is probably “driven.” It really all goes back to what she said about being discovered as a fighter. She has the determination. She has the mindset to do great things. In the cage, she’s just getting started. It takes someone who really stands out to get on an LFA main card for only her second pro fight. This happened because people believe in her.

“The most amazing human, Reed Harris, introduced me to Ed [Soares, LFA CEO] when we were out in Brazil,” Demopoulos said. “I was helping Amanda Bobby Cooper get ready for her fight with Mackenzie Dern. It was just magic made in heaven right there. It was beautiful. I’ve been really looking forward to fighting for LFA, and I have been waiting and biding time.”

Demopoulos believes she has the upper hand over the more experienced Esquivel. It’s the intangibles that she really feels will get her hand raised by the end of the fight.

“My energy is unmatched,” Demopoulos said. “Who I am as a fighter is so elevated. It’s going to be hard for her to handle someone like myself.”

Demopoulos knows where she comes from. She knows who she is. She knows the potential she has, too. It all comes together for her showdown with Esquivel, which airs live on AXS TV.

“It’s a huge passion to give back to the community that gave so much to me,” Demopoulos said. “If it wasn’t for one or two people believing in me, I don’t even know where I would be today.”