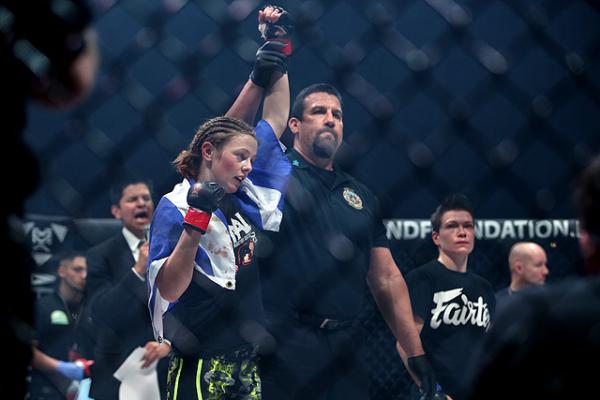 Joanne Calderwood is one of the more recognizable and experienced fighters in the world of mixed martial arts. The UFC strawweight fighter is also one of the more accomplished strikers. The former ISKA and WBC British Muay Thai champion has parlayed her prodigious striking skills into successful runs in two of the biggest MMA promotions — Invicta Fighting Championships and the UFC — in North America and an 11-3 record. However, is she really an elite fighter?

Despite all this recognition and success, “JoJo” has not won or even challenged for a world title in either promotion. Calderwood is a big, strong, physical, durable, experienced, punishing fighter with a supposedly world-class striking background and a functional ground game. Yet, when the lights shine the brightest and the opposition has been at its best, Calderwood has faltered and done so repeatedly. Here are some reasons why this has been the case:

A Lack of Athleticism

Calderwood possesses experience, savvy, durability and recuperative abilities that would have her fall into the parameters of the elite. While that has allowed her to compete with the highest levels of competition in the world’s biggest MMA promotion, it has also played a large part in her inability to get the key wins necessary for her to be ranked among the elite.

In fights with Cortney Casey, Maryna Moroz, Jessica Andrade and Cynthia Calvillo, the pedestrian nature of Calderwood’s athleticism has been highlighted. She was hurt badly by the inferior striker Casey, out-scrambled and submitted by Andrade, dropped and deftly submitted by Moroz, and taken down and outmaneuvered by an unproven, one-note fighter in Calvillo. In each of these fights, Calderwood had prodigious advantages in striking, skill, overall combat experience, size, durability and physicality. However, her lack of hand and foot speed, explosiveness, agility and mobility resulted in her being forced to fight her way out of bad spots before either eventually winning or getting swiftly overwhelmed and finished.

Calderwood’s move up to flyweight only compounds the issue. She will now face bigger, physically stronger and more durable opponents who also have noticeable advantages in hand/foot speed, explosiveness, quickness and mobility.

One of the biggest roadblocks Calderwood has faced during her time in the UFC was the fact that the promotion didn’t have a flyweight division until recently. Instead, “JoJo” had to cut down to strawweight, which drained her body. This was documented by Calderwood’s repeated complaints about competing at the weight class, as well as by the difference in her performance against former UFC strawweight title challenger and current Bellator flyweight title challenger Valérie “Trouble” Létourneau. These weight cuts ate into Calderwood’s stamina, overall durability and whatever little explosiveness she did possess.

The upside to her time at strawweight was that the Scottish fighter was able to lean on the physicality and durability that comes from being much bigger and stronger than the large majority of women she faced, which in turn allowed her to navigate her one-dimensional striking and one-note approach to grappling. In fights with Seo Hee Ham, the aforementioned Casey and Emily Kagan, Calderwood was able to navigate athletic disadvantages by getting her hands on her opponent and imposing her will through a series of clinch attacks, takedowns and ground control that carried her to victory.

Now, as a flyweight, Calderwood will have less pronounced advantages in size and strength, and that’s assuming these edges are not completely eliminated as she faces other strawweights who were in a similar predicament or bantamweights who were small for their weight class and made the drop down to 125 pounds, much like previous Calderwood conqueror Andrade, who decisively finished Calderwood in less than a round.

Calderwood is a 15-year veteran of combat sports. She has faced and overcome a number of internal and external issues to be successful in combat. One problem she has had, however, is an inability to get off to a quick start.

In numerous fights, Calderwood has been put on her heels early because of an inability or unwillingness to assert herself offensively or be defensively responsible early. This issue is particularly problematic due to her lack of athleticism and explosiveness. When Calderwood is put into a bad spot as a result of a slow start, she lacks the ability to quickly and dynamically turn a fight around. She is forced to slowly work her way into fights and grind her opponent out after she survives the initial onslaught.

At flyweight, this problem becomes more pronounced. Calderwood’s size and durability allowed her to recover and slowly turn around a strawweight fight. The consequences for not asserting herself early offensively or for being slow to respond defensively are much higher when she’s set to fight opponents who are oversized strawweights or, worse yet, bantamweights who are coming down.

A Lack of Wrestling and Grappling

It’s not that Calderwood can’t grapple or wrestle at all. The problem is that she doesn’t have a particularly layered game in that regard.

Calderwood’s takedowns are essentially limited to trips from the clinch. She can shoot for a double-leg takedown, but she is neither athletically dynamic enough to run through her opponent for the takedown or refined enough to chain attempts together against opponents who are effective in wrestling or grappling exchanges, as was the case against Calvillo and Andrade. In both fights, Calderwood didn’t even make a committed attempt to taking either woman down and was instead repeatedly taken down and out-scrambled.

The only instances where Calderwood’s wrestling assisted her in imposing her will came in fights against the aforementioned Casey and Ham, neither of whom have great takedown defense or the ability to get back to their feet when taken down.

On the ground, Calderwood has shown some effectiveness in establishing and maintaining top position. However, she hasn’t shown any real depth of skill from those positions, outside of a ground-and-pound attack. When she has been put on the bottom, Calderwood has been functionally effective, but unable to create scrambles to get back to her feet consistently. Calvillo out-positioned and out-worked Calderwood and even came close to submitting the Scot on multiple occasions. In fights with Andrade and Moroz, “JoJo” was submitted in quick fashion after she was unable to mount any meaningful offense or defend well enough to work her way out of an inferior position.

Once again, this becomes even more problematic at flyweight, where Calderwood will encounter opponents who have the experience, skill and strategy necessary to exploit this lack of development in her game. These opponents will control where the fight takes place, the length of the exchanges in that range and potentially even finish Calderwood via strikes or submissions. Sijara Eubanks, Roxanne Modafferi, Liz Carmouche, Lauren Murphy, Nicco Montaño and Montana De La Rosa are just a few of the fighters capable of completely taking advantage of Calderwood in these ranges.

Striking in the Pocket

Calderwood is a world-class striker who has claimed titles in the International Kickboxing Federation and the ISKA. She has reigned as the WBC Muay Thai British champion. While “JoJo” is a very good striker, she’s also a limited one.

Calderwood prefers to work at range while using mostly long kicks to the legs and body. These kicks bridge the gap and help her distract her opponent as she slides into the clinch, where she really shines through her use of combinations of tie-ups that allow her to control opponent. In the clinch, Calderwood manipulates her opponent’s defense and breaks them down with a series of knees, elbows and punches. As effective as Calderwood may be in these two spots, she is not always effective at establishing or maintaining the range she works at initially.

Again, Calderwood is a slow starter and a pedestrian athlete. Opponents are quick to close distance and collapse the fight to the pocket, where Calderwood can be exploited with big single shots or a combination of shots, as was the case in her fights with Ham, Moroz and Casey. When Calderwood has to press a fighter, her lack of a defined and refined punching game allows lesser strikers to counter her, beat her to the punch or out-position her. Calvillo and Létourneau did this repeatedly in their fights with Calderwood.

In the flyweight division, “JoJo” will face athletic, longer and bigger fighters who have the ability to back her up physically with pressure and volume. Katlyn Chookagian, Jennifer Maia and Jessica Eye should be capable of exploiting Calderwood in the pocket. Eubanks, Montaño and Valentina Shevchenko possess the style and skill necessary to counter Calderwood in the pocket or at range and then transition into the pocket.

Next week, at UFC Fight Night 135, Calderwood gets an official and fresh start at flyweight. This new beginning comes against Kalindra Faria, the type of opponent that Calderwood usually tends to beat. Unfortunately, this means it won’t give us any sort of hint as to Calderwood’s ability to turn the corner from good fighter to elite fighter. Even with a win over Faria, who is on a two-fight skid, Calderwood won’t establish herself as elite or even as a very good fighter in the division. Meanwhile, a loss for Calderwood would be tragic to her career, as it would demote the Scot to the ranks of a future journeywoman.