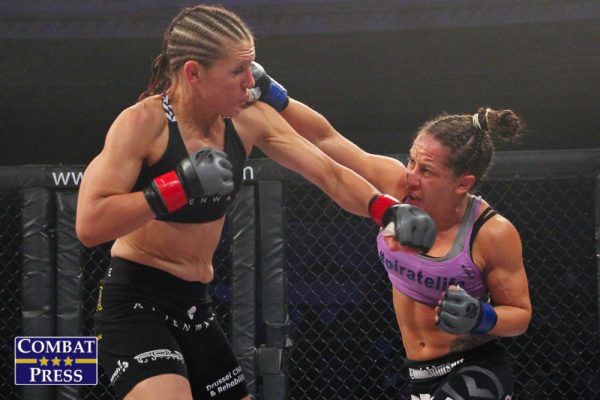 If you’re not having fun, what’s the point?

There is an old adage that, in one form or another, states, “If you want to find your ideal career, think about what you would be passionate about doing every day, if money was no object.” Basically, happiness lies in doing what you love. Unfortunately, too many people do not love what they do for work. In fact, they often hate their job.

People use phrases like “the grind” or “another day, another dollar,” because that’s what it feels like. However, there are a lot of people out there who love what they do every day. Not only is it not about the money for these people, but it doesn’t even feel like work.

Jodie Esquibel has many passions in life, from coffee to fighting. The 32-year-old Albuquerque, N.M., native has made a life out of what she loves.

“It’s fun if you can make your passion your job,” Esquibel told Combat Press. “I think it’s cool that I don’t work. I have a bunch of jobs, but I feel like I don’t work. I love everything I do. It’s about finding passion.”

In addition to her work in medicine, teaching yoga, and operating a coffee company with the love of her life, MMA veteran Keith Jardine, Esquibel is a pro fighter currently under contract with the UFC. Life is pretty great all around.

In October, Esquibel made her promotional debut against top-five strawweight Karolina Kowalkiewicz. In a hard-fought, three-round battle, the Polish fighter took the scorecards. The New Mexico native might have lost, but she learned a lot about herself.

“I’m thankful for every opportunity I receive, and the experience was great,” Esquibel said. “I belong in there, and I really believe that. I felt like I went out there and fought my heart out, and I was happy. I’m super thankful.

“I’ve been training in martial arts for a long time. It’s not about the wins and the titles and this, that and the other. It’s about me being a better martial artist and training and making friends. As I continue to learn about myself as a martial artist, I realized that’s what it’s about. I learned a lot about myself in that fight, and I’m thankful that I was tested. I tested myself in many ways. That was one thing that I took away from that fight — knowing that I am on the right path.”

The path has led Esquibel right into another great fight. On Friday night, at UFC Fight Night 131 in Utica, N.Y., she makes her second Octagon appearance. Esquibel faces former World Series of Fighting strawweight champion Jessica Aguilar. Aguilar entered the UFC in 2015 and lost her promotional debut to Claudia Gadelha. However, a torn ACL kept her out of action until May 2017, when she lost to Cortney Casey at UFC 211. Aguilar has been on the bench for over a year, another lengthy layoff.

“I think it’s a great match-up,” Esquibel said. “I asked for the fight myself. She’s a veteran, she’s been in there a long time, and I think it will be a fun test for myself.

“It’s going to be a great fight, and the match-up is made for fireworks. We will both go in there and stand toe-to-toe. It’s fun to watch somebody evolve, and I will be a different fighter than everybody has seen before.”

To the average person, Esquibel’s life sounds like a lot of work. Just the business endeavors alone would keep a person busy, but training as a full-time fighter is its own animal altogether.

“I’ve got a big gym here at [Jackson-Winkeljohn MMA],” Esquibel explained. “I’ve been with Mike Winkeljohn since I was 14, and he’s been a big part of my training. We do have a big family here, and it’s cool. I spend a lot of time at Donald Cerrone’s ranch. I’ve had a good camp, and I’m blessed.”

When she’s deep into camp, Esquibel dedicates almost 100 percent of her time to fighting. The time spent perfecting her craft takes precedence over everything else, so it’s good that she has a support system to keep all of the wheels in motion. When she’s done with her fight, she will have time to focus on her other passions.

“I don’t have a life outside the gym when I’m in camp,” said Esquibel, who currently sports a 6-3 record. “It’s just training. I own a yoga studio — I teach yoga — and we have Caveman Coffee. When I’m in camp, it’s time to focus on camp. I’m a paramedic, so I do on-call work for the state police here in New Mexico when I’m not in camp.”

If someone is truly passionate about something, they’re focused on the really important things in life. One of the most important things is to maintain a healthy mind and make everything else seem less stressful. That’s where her true goals can finally shine.

Esquibel lives an enviable life. She’s one of the lucky ones who truly does what she loves. Not everybody can say that. On Friday night, she will be back in the cage fighting a very game opponent. This is the next evolution in her fighting career.

“Right now, I’m having fun still, and I have yet to be the best martial artist I can be,” said Esquibel. “I will be a step closer to that [on] June 1.”