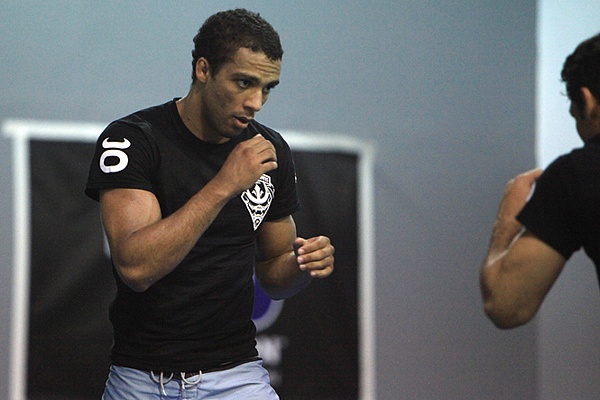 After what has been an eventful beginning to the UFC’s spring schedule, the train just keeps rollin’ down the tracks. The UFC Fight Night 128 card is upon us. This time, the organization heads to Atlantic City, N.J., on Saturday, April 21. While it’s a town that has definitely seen better days after once being a gambling mecca for the eastern United States, the UFC is trying its own luck that it can deliver another entertaining fight card.

The main event is an important lightweight bout featuring two fighters who have recently tangled with some of the best at 155 pounds. Edson Barboza is coming off a loss to current UFC lightweight champion Khabib Nurmagomedov, while his opponent, Kevin Lee, fought bravely (albeit foolishly) with a staph infection at UFC 216 and eventually suffered a submission loss to Tony Ferguson. The lightweight division continues to be a muddled mess, despite the UFC’s recent attempts to try to clarify things. Barboza and Lee are still both very much in the mix, however, and a win by either fighter could possibly set them up for a quick return to the title conversation.

The co-headliner is a featherweight bout between two fighters who actually have something in common — or, more accurately, someone in common. Both Cub Swanson and Frankie Edgar are coming off decisive losses to current No. 1 featherweight contender Brian Ortega. Swanson was submitted by Ortega last year, whereas Edgar suffered a knockout loss to Ortega at UFC 222 in March. It remains to be seen if it was wise for Edgar to accept another fight so soon after being on the receiving end of what looked like a scary finish. However, the winner of this fight might also find themselves right back in the title picture at 145 pounds.

The UFC Fight Pass preliminary card begins at 6:30 p.m. ET, followed by the Fox Sports 1 prelims at 8 p.m. ET and the main card at 10 p.m. ET, also on FS1. Combat Press writers Chris Huntemann and Dan Kuhl get you ready for the action in this edition of Toe-to-Toe.

Both headliners have fared well against much of the lightweight division, but each holds a loss in their last outing — Edson Barboza dropped a decision to Khabib Nurmagomedov and Kevin Lee was submitted by Tony Ferguson. Which of these two men proves to be the better fighter on Saturday? Can either one of them get over the hump against the division’s elite?

Kuhl: Barboza, who has been a top-10 guy for years, is set to meet Lee, who has only defeated one top-10 guy, Michael Chiesa. I’m still not completely sold on Lee as a future contender, but it’s up to him to change that this week. Granted, his only loss in the last two years was to Ferguson, a top lightweight, but he needs a marquee win. Barboza could be it.

There is little left to the imagination when it comes to Barboza. He is a very talented striker, and his jiu-jitsu has gotten better and better with time.. Let’s not forget that he also trains with Frankie Edgar, Ricardo Almeida, Mark Henry, et al., at a very high-level grappling camp. Will Lee be able to pull off one of his signature submissions? Maybe. After all, he did tap out Chiesa, who is a talented submission artist in his own right, and he also was a very successful wrestler. However, fights start standing, and this is where Barboza shines.

This one will end sooner rather than later. Lee doesn’t have a great answer for the Brazilian’s striking. Barboza keeps it nasty, avoids takedowns, and pulls off a big win to remain in the top five.

Huntemann: I’m pretty sure I’m not alone in thinking that Lee’s loss to Ferguson should come with some form of caveat. Ferguson submitted Lee fair and square, that much is true. However, Lee was fighting with a staph infection, which is not to be trifled with (and pretty dumb for Lee to do, since he could have easily infected Ferguson). It clearly affected his weight cut for the fight. One photo of Lee from the weigh-ins made him look like an extra from The Walking Dead.

We should see a much better — and healthier — version of Lee in this fight. He’ll be a very tough match-up for Barboza, too. Yet, Barboza will look much better than his last outing as well. Let’s face it: Nurmagomedov makes everyone he steps into the Octagon with look like an amateur, because he is just that good. I agree with my esteemed colleague that Barboza will keep Lee at bay and use his striking and improving ground game to win a hard-fought battle. Lee will have his moments, but it won’t be enough.

Huntemann: It’s a mistake for Edgar to take this fight so soon after being knocked out by Ortega. It’s not surprising that the former champ tried to downplay what happened and say that he wasn’t hurt that badly, but it’s just another case of fighter bravado. The UFC should have stepped in and protected Edgar from himself and not allowed him to fight. The UFC should take this sort of action a lot more often, frankly.

However, it is what it is. Edgar is fighting again, but Swanson wins this fight. Swanson’s own loss to Ortega late last year was scary in its own right, but he was holding his own before Ortega locked in the suffocating guillotine. Edgar won’t be 100 percent for this fight, and while Edgar’s toughness is legendary, Swanson is one of the harder-hitting and bigger-volume strikers in the UFC. He’ll batter Edgar, and eventually the referee will have to step in and stop the fight.

Kuhl: It is odd that Edgar would be fighting only six weeks after the first stoppage loss of his career. However, I’m not surprised at all. In a long, storied career, the guy has only had six of 29 fights not go his way, and one of those was a draw. Edgar’s tough as nails, and of course he downplayed the Ortega knockout. He’s never had that happen before.

Remember, these two men have met before. Now, it’s going to happen again, in what should be a very similar fight. Both guys are coming to bang. If it goes to the ground, Swanson will be the underdog. His loss to Edgar by submission in their 2014 outing was no fluke. Most of Swanson’s losses have happened on the mat. Therefore, Swanson will likely try to keep it standing and mimic Ortega’s success. However, Edgar is not getting knocked out again.

Edgar made a career out of going the distance with fighters who hit a lot harder than the killer Cub. This one goes the distance, with Edgar pulling off a decision win.

Ricky Simon — do we need to know this name?

Kuhl: Simon is a beast, and yet he’s only 25 years old. Even at that age, he already has 13 pro fights. He has only lost once, and, most recently, he defended the Legacy Fighting Alliance bantamweight title. This guy can win anywhere. He comes from a great camp up in Oregon. Simon definitely deserves this shot, and he’ll capitalize on the opportunity.

Huntemann: You sure do need to know this name. I had the pleasure of interviewing him recently, and it seems like a fairly prescient interview, in hindsight, since Simon openly discussed his close calls with signing with the UFC. Now, those dreams have become reality for him.

Simon comes from a tough camp filled with guys like Chael Sonnen and Brent Primus. His first official draw in the UFC following his successful appearance on Dana White’s Tuesday Night Contender Series is another tough Eastern European, Georgia’s Merab Dvalishvili, who is coming off a close loss to Frankie Saenz.

Simon will take down Dvalishvili early and often to hammer out a convincing win.

Smith is one of the toughest fighters in the UFC. She is willing to stand and trade with just about anyone, including Cristiane “Cyborg” Justino. Ladd had an impressive debut against Lina Länsberg last year after being called up from Invicta FC. Even though Smith may just be playing the role of gatekeeper in this fight, she will be a stiff test for Ladd. The contest will determine if Ladd is ready to step up and be a player in a bantamweight division that is in dire need of contenders.

Kuhl: Patrick Cummins and Corey Anderson.
Both men are former NCAA wrestlers. They have knockout power and a hunger to win. Cummins is trying to keep a two-fight winning streak alive and always puts on an exciting show, and Anderson badly needs to avoid the chopping block. This fight was supposed to go down in November, but a staph infection caused it to be postponed so Cummins could heal.

Kuhl: This card is jam-packed with fighters who have something to prove. Are Brett Johns, Aspen Ladd and Ricky Simon legit? What about Yuta Sasaki and Magomed Bibulatov? Is Frankie Edgar finally stoppable or was the Brian Ortega fight a fluke? There are a lot of questions to be answered, and likely some surprises to boot. Here’s an easy pairing: Cracker Jacks. You never know what mix of popcorn and nuts you will get, and there’s also a surprise in every box.

Huntemann: Since this card is taking place in Atlantic City, I’m going to take a gambling bent with this one. Invite your buddies over for a poker night and have the fights on in the background. Just sit back, relax, play some cards and enjoy what looks like a pretty solid set of free fights.