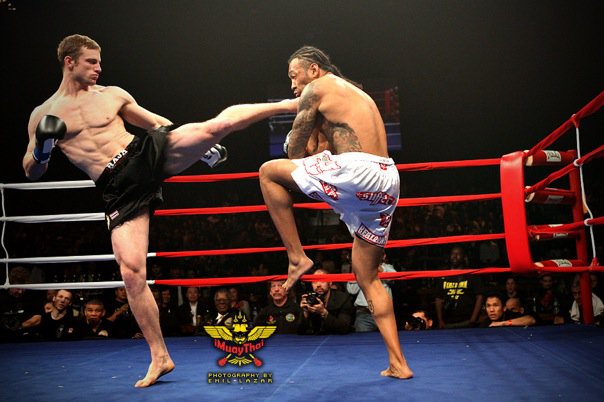 Many aspiring fighters might view mixed martial arts as a ticket to riches. They see Conor McGregor flying around in private jets and doing Burger King commercials. They watch Ronda Rousey parlay her fighting career into movie roles and a star spot at Wrestlemania. Quickly, they develop dollar signs in their eyes.

However, reality is very different for the vast majority of fighters toiling away. Take Victory Fighting Championship’s Andrew Kapel, for example.

“For me, it’s about two things,” Kapel told Combat Press. “I want to retire satisfied. I want to feel like I did what I wanted to do. But I also want to be making money. There’s so much of it being made right now that even if I get a small slice of that, I can be very satisfied. If I could get 10 fights in the UFC, I feel like I could retire off a few fight bonuses.”

In addition to a comfortable retirement, Kapel is also looking to provide for his wife and 2-year-old son, both of whom moved with Kapel to Colorado last year when he began training with Elevation Fight Team alongside fighters like the UFC’s Neil Magny and Drew Dober, as well as UFC bantamweight champion T.J. Dillashaw.

“It changed my perspective on what I was doing,” Kapel said of his family. “This is my chance to do something. I’m definitely taking it more serious now. My son needs my support, so I’m doing this for him.”

“It was also a huge change for me,” Kapel said of his move to Colorado. “This seemed like a cool place, and I was here to corner a friend who fought for [Legacy Fighting Alliance]. There are so many people in Denver who already fought and are now running schools. These guys have been doing this for 10 to 20 years. There’s a really good vibe here, and I’ve really bloomed.”

Kapel began his fighting career in his native Minnesota after taking up Thai kickboxing as a teenager.

“A buddy from high school told me it would be like Street Fighter, and I got hooked on it,” Kapel said. “Eventually I switched to jiu-jitsu, and eventually I made the switch to MMA. I was not a lot into the whole MMA culture and scene at first. Thai boxing is more nuanced and smaller, and I didn’t have a long-term vision for what I wanted to do.”

Kapel began his fighting career in 2008. He alternated wins and losses through his first six fights, with only one of those contests going the distance.

“I didn’t take MMA too seriously at first,” Kapel said. “I had a couple fights where I would just kick the guy and he fell down. But then I fought a guy who broke my nose and then choked me out, and I also probably took other fights that I shouldn’t have.”

Kapel went 7-2 in his next nine fights, with all seven wins coming by knockout or submission. All 12 of Kapel’s victories have come via finish to boot.

“I approach fighting like I want to close the show,” Kapel said. “People decide they want to grapple with me, so I take them down and submit them. I don’t want to score fights; I want to finish. But I’m also constantly trying to refine my striking, and wrestling is kind of my weak spot, so I’m also working on that.”

Kapel, whose record now stands at 12-6, has fought almost his entire career as a middleweight. He considers himself fortunate that he only has to cut around 10 pounds in preparation for a fight. He believes that being able to monitor fighters’ weight year-round would help address the ongoing issues with weight-cutting in MMA.

“Everyone wants to be bigger than their opponent,” Kapel said. “I eat whatever I eat, and when I’m training hard and doing my cardio, my weight doesn’t really fluctuate that much.”

Kapel will step into the cage again as a middleweight for Victory FC on Saturday, April 14, against Kevin Nowaczyk, who possesses a 19-3 mark. Undefeated since 2013, Nowaczyk is pushing Kapel to hold nothing back when the two meet in a few weeks’ time.

“I’m putting it all out there,” Kapel said. “I’m looking at every fight as the most important thing, and I’m using a lot of visualization, too. My strength-and-conditioning program feels great, and my training partners are pushing me harder than ever. I feel great.”

Even if Kapel is content with not chasing the huge paydays in MMA, it doesn’t mean he won’t put on a memorable performance if he has the chance to compete on the biggest stage.

“I see some guys in the UFC who look like they’re just there to fill some spots,” Kapel said. “But I know I can take their bodies with me.”

Kapel would like to thank his wife and son, as well as his coaches and teammates at Elevation Fight Team. Follow Andrew on Instagram: @kapel_kickin_it
Advertisement