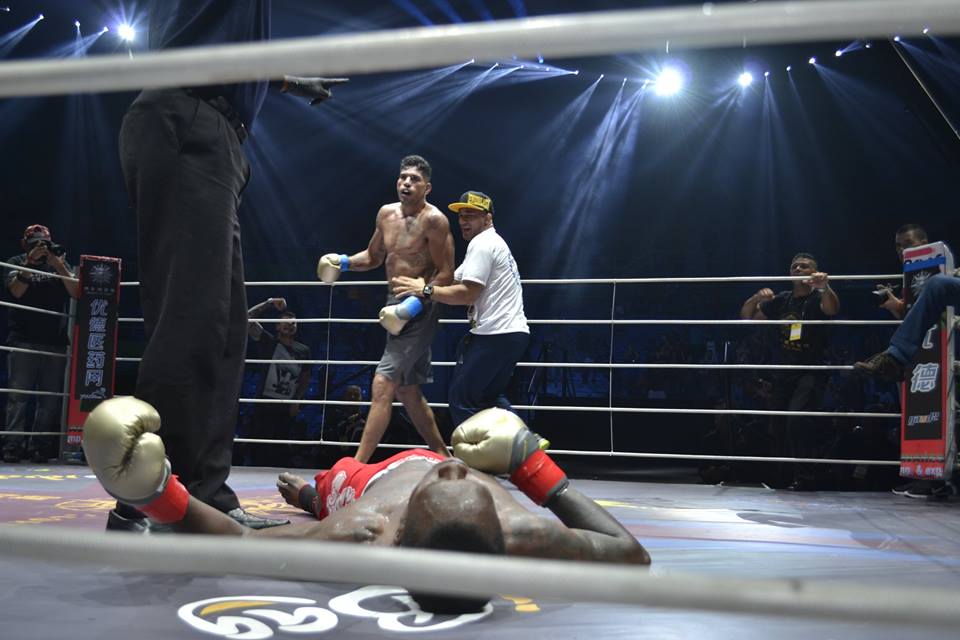 Fight of the Year – Alex Pereira vs. Israel Adesanya (Glory of Heroes 7)

The competition for the 2017 Combat Press Kickboxing “Fight of the Year” didn’t have a clear cut top contender unlike past years in 2015 and 2016. This year there were a few fights that delivered both in terms of talent and thrilling fast-paced action. The K-1 super welterweight championship tournament final between top-10 lightweight Chingiz Allazov and Yasuhiro Kido featured a whopping four knockdowns to cap off the 2017 Combat Press Kickboxing “Event of the Year.” Heavyweights Andrei Gerasimchuk and Felipe Micheletti threw down at Kunlun Fight 56 and Antonio Plazibat was crowned the K-1 heavyweight king in a firefight with Ibrahim El Bouni. Gonnapar Weerasakreck was a constant on the list below with his upset victory over Koya Urabe and close decision loss to K-1 lightweight champion Wei Rui.

The fight that featured the perfect combination of high-level technique, aggressive action, and a finish was the middleweight showdown between Israel Adesanya and current GLORY middleweight champion Alex Pereira at Glory of Heroes 7. Both men were heading into the contest with a loss, however the fight was a pivotal career moment for both men. The Nigerian-born Adesanya lost against Jason Wilnis in a controversial decision for the GLORY middleweight belt at GLORY 37. Prior to the loss, Adesanya was surging up the middleweight rankings with victories over Yousri Belgaroui (twice), Filip Verlinden and Bogdan Stoica. A win over Alex Pereira, who had previously beaten Adesanya in another contested decision at Glory of Heroes 1, could have potentially put Adesanya right back into the title picture in GLORY. Instead, Alex Pereira had his sight set on the gold belt following a tough loss against top-ranked welterweight Artur Kyshenko at Kunlun Fight 48 in 2016.

The clash of styles was apparent in the early going of the first round. Pereira came out with hard kicks to the legs and body from the outside and Adesanya showed off his slick movement and defensive prowess against the ropes. Adesanya started to make Pereira miss as he didn’t relent his position, slipped, counter attacked, and moved out of the range of the Brazilian’s dangerous kicks. Adesanya continued to press forward looking to bait Pereira into position for a counter. Pereira’s toughness and durability kept him standing to the end of the first round despite eating some heavy right hands from Adesanya late in the round.

After clearly winning the first round, Adesanya continue his fast-paced, tactical approach to the fight. Pereira was able to pick up his offensive output with his boxing combinations, but he couldn’t force Adesanya to exchange blindly with him. Adesanya expertly used Pereira’s aggression against him with a series of right hands and left hooks to the body that had the Brazilian stumbling on the ropes midway through the second round. Adesanya could sense the blood in the water, so he turned up his attack with a left high kick, step knee, and a duo of right crosses that connected and forced the referee to call a standing count. Following the called knockdown, Pereira continued to press forward despite eating shot after shot from his faster foe. Somehow, Pereira made it to the final bell in the second round.

At the start of the third and final round, the Brazilian was staring down his second straight loss. For Pereira to overcome the scorecards, he would need at least two knockdowns or a Hail Mary knockout against a fighter who hadn’t been knocked out in his 90-fight combat sports career. Pereira kicked off the third round with his hands up, ready to take the fight to the “Style Bender.” He pressed forward with a sense of urgency, exposing himself to get countered, but also creating his own opportunities instead of waiting on Adesanya to make a mistake. The change paid off for Pereira, who opened up the fight-ending shot with his relentless pressure. In the final exchange, Adesanya tried to counter Pereira with a left cross from the southpaw stance. Although Adesanya beat Pereira to the punch, Pereira slipped the shot left when he threw his right hook, which put Pereira in the perfect foot position and angle to throw his left hook inside of Adesanya’s guard from the orthodox stance. The nearly flawless shot sent Adesanya crashing to the mat for the first time in his professional career.

The combination of high-level technique, exhilarating exchanges, a dramatic turnaround, and a career-defining knockout is why Pereira’s third-round knockout against Adesanya is the 2017 Combat Press Kickboxing Fight of the Year.