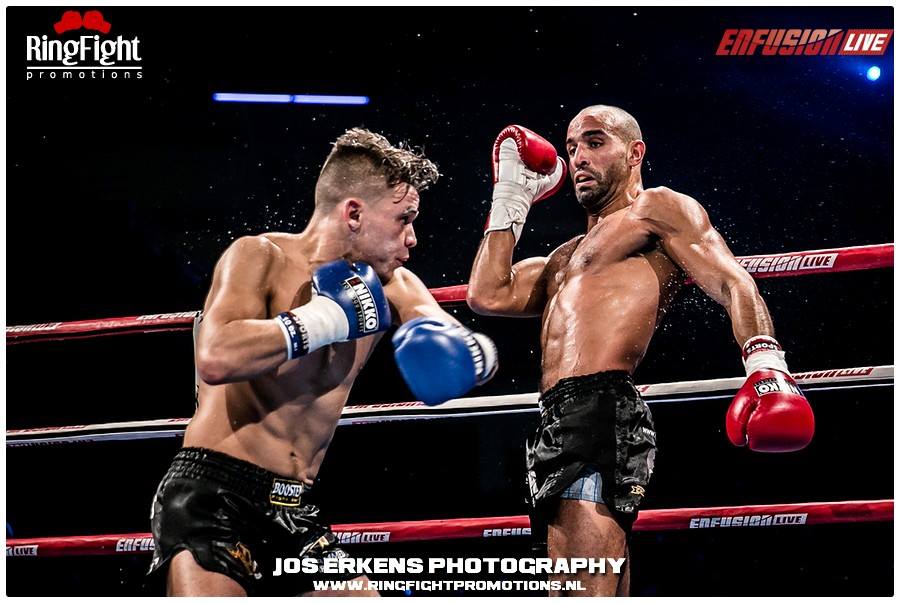 When 19-year-old Enfusion champion Mohammed Jaraya took on Moroccan kickboxing star Nordin Ben-Moh in the semifinals of the one-night $25,000 Enfusion MAX tournament on Feb. 27, the “Fight of the Year” was no longer in question. Two of the biggest stars in the promotion entered the ring with a combined 82 knockouts. The match-up was hyped as one of the best fights of the year, but no one could have imagined what would transpire in the ring that night. Words couldn’t possibly describe the dramatics of the fight, so I highly suggest you watch the fight (see above) before reading the rest of this article.

The first round was tremendous, with back-and-forth jockeying inside and a surprise knee knockdown from Ben-Moh that sealed the round with less than 10 seconds left. Jaraya picked up his aggression in the second frame. He pressured Ben-Moh against the ropes and let his boxing combinations go. The fighters were putting everything they had into the bout, despite having to fight one more time in the same night. After the second round, both fighters were tired, battered and beaten down from the exciting action in the first two rounds. The friends, fellow countrymen, and high-level kickboxers were respectful of each other’s abilities, but that didn’t matter when the third round started. Both men were looking for the finish.

No one could have expected what would happen in the third round. From the opening bell to the end of the fight, about 80 seconds of action, the dramatic momentum swings made for one of the best rounds in the sport’s history. Jaraya turned up his aggression tenfold as the round began. He pressed Ben-Moh against the ropes with a series of punches and landed a huge overhand right that sent Ben-Moh’s mouthpiece flying and put him flat on his back in the corner. He was in serious trouble, but the veteran of more than 70 fights found a way to survive the count. Jaraya smelled blood. The young prospect rushed in for the kill, but the savvy veteran met him with a flying knee that sent Jaraya crashing to the mat. Jaraya could barely make it to his feet as the tide turned in Ben-Moh’s favor.

The action restarted immediately after Jaraya somehow made it back to his feet. Jaraya continued to push forward and put a final, devastating ending to the “Fight of the Year.” A lightning right cross put Ben-Moh completely out in the middle of the ring. The fight was over. Jaraya had conquered his toughest test to date in a fight like no other.