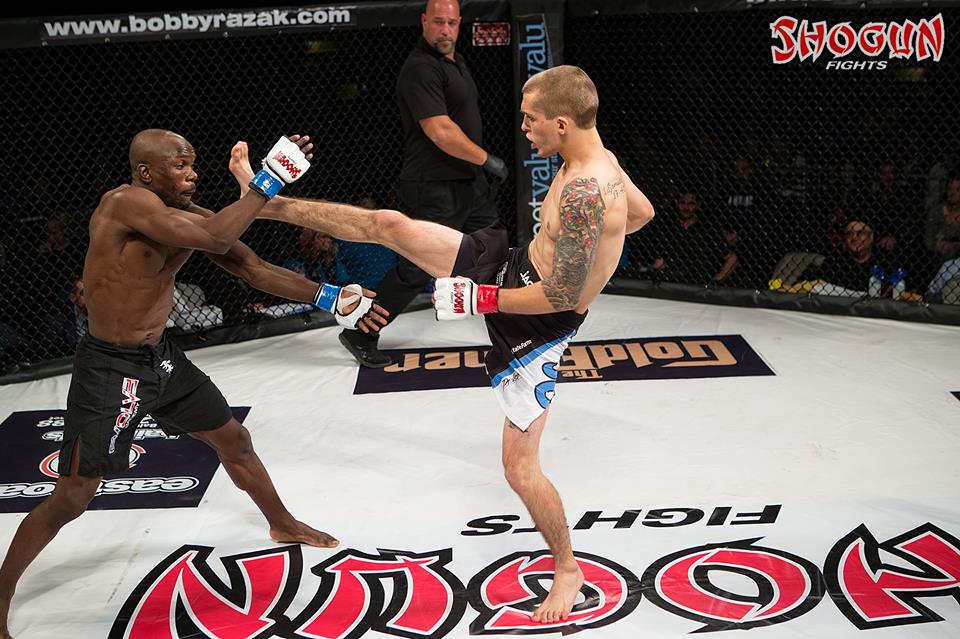 Some fighters enjoy preparing for a fight the most. They bask in the grind of sweating day in, day out with their teammates as they prepare for battle. Some fighters enjoy the fight itself the most. They’re sick and tired of getting beaten up every day in practice, so now the they have the chance to beat up someone else. Then there’s Shogun Fights flyweight champion Greg Fischer.

There’s no question which part of a fighter’s life is Fischer’s favorite. It’s what happens after the fight, when Fischer is able to indulge in his other passion in life: food.

“Anyone who knows me knows I’m a huge foodie,” Fischer told Combat Press. “I used to be really into salty and savory foods, but right now I’m all about the sweets. There’s a breakfast place in Baltimore I like to go after fights that’s open all night and [has] donuts, pancakes, French toast and ice cream. My coach also has a tradition where on the morning after a fight, he makes a big batch of sausage, gravy and biscuits for guys who fought the night before.”

Despite his occasional indulgences, Fischer maintains the discipline necessary to make weight as a pro mixed martial artist. This discipline developed as a result of Fischer playing “every sport” while growing up in Jarrettsville, Md., north of Baltimore. Fischer specialized in soccer and baseball as a child before he started wrestling in junior high school and kept at it throughout high school.

When Fischer graduated high school and enrolled in a local community college, he discovered it had no wrestling team. A friend was training at Method MMA in Forest Hill, Md., and suggested Fischer give it a try.

“He talked me into trying jiu-jitsu and I started winning some tournaments, so I just started training jiu-jitsu full time,” Fischer said.

Fischer lost a close split decision in his amateur debut in 2012, but he has not lost since then and now boasts an undefeated record in his six pro fights. He has fought exclusively for the Baltimore-based Shogun Fights during his pro career. Fischer enjoys the familiarity that fighting for the promotion allows him.

“I get to sleep in my own bed after weigh-ins, and I don’t have to travel,” Fischer said. “When I fought as an amateur in Virginia, I had to travel forever to get to weigh-ins. I also get to fight in front of my hometown crowd, and it’s the only organization in Maryland.

“They’ve started bringing in more talent from outside of Maryland, so they really try to create a deep talent pool. The production value has also gone way up lately. They now have sponsors at the weigh-ins, and when you check in on the day of the fight, there are cameras that follow you. It’s really cool.”

Fischer was crowned the inaugural Shogun Fights flyweight champion at the promotion’s last event in April. He defeated Martin Davila in a rematch of a previous bout between the two at Shogun Fights 14 last year.

“There were some people who thought our first fight was a lot closer,” Fischer said. “But I dominated him the second time and left no doubt. I’m happy to win the inaugural Shogun Fights flyweight championship. No matter what I do and where I go in my career, I’ll always be happy to be the first-ever titleholder in my weight class.”

Fischer will make his first title defense at Shogun Fights 17 on Saturday, Oct. 7, in Baltimore against Albert Benjamin, who is also undefeated in his first two pro fights. Benjamin is a member of Evolve Academy in Gaithersburg, Md.

“I’ve fought two of his teammates before, and two of my teammates fought him before,” Fischer said. “So our gyms know each other very well. He’s a good fighter from a good gym, but I’ve just been training and preparing like I usually do.”

While Fischer is happy competing for Shogun Fights and is aware that a big payday in MMA is typically reserved for the Conor McGregors and Georges St-Pierres of the world, his hunger for a bigger stage is probably the only one that rivals his hunger for delicious food.

“The UFC is the NFL of MMA,” Fischer said. “But Bellator is a big promotion, too. I just want to be with any big promotion, with big fights and big paydays, and where there are more eyes on me. [Somewhere] where I can make it to where I live comfortably and go to the gym every day and then show what I do in that gym when I step into the cage. You have to be someone people want to see.”

Fischer would like to thank MMA fans, his teammates and coaches at Method MMA, and his sponsors, including Forest Hill Automotive. Follow Fischer on Instagram: @gfischer3
Advertisement