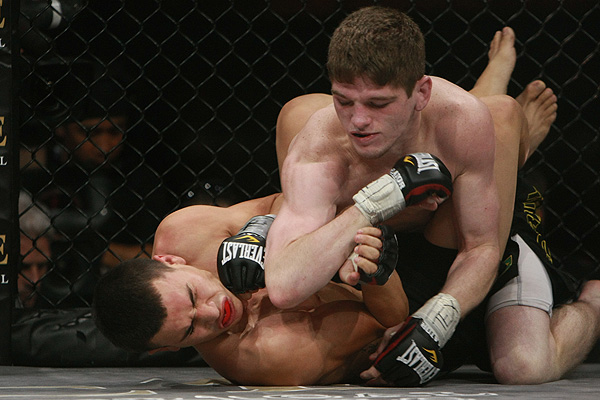 The year 2020 has been one of hard-luck stories, politically charged current events and utter chaos. However, not all is bad in the world. People are getting outside more, some businesses are actually thriving, and sports have returned, albeit with little-to-no live fans.

Oklahoma’s own Jimmy Flick hasn’t had too bad of a year thus far either. The father of two young girls was able to squeeze in a professional MMA title win before the coronavirus (COVID-19) pandemic shutdowns began. Luckily, he also has a job that fits right into the pandemic.

“I work in the plastic industry,” Flick told Combat Press. “We’ve been doing a lot of work with the plexiglass. We’ve been cutting up thin pieces of plastic for people to make masks. I know this pandemic has made it really hard on a lot of people, and they’ve been losing their jobs. They’ve been on unemployment. I’ve been real fortunate with my job, and I have not missed a day of work. I’ve been able to stay super busy with work and taking care of my family and providing for them. I’ve also been working on opening up a business for my wife, as she pursues her career as a nail technician.”

The last few years were a much simpler time for Flick. He entered 2017 with an 8-3 pro record and kicked off the year with a win in February. Then, after his second daughter was born in early June of that year, he took a short-notice fight in a Legacy Fighting Alliance headliner.

At LFA 16, Flick tapped Bedford in the second half of round three. His next action came in the spring of 2018, when he faced now-UFC standout Chris Gutierrez, who knocked him out. Flick recovered with back-to-back second-round submission wins before dropping another knockout in February 2019. It was his last fight before the now-infamous events of 2020. The loss caused him to make some changes.

“I train out of Broken Arrow, Oklahoma, with Coach Leo Perrucci at Forza Combat,” Flick explained. “That’s where I work my Muay Thai. After I got knocked out by Ray Rodriguez, I knew I needed to switch it up and get better stand-up work in, so I’ve been working with Coach Leo. I had a kickboxing fight against Matt Murphy where I dominated, and my highlight reel got over 22,000 views. It’s really changed my game up a lot. I still work with Thomas Longacre out of Thunderkick Fitness in Tulsa. I work a lot of my jiu-jitsu and kickboxing over there.”

Flick entered the new year with a beefed-up camp, a kickboxing win under his belt, and a renewed sense of purpose.

As for his other goal, things are also moving in the right direction. In late February, he was scheduled to face Ryan Hollis for the Freestyle Cage Fighting flyweight championship, but Hollis pulled out. Luckily, a new competitor came in on short notice.

“I had 11-7 Jesse Bazzi step up,” Flick said. “Bazzi was coming off a unanimous-decision loss to UFC vet Eric Shelton, so he was a game opponent. He stepped up on short notice, and I was able to get the armbar finish in round one. Most of his losses are by decision, so to fight a guy like that and get the armbar win was awesome. I won the FCF title. I had a good weight cut to 125 [pounds], and I couldn’t have felt better.”

Flick was ready to get right back in the cage after his FCF title win. He was on the hunt for the LFA flyweight strap next. After Brandon Royval vacated the belt to join the ranks of the UFC earlier in the year, Flick had a verbal agreement to face Royval’s teammate, Sid Bice, for the title in April. Of course, that didn’t happen after the pandemic led to numerous shutdowns starting in March.

In early March, while sports were getting canceled, so was everything else. Schools were going remote, but Flick’s daughter, who was 7 years old at the time, was still in school for the first couple of weeks of March.

“I was actually able to show up to the school and show them my title and talk to the kids about me, because my little girl was able to go to the fight,” said the newly minted champ. “It was her first time to go watch me fight, because it was an all-age event. Most of the time, I go fight in a casino, which is 21 and up. She was super excited to go, and I was able to go to her school and show them my belt.

“Shortly after that, the pandemic hit pretty hard, and she’s been at home ever since. Her birthday was April 30, and we had to celebrate that at home with a small amount of family. My other one turned three [on] June 2, and the pandemic was still going on, so after this fight, we’ve got a pool party to plan for them. We’re going to do both of their parties together.”

In the meantime, Flick found out that his LFA party was back on, but with a new opponent. He is guessing that Bice is likely fighting on Dana White’s Tuesday Night Contender Series this summer, although nothing has been officially announced. Flick, however, found out about the LFA’s plans to get back to business about a month and a half ago.

“All I heard was that LFA was coming back on July 10, so I wanted to get on that card,” said Flick. “I didn’t know they were doing four events. My manager is Dorothy [Faas] — she runs Freestyle Cage Fighting — and I told her to reach out to them and tell them I wanted to fight. They offered me a title fight [on] July 24.

“That’s how I found out about Greg Fischer.”

Fischer went pro over five years ago. He, like Flick, is on the taller end for a flyweight. In fact, at 5-foot-8, he’s even got a two-inch height advantage over Flick. He trains at Jackson-Winkeljohn for his fight camps and is a personal trainer with a degree in exercise science. He’s a bit of a fitness nut, which also means he likely has a deep gas tank. However, Flick has faced much more experienced opponents in his career, including Bedford, Rodriguez, Will Campuzano and Cee Jay Hamilton.

“He has a really good management company, and he’s from Maryland,” Flick said. “He’s 10-1 and is a well-rounded fighter. He comes off as more of a ground fighter, like me. He has a lot of submission wins or decision wins. I also know he’s been doing his training camps in Albuquerque, N.M., for a couple of years now. He travels back and forth from Maryland to Albuquerque to get that training in down there. I’m super excited to fight a really game [flyweight].”

Flick has been fighting as a professional for over a decade now, but he is still only 29 years old. He has a bright future and his best years ahead of him. Flick may not be drinking pop this year, but a good pop on Fischer’s chin would be his ticket to an LFA title and likely a shot at the Octagon. He likes the position he’s in right now, as he’s poised to make big waves on Friday night in the main event at LFA 86, which airs live on UFC Fight Pass.