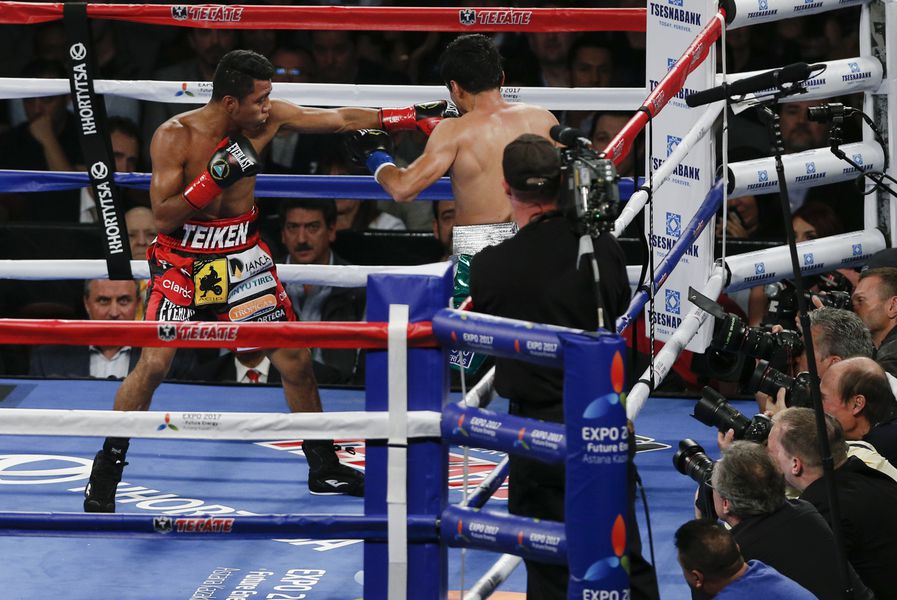 The evening of Saturday, Sept. 9, will mark a couple of firsts in the career of former WBC super flyweight champion and Ring Magazine’s No. 4 pound-for-pound boxer Román “Chocolatito” González. It will be his first time going into a fight with a loss on his professional record. It will also be his first HBO Boxing headliner slot after playing a supporting role to fan-favorite middleweight champ Gennady Gennadyevich Golovkin for his last five consecutive fights.

Emerging from Golovkin’s shadow to claim his own well-deserved spotlight, the 46-1 Chocolatito is out to erase the lone blemish from his record in a WBC-mandated rematch against the new champion, Srisaket Sor Rungvisai (43-4-1), who snapped González’s 46-fight undefeated streak with a controversial majority-decision victory over the Nicaraguan this past March in New York City’s Madison Square Garden. Their initial slugfest was a high-octane “Fight of the Year” candidate, despite being marred by multiple instances of unintentional clashing heads throughout the 12 rounds. Following a quick first-round knockdown by Sor Rungvisai, González took a full count to recover. Then, a cranial collision left a significant cut just outside of González’s right eye that, despite his cut man’s best efforts, leaked like a faucet for the remainder of the match. This arguably played a substantial role in the crowning of the new Thai champ, even though Sor Rungvisai had a point deducted for a subsequent butting of heads in the sixth round after failing to heed referee Steve Willis’s incessant — and entertainingly emphatic — warnings.

The rematch, which takes place at the Stubhub Center in Carson, Calif., is likely to look quite different from the first fight. Both of the major deciding factors from the first fight — the cuts from headbutts and the early knockdown of González — have a slim chance of happening again. This match is perfectly positioned to capitalize off of a primed general American populace that just witnessed an exceedingly entertaining boxing match between Floyd Mayweather Jr. and Conor McGregor. It will be shown to HBO subscribers with no additional pay-per-view fee required.

Also on the HBO Boxing After Dark presentation in the co-feature slot, undefeated Japanese WBO junior bantamweight champion Naoya Inoue, who sits at 13-0, will make his debut on American soil in an attempt to defend his title for a sixth time. Inoue is on a tear, having finished his last three opponents in dramatic fashion, and will have little problem becoming a fan-favorite should he maintain his brutal fighting style and successful career trajectory. The challenger, former WBO-NABO bantamweight titleholder and Cleveland native Antonio “Carita” Nieves, who holds a 17-1-2 mark, will enter this title bout after his first professional loss, which came via split decision. Nieves is dropping down from bantamweight to junior bantamweight for the opportunity to claim another title.

Another WBC-mandated match opens up the broadcast. This one is a super flyweight interim title bout between former Chocolatito victims Carlos “Principe” Cuadras, whose record stands at 36-1-1, and Juan Francisco “Gallo” Estrada, who possesses a 35-2 mark. The WBC had initially selected Cuadras as the top contender to face the winner of the first match between González and Sor Rungvisai, but WBC President Mauricio Sulaiman ordered a change of plans in the wake of the aforementioned controversial decision in favor of the Thai boxer. As a result, this interim title match has been set to determine the next challenger to the super flyweight crown.

This upcoming Boxing After Dark broadcast is arguably the single best lighter weight class boxing showcase put together in recent years. It contains three championship fights and includes two fighters in the Ring Magazine pound-for-pound top-10 list — González and Inoue, both of whom have reputations for delivering exceptionally violent in-ring performances. It’s every bit the can’t-miss boxing show that Mayweather/McGregor and Canelo/Golovkin are, and any true combat-sports fan would be remiss to pass it up.