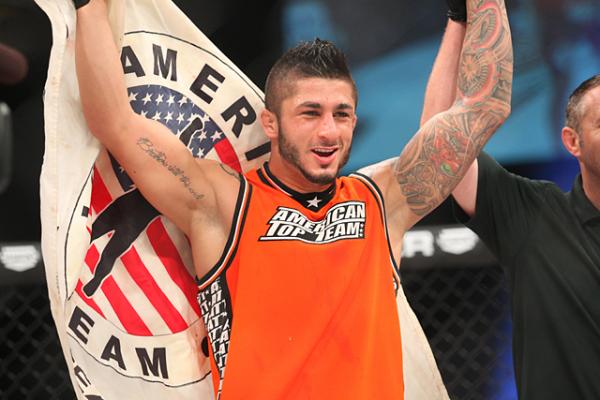 It’s been an interesting seven-plus years in the MMA game for Sabah Homasi.

Since his debut back in 2009, the American Top Team product has been getting around pretty well for a young and relatively unknown fighter. He has competed inside the Strikeforce cage. He has fought for Bellator multiples times. He has even competed on The Ultimate Fighter during the reality show’s 21st season.

Homasi’s resume, filled with appearances for the major organizations, might look good, but it doesn’t really mean much to the 27-year-old fighter. He is fighting to make a living. It doesn’t necessarily have to be as part of the biggest show in the world, it just has to pay like it.

“Honestly, it doesn’t matter which organization I fight for,” Homasi told Combat Press. “A fight is a fight at the end of the day. Every time I go in there, the objective is still the same, and that is to get my hand raised. I can give two shits as long I am getting paid. I could fight for whichever promotion as long as they are paying me money and I am able to pay my bills.”

There aren’t many ways for fighters to cash in on big contracts in this sport as it stands today. Only a handful of fighters can comfortably say they don’t have to work ever again because of the money they made in MMA. One way to do make this kind of money is to fight for the world’s biggest mixed martial arts promotion, the UFC. But that alone is not enough these days. Getting there is only half the battle.

We’ve seen it over and over again. Fighters sign with a major promotion and don’t do very well. Then comes the pink slip. Next thing you know, they are fighting for little money in smaller organizations around the globe. They have to pay the bills and feed their families somehow.

Homasi is well aware of this common occurrence within the sport. He has probably seen it play out multiple times as a member of such a high-profile camp as American Top Team.

“The ultimate goal, honestly, is to get into the UFC,” said Homasi. “Once I am there, [the goal is to] make a lot of noise in their welterweight division. A lot of my teammates are top contenders in the UFC. I know with whom I train with and I know what I am capable of doing. It is only a matter of time until I step back into the big show.”

Homasi’s march toward the Octagon continues at Titan FC 40. His opponent, the aforementioned Parsons, is a relative newcomer to the sport, with only a 4-1 record and his biggest win coming inside the Titan cage just a little over a month ago. It is hard to say what caliber of fighter Parsons is or can become. Heck, Jon Jones was once only 4-0 with little to no fanfare.

“I’m going to do what I do anyways. It doesn’t matter if I’m the underdog or I’m the favorite,” said Homasi. “I don’t care about that. At the end of the day, I am a fighter, and my job is to go in there and fight. I don’t care who I’m fighting. I got one goal when I go in there, and that is to put in work. It doesn’t put any more pressure on me. I [have] been in this sport for a while now and I’ve come to a point where I handle things very well and none of that talk really bothers me.”

There are some rumblings that this contest might have title implications for Titan FC’s welterweight division. It is very common practice for the UFC to bring over champions from promotions like Titan FC, a promotion that already gets airtime on the company’s online streaming services.

Hosami sees things a little bit different, though. If he is going to get a step up in competition and fight for the Titan FC championship, he wants a new contract to go with the opportunity. Who could blame him? Equal pay for equal work, is how the saying goes.

“If they are willing to give me a title fight, I hope the money is going to be a lot better, because I am telling you right now, I am not taking no goddamn title fight with what they are paying me,” Homasi said. “I signed this contract because they are going to keep me busy and give me fights and stuff like that. But if we are talking title here — you know, five rounds, game opponent — then the number has to go up. I’m not going to fight for a title against a tough dude [and] go five hard rounds for chump change.”

This fight against Parsons just got a whole lot more interesting, in and out of the cage, for Hosami and for Titan FC fans.