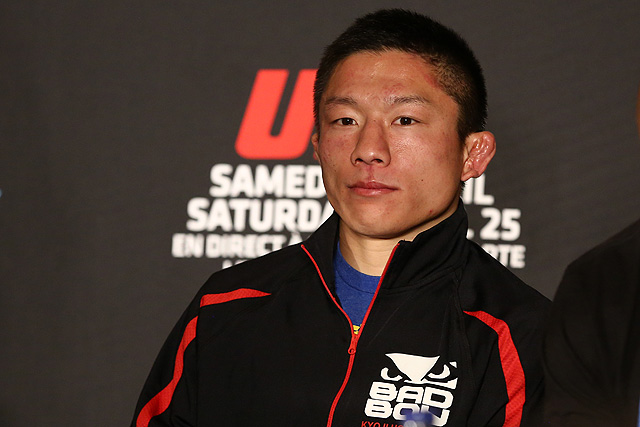 The 71st edition of Fight Nights Global — the promotion has completely dropped its alternate name of Eurasia Fight Nights — won’t air on UFC Fight Pass, and it doesn’t feature any title affairs, but there are still some prospects worth checking out. Two of those prospects clash in the middleweight division, where Vladimir Mineev meets Andreas Michailidis.

Mineev is a highly decorated kickboxer who is just starting to get his feet wet in the MMA world. The 27-year-old made his pro MMA debut in 2014, but he’s been active in the pro kickboxing circuit since 2009. The striker hasn’t settled into just one weight class, instead opting to bounce around between weights ranging from 176 pounds on the small end of the scale on up to light heavyweight at his heaviest. Along the way, Mineev has finished six opponents with his fists and two by way of submission. His kickboxing resume includes 11 knockout stoppages. Mineev scored first-round finishes in his first five MMA fights, but his best opponent in this stretch was Xavier Foupa-Pokam, a struggling UFC veteran. He added two more submission finishes before Yasubey Enomoto pushed him to the first decision of his pro MMA career. Mineev stumbled in a majority-decision loss to struggling UFC vet Maiquel Falcão in late 2016, but he avenged the loss by scoring a first-round TKO of the Brazilian in April.

Michailidis was born in Kazakhstan, grew up in Greece and eventually relocated to America. Along the way, the 29-year-old has spent time training in various martial arts under some very well-known coaches. “The Spartan” has largely worked under the tutelage of Dimitris “Mohou” Papakonstantinou, but he’s also spent time training with Antonio McKee, Quinton “Rampage” Jackson and Rafael Cordeiro. Unlike his rival in this contest, Michailidis has consistently fought as a middleweight for his entire pro career, which began in 2009. The decorated grappler scored five finishes through his first six fights, but he was stopped via strikes in his lone loss against Emil Zahariev. Michailidis faced his second setback in 2014 when he met Jason Butcher at Bellator 128. Butcher also ended “The Spartan’s” night with a knockout finish. Michailidis has rebounded to pick up four additional wins, including three stoppages, but his only seasoned opponent was Ion Pascu, who pushed the EFL Martial Arts Academy product to the scorecards.

Mineev disappointed in his first fight with Falcão, but he redeemed himself in the rematch. The Russian has an excellent striking game and enough power to finish fights. That’s bad news for Michailidis, who has demonstrated a weak chin throughout his career. The American-based fighter has to drag Mineev to the mat and turn this into a grappling affair. It’s his only route to victory.

Mineev has blazed through six different opponents with first-round knockouts. Michailidis doesn’t have the ability to withstand what the Russian doles out. The most likely outcome of this fight is one where Michailidis is left staring up at the lights.

1º Round Combat is only on its fourth event and only the second full year of its existence. The lineup for this show isn’t particularly deep, but it does include a pair of welterweight prospects, Jhonny Carlos and Handesson Ferreira, vying for gold.

Ferreira is the more seasoned veteran of the pair. The 29-year-old made his pro debut in 2013 and streaked out to nine straight wins. Along the way, he racked up five knockouts and one submission, while also capturing the Max Fight interim welterweight crown and the Jungle Fight welterweight championship. His only loss came in his 10th professional fight, when he emerged on the losing end of a split decision against UFC veteran William Macário. “Boy Doido” trains out of the Nova União camp.

Carlos debuted in 2016 and tallied one knockout, one submission and a decision victory through his first three fights. However, his competition consisted of inexperienced fighters. At the last 1º Round Combat event, he stepped up to meet Jefferson Rodrigues, who held a 6-2 mark at the time. Rodrigues finished Carlos in the first round to hand the prospect his first pro loss. The 29-year-old has since rebounded with a submission finish of seven-fight veteran Gonzalo Ascencio. “Lenhador” fights out of the Master Kombat team.

Ferreira and Carlos got off to good starts in their respective careers, but each has faltered once. The difference is that Ferreira claimed a title in a major regional promotion (Jungle Fight) and lost to a UFC veteran. Carlos hasn’t fought on such a big stage, and his loss came to a seemingly mediocre fighter. Furthermore, Ferreira’s loss was a close split decision.

Carlos already struggled against Rodrigues, who was able to finish the upstart Brazilian. Ferreira is an even bigger task for Carlos. The former Jungle Fight titleholder has the experience and the skills to defeat Carlos. The finish should come via strikes.

If you’re not ready for bed after Saturday evening’s UFC 214 stacked card, settle in for Rizin’s offering, which kicks off at 1 a.m. ET on Sunday. The lineup might not be quite as deep as the UFC’s bill, but who doesn’t want to finish off their Saturday evening with the freakishly huge Gabi Garcia soccer-kicking some poor innocent soul into oblivion while also catching a glimpse of former UFC flyweight title challenger Kyoji Horiguchi in action against Japanese veteran Hideo Tokoro? If that sounds like fun, then tune in to the pay-per-view stream right here on Combat Press, courtesy of Fite TV.

Horiguchi is one of the unfortunate victims of the UFC’s overall disinterest in its own flyweight division. The 26-year-old is a stud, but the organization let him go, despite wins in his last three Octagon appearances. Horiguchi, a member of the Krazy Bee team and a training partner of Norifumi “Kid” Yamamoto, posted an 11-1 mark with victories over the likes of Manabu Inoue, Ian Loveland, Hiromasa Ogikubo and Shintaro Ishiwatari before he was scooped up by the UFC. Horiguchi added wins over Dustin Pague while fighting at bantamweight and then Darrell Montague, Jon Delos Reyes and Louis Gaudinot as a flyweight. The three-fight winning streak inside the Octagon was enough to earn Horiguchi a title shot against flyweight great Demetrious “Mighty Mouse” Johnson. Despite being outclassed on the mat against Johnson, Horiguchi lasted until the last second of the 25-minute affair, when Johnson finally forced him to tap. While the loss ended Horiguchi’s title aspirations for the time being, the Japanese fighter went on to claim decision wins over Chico Camus, Neil Seery and Ali Bagautinov. Still, the UFC opted to part ways with Horiguchi, who returned to Japan and debuted with Rizin in a winning effort against Yuki Motoya.

The 39-year-old Tokoro has been fighting professionally since the year 2000. The veteran has always had a problem with consistency, having lost as many as three fights in a row on a couple of occasions and having never won more than four in a row. Tokoro’s most notable wins came against Brad Pickett, Abel Cullum, Yoshiro Maeda, Atsushi Yamamoto and Masakazu Imanari. He’s been on the losing ends of outcomes against the likes of Caol Uno, Kultar Gill (twice), Ivan Menjivar, the aforementioned Atsushi Yamamoto, Hiroyuki Takaya, Joachim Hansen, Antonio Banuelos, Will Campuzano, Victor Henry, L.C. Davis and Kron Gracie. The Bellator and Dream veteran has 20 submissions and five wins via knockout, but he’s been knocked out 12 times and submitted on six occasions.

Tokoro had some competitive years with K-1 Hero’s and Dream, but those years are long past. Since his 2011 bout against Banuelos, Tokoro has racked up a subpar 4-6-1 record. Now, he’s set to face Horiguchi, who is still very much in the prime of his own career. Tokoro might have been capable of an upset six years ago, but now that seems impossible.

Horiguchi is coming up in weight, which is the only factor that might work to Tokoro’s advantage. However, Tokoro relies on a hectic pace while mixing striking with takedowns and grappling. That strategy might not work against someone with Horiguchi’s speed and defensive abilities. It took Mighty Mouse, the best flyweight in the world, almost five full rounds before he could find a submission. If Horiguchi could successfully fend off Johnson for that long, he shouldn’t struggle too much against Tokoro. Meanwhile, Horiguchi has the striking ability to add yet another knockout to Tokoro’s loss column.