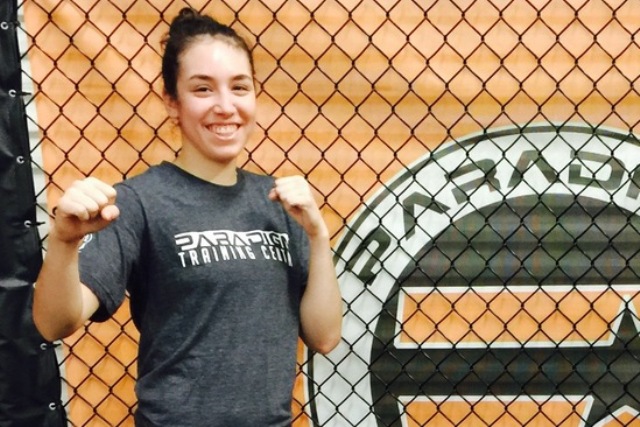 It’s interesting, the events and coincidences that lead one to their current position. Sometimes, life feels like a Rube Goldberg machine, spinning us down a path only to switch directions and take us to where we should have been all along. If you don’t let life take you, you could end up stalled, halfway, waiting for momentum to carry you where you thought you belonged.

If you remain focused on the past, you can’t move forward. And move forward is exactly what the young Itzel Esquivel is doing. At 20, she has already accomplished more than many adults twice her age.

Esquivel started her illustrious martial-arts career at the age of 3 or 4. She started taekwondo and then moved on to Kenpo karate, receiving black belts in both disciplines. At age 17, she started boxing. By 19, she was invited to try out for the Mexican National Team for the Pan-American Games.

Hopes of competing for Mexico were dashed when she made the team but wasn’t picked to go to the Pan-Am Games, but she’s twisted the pain of rejection into fuel for success in a different combat sport.

“I actually love MMA, even more than the other disciplines,” Esquivel told Combat Press. “I get to use all that I know. I get to use boxing, kicks, and I’ve started learning grappling. It’s fun to be able to do it all in one single fight; it’s not just one discipline.”

Esquivel is too modest when it comes to her assessment of her standing as a grappler. So far, in her two professional fights, the wins have come by submission. The first was a straight armbar. The second, an elbow-popping triangle armbar.

“I’m surprised and I’m not surprised that I was able to get that last one,” the young fighter admitted.

Esquivel faced Brandi Narvaez, an opponent who had a lot of attention on her. Narvaez, who had gone 3-0 as an amateur and is married to UFC vet Roger Narvaez, was making her pro debut. Meanwhile, Esquivel was making her Legacy Fighting Alliance debut. The strawweight locked in her second pro finish in the first round.

“I drilled that move over and over the week before the fight, with Leroy Vasquez,” Esquivel explained. “I was caught in that same triangle in my last fight. [Narvaez] was hovering over me, and I thought to myself, ‘This is the moment. I gotta do it.’ So I did.”

How did she end up drilling with Vasquez? She had been a boxer, training at a local gym. Her father is her coach. He also works as her little brother’s coach. The gym they were training in had a little bit of drama, so they decided to start asking around.

“We had one guy who told us about Paradigm MMA, and we went to try it out,” said Esquivel. “I had been wanting to try MMA, but boxing had been our focus.”

If her father hadn’t been willing to look around and let her try MMA, she might not have left the Mexican National Team. Then she wouldn’t have known how much she loves grappling, or she might never have found her new dream, the dream of fighting for the UFC.

“The strawweight division is the goal right now,” she said. “115 has been easy for me to cut to and I have had success in it, so the plan is to stay there. I want to keep improving so that I can earn my way to the UFC roster.”

Esquivel’s next opportunity to take another step closer to her ultimate goal will come on June 23 in her hometown of Houston. At LFA 14, she faces another debuting fighter, Maycee Barber. Barber, the co-owner of Gracie Jiu Jitsu in Fort Collins, Colo., also comes from a karate background, so it’s an intriguing match-up.

“I’ve heard she is tough,” said Esquivel. “I usually will watch video at least once. I leave it to my coaches. There wasn’t too much to watch — she knocked out her opponent in 20 seconds in her ammy debut — but it’s going to be very interesting.”

As Esquivel spoke, a smile lit up on her face. Why smile when faced with violence?

“I love the competition that it is,” she said. “A lot of people think it’s just about punching someone in the face, but it’s so much more. It’s technical. It’s strategy. You have to know your way around the body. Every fight, you’re learning something new, drill[ing] something new. Fighting in the cage gives me the opportunity to show — to prove — what I’ve learned.”

“He is starting to get taller, and I can’t beat him up like I used to. In fact, I kind of regret doing some of the things I can’t do now,” Esquivel said with a laugh. “I’m lucky that my family is so supportive. My parents have always been accepting. Of course, they don’t want me to get hurt. But my father pulled me out of soccer in high school because he said it would ruin my knees, but they are ok with me getting punched. Well, my mom doesn’t like it as much, but she comes to every fight. She is always there.”

You might be wondering about Esquivel’s first name, and you are more than likely wondering about her little brother’s name. Their family is Native American and descended from the Aztecs, so their parents decided to give their children — and their dogs, too — traditional Aztec names. Itzel is one of the variations of the name of the Aztec Goddess of the Moon. Most scholars believe that Aztec women were not warriors, unless absolutely needed to fend off attackers. However, the Aztecs do believe that childbirth was a battle, and women who died in childbirth were honored as their deceased warriors were.

In modern times, this particular Aztec woman is an extraordinary warrior. Esquivel may not have planned to be an MMA fighter, but MMA is lucky she happened into it.

Itzel would like to thank her sponsor, Loaded Pistols. She would also like to thank her coaches, Daniel Esquivel and LeRoy Vasquez, and all her training partners at Paradigm Training Center, and especially her brother, Tonatiuh. Follow Esquivel on Twitter: @Itzel_Esquivel_
Advertisement