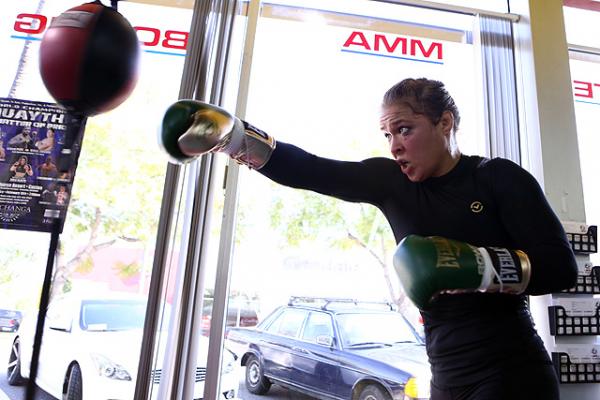 Father time is undefeated. It’s a saying that is as old as the fight game itself. And largely, it holds true. The fight game moves and evolves so quickly that as fighters get older, they don’t have the speed to outrun it anymore. There is always someone younger and faster who’s willing to be in the gym longer. An older fighter just can’t compete. It’s what happened last Friday night at UFC 207.

It began in the prelims with former welterweight champion Johny Hendricks. Hendricks himself was once the young lion running after a champion in Georges St-Pierre. At that time, not only was he knocking guys dead with his left hand but he had the wrestling pedigree to keep the fight standing up where he could deliver that fight ending blow. He also had a team that was completely focused on dethroning St-Pierre. Couple that with the time St-Pierre lost in his own evolution due to injury and you have a recipe for the king of a division to lose his crown.

Now, Hendricks is in a similar situation as the man he once chased. He split with his team from the St-Pierre fight, Team Takedown. He has struggled making weight and appears to be more interested in outside endeavors. Ironically, he has a desire to be a restaurateur. Somewhere along the line Hendricks became more interested in being Johny Hendricks in name, than in person. Once that name meant something, he forgot about the work that gave it its meaning. He’s lost three in a row, all to young fighters who are building their names and legacies. All chasing what Hendricks once chased. Greatness.

Neil Magny in particular is a guy who was never destined for greatness, necessarily. He put in the work and when it came time to meet Hendricks, he was ready.  There is a sentiment out there that Hendricks won the fight. Even if that were the case, there was a time that a guy like Magny could not have kept things close with Hendricks. While you have to credit Magny’s progression, a case can be made for Hendricks regression or at the very least, stagnation.

On the main card, we found Dominick Cruz. Cruz similarly to St-Pierre had found his groove as the best fighter in his division. And then injury hit. At the time his injury came, he was outpacing his division and evolving at a much faster rate. The goal of a fighter is to figure out his division, evolve at a faster pace and get out of the game before the rest catch up or the fighter slows down. Cruz looked to be on that pace but when injury hit, everyone had spent so much time trying to figure him out that the byproduct was evolved fighters who could match his technique.

This started with T.J. Dillashaw, a former Team Alpha Male fighter who learned how to beat Cruz by mimicking him to help Urijah Faber train for him. Dillashaw got so good at mimicking him that he adopted his style in part. Dillashaw’s help couldn’t help Faber overcome his own diminishing skills. But Dillashaw seemed ready. He dismantled Renan Barao twice in Cruz’s absence and was waiting for Cruz’s return armed with both an understanding and mastery of Cruz’s style.

Dillashaw didn’t have enough to beat Cruz in a close fight but someone with a close eye on the fight and experience sparring with Cruz-clone Dillashaw was Cody Garbrandt. Garbrandt was younger, had solid wrestling and dynamite in his hands. He was able to match the output of Cruz and landed more significantly than the champion, cracking and clowning his way to gold.

The night ended with women’s MMA’s past and perhaps its future as the UFC’s first women’s bantamweight champion Ronda Rousey was dismantled — and in all likelihood, retired — by current bantamweight champion Amanda Nunes. This fight was a story of evolution as well. So much so that we really should have seen the writing on the wall a long time ago. Rousey fought Miesha Tate twice. Tate started out like all the others, a first-round victim. However, Tate’s second crack at Rousey lasted three rounds. At closer examination, it could have been surmised that Tate was evolving and Rousey wasn’t.

Against Holly Holm, Rousey was exposed, yet some dismissed it as either a “bad match-up” or a “byproduct of a busy schedule.” In reality, Rousey was nowhere near Holm in the striking department. Not only that, but she stuck with a very flawed coach who stagnated her growth. The real truth behind all this may be that Edmond Tarverdyan knows that the more Rousey knows about striking, the more she’ll understand he shouldn’t be the coaching her on it.

Now let’s get to the Nunes fight and what is troubling about Rousey. Looking at this fight from 30,000 feet, we know that Holm defeated Rousey, Tate defeated Holm and Nunes defeated Tate. Now MMA math is very flawed and that’s not what we are doing here, it’s more a question of Rousey looking at these three fights and saying to herself, “if Tate could withstand Holm’s striking and I couldn’t, what makes me think I can handle the striking of someone who Tate couldn’t withstand?” In Rousey’s defense, she may have just said that there is way too much ground to cover to get caught up to these girls and I have to focus on fighting my fight and hope that’s enough. There’s logic in that, however the game passed Rousey by. The game is a runaway train and it doesn’t wait for you and it very rarely gives second chances to those who don’t earn them.

Rousey, Cruz and Hendricks were all great champions. All three have a legacy to look back on, but in the unforgiving game of MMA, if they don’t evolve moving forward, looking back on greatness will be all they can do.