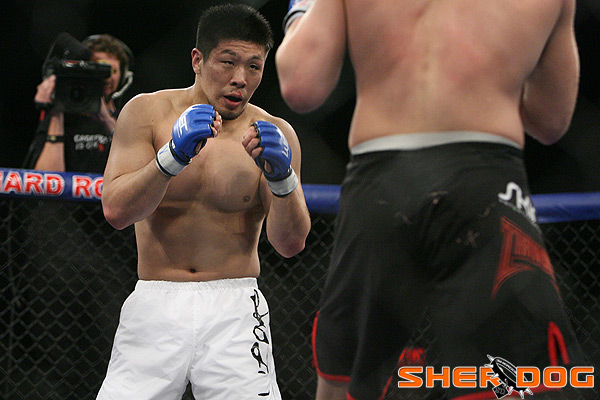 Pancrase, one of the world’s longest-running MMA promotions, returns on Sunday, Oct. 2, for Pancrase 281. The event takes place just two weeks after the promotion celebrated 23 years of operation on Sept. 21.

The Japanese fight scene has experienced much change since 23 years ago when Pancrase first began its journey to becoming one of the premier promotions in the world. The newer Pancrase, which is based on the western style of MMA that features the unified rules, weight classes and a cage, has become a stage for many of Japan’s best fighters outside of the UFC. With the downfall of Pride, Dream, K-1 Hero’s, World Victory Road and many others before and after, the Japanese market is void of a true top-tier promotion. Former Pride boss Nobuyuki Sakakibara set out to change that in 2015 with the Rizin Fighting Federation, his new concept of a worldwide grand prix featuring fighters from the world’s top promotions. Pancrase, meanwhile, has changed its model to incorporate a new emphasis on international fighters and developing homegrown talent. The move has paid off by creating a new generation of mixed martial artist, turning once forgotten fighters into promotional favorites and, most importantly, putting on exciting fights for the fans in Japan while broadcasting events on its new international platform through UFC Fight Pass.

The main event of Pancrase 281 features two of Japan’s top welterweights meeting for the coveted King of Pancrase title. The champion, Akihiro Murayama, made the move from Shooto to Pancrase in 2012 following a submission win over UFC veteran Keita Nakamura. The former Shooto Pacific Rim champ became one of the many fighters switching from one promotion to another between the consensus top three Japanese promotions — Pancrase, Shooto and Deep. Murayama has put together a stellar record inside the promotion, winning seven of his 11 bouts with just one loss, which came in his first attempt at the welterweight King of Pancrase title against Gota Yamashita at Pancrase 260 in 2014. The Gutsman product has picked up wins over UFC vet Daniel Roberts, multiple-division King of Pancrase champion Yuki Kondo and Bellator veteran Thiago Gonçalves. He also has scored two big knockout victories over former champion Shingo Suzuki. One of those knockouts came in the fourth round of his most recent outing to win the title at Pancrase 276. The 36-year-old puts his title on the line against WEC veteran Hiromitsu Miura.

You may recognize Miura’s name from his crazy back-and-forth fight with former UFC interim welterweight champion Carlos Condit at WEC 35. Miura shocked many when he took the fight to Condit as a more than 5-to-1 underdog. The fight went down as one of the best fights in the storied promotion’s history, a history that includes such fights as Anthony Pettis vs. Benson Henderson and Olaf Alfonso vs. John Polakowski (for those truly hardcore fans out there). Miura left the sport shortly after the “Fight of the Night” showing against Condit. Miura, 35, returned in 2015 following a brief foray into professional boxing, where he put together nine wins in 10 fights. Miura picked up knockout wins over Toshikazu Suzuki and Yuta Nakamura in just two months time in his return to Pancrase. A series of unfortunate events have kept Miura outside of the cage so far in 2016. An injury scrapped his fight at Pancrase 276 and a weigh-in controversy ended his bid to fight at Pancrase 278.

In the co-headliner of the evening, former middleweight King of Pancrase Ryo “Rocky” Kawamura takes on the streaking Yuki Niimura for the vacant middleweight belt. Kawamura has a storied career inside the Pancrase ring and cage. He made his name in the promotion with wins in exciting wars against former UFC fighter Keiichiro Yamamiya and Pride FC veterans Daniel Acácio and Hiromitsu Kanehara. Kawamura became a popular fighter in Japan due to his do-or-die style that led to many exciting victories. He became a mainstay in the now-defunct Sengoku promotion and has fought the likes of Bellator light heavyweight Muhammed “King Mo” Lawal and the late UFC heavyweight champion Kevin Randleman. There is a reason Kawamura recently changed his ring name to “Rocky” — it is nearly impossible for him to have a boring fight, even against some of the top competition in Japan. Niimura is also known for exciting fights. The Deep veteran moved to Pancrase in 2015 when the promotion signed a plethora of top Japanese talent. Niimura will bring the fight. Eight of his nine victories have come by knockout.

Satoru Kitaoka returns to the promotion following a successful title defense against Kota Shimoishi at Deep 76th Impact. Kitaoka is the former Sengoku lightweight champion and the current Deep lightweight champ. He fell short in his last Pancrase outing against UFC veteran Kazuki Tokudome in his bid for the lightweight King of Pancrase title at Pancrase 271. He welcomes 27-year-old Brazilian Leandro “Macarrão” Mafra, another UFC veteran, to the Pancrase cage. The Chute Boxe product Mafra was cut from the UFC following a loss to Stevie Ray at UFC Fight Night 72. Mafra had mixed results with the world’s top promotion. He picked up a win over Cain Carrizosa after getting submitted against former top-10 welterweight Rick Story in his UFC debut. Mafra returned to the win column with a decision victory over Anthony Njokuani at FFC 25 in June.

The Pancrase 281 fight card is truly one of the best the promotion has put forward in this new generation of events. The fights feature talented prospects, former champions and newly signed talent making their promotional debuts. One of those former champions, Mamoru Yamaguchi, is a former two-division Shooto world champ and one of the pioneers of the flyweight division. Yamaguchi was ranked among the top five flyweights for nearly six years before tasting defeat against UFC title challenger Jussier “Formiga” da Silva in 2011. Yamaguchi has 11 knockouts and four submissions in his 29 career wins. He fights undefeated Brazilian Rogério Bontorin in his Pancrase debut. Bontorin earned his place in the promotion by winning a four-man, one-night tournament at Immortal FC 5: Road to Pancrase. Bontorin has finished nine of his 10 wins by submission.

Dream and K-1 Hero’s veteran Atsushi Yamamoto debuted with the promotion in 2012 as a top-flight flyweight. The 35-year-old has had mixed results since making the move following an eye injury in 2011. Yamamoto earned a shot at Kiyotaka Shimizu’s title with victories over Yasutaka Koga and Daichi Kitakata, but an orbital bone injury kept him outside of the cage for over a year. Yamamoto fell short in his bid for the title when Shimizu knocked him out in the first round at Pancrase 257. Since the title loss, Yamamoto has won and lost. His most recent victory came against Yusuke Ogikubo in his last bout at Pancrase 277. The Krazy Bee-trained Yamamoto meets Pancrase Neo Blood tournament champion Shohei Masumizu. “Convoy” finished three of his seven career victories. His lone defeat came against Bellator bantamweight title challenger Rafael Silva.