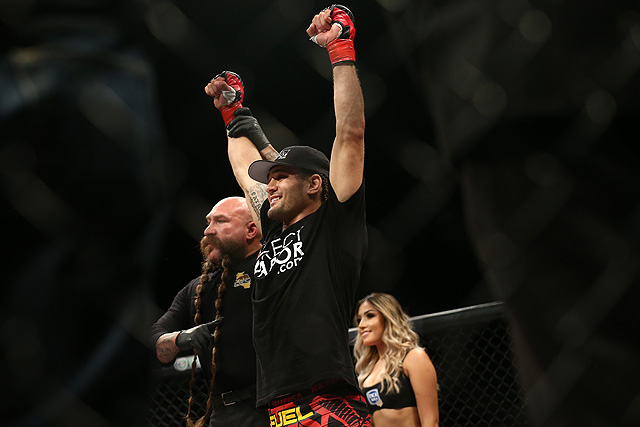 More often than not, athletes are in an unexpected place when they get “The Call.” They might be in the shower. They might be enjoying a night out with friends. They could be working at their day job. In the case of Resurrection Fighting Alliance lightweight Christos Giagos, it ended up being the latter.

“I was in the office at my dad’s restaurant eating some food,” Giagos told Combat Press. “I had some missed calls and a bunch of texts from my manager in all capital letters, asking if I had a passport. I was offered a fight in Brazil for the UFC, so that was pretty exciting news.”

Giagos, who holds a 12-5 record as a professional, made his UFC debut in October 2014 at UFC 179, where he was submitted by Gilbert Burns. However, Giagos rebounded by submitting Jorge de Oliveira in March 2015. Unfortunately, his lone UFC victory was the only fight his father did not see in person.

“My dad is the reason I started playing sports,” Giagos said. “He would always come to my fights and come into the cage after I would win, and I would always see how proud I made him.”

Giagos played football until his senior year of high school, when he joined the wrestling team and staged after-hours “Fight Night” cards with his friends. They would emulate fighters like Frankie Edgar, B.J. Penn and José Aldo.

Giagos had his first MMA fight after a year of training and made his professional debut in 2010. He splits his time between Black House MMA, Team Victory and One Jiu Jitsu in California.

Giagos described his time in the UFC as “amazing,” though it ended after he lost his third fight in the organization to Chris Wade in 2015.

“It’s so well organized, but it was a little nerve-racking at first,” he said. “I was on the same card as fighters I grew up watching, but once you’re inside the cage, it’s like any other fight.”

Prior to joining the RFA and the UFC, Giagos had extensive experience competing on the regional MMA circuit for groups like Respect in the Cage and Lights Out Promotions. He believes the regional MMA scene is a great starting point for fighters.

“It’s very easy to match people up for your style and then you can branch out into other styles,” Giagos said.

After engaging in a little bit of partying following weigh-ins for a couple of his UFC fights, Giagos has matured and now takes his approach to fighting more seriously. He’s happy to be back in the RFA, where he won the organization’s lightweight title in his promotional debut in 2014. Now, he is set to face Arthur Estrazulas at RFA 42 on Friday, Aug. 19.

“He has a lot to prove,” Giagos said of Estrazulas. “This is his biggest fight, and he needs to prove he belongs. He’s a good fighter. He has a black belt in jiu-jitsu, so I’m sure he’ll be looking to take me down. I’m expecting a fight.”

When Giagos steps into the cage at RFA 42, his father will be there. Giagos has served customers in his dad’s restaurant, but now he expects to serve up a different dish. He’s ready to deliver another victory for his dad.