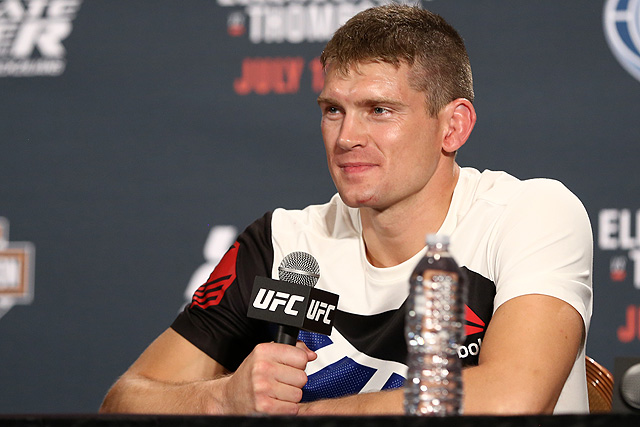 Everyone needs to be grounded at some point during the workweek. Finding that place where a person can relax, focus, recharge and bring life back into perspective is one of the most important practices for maintaining a healthy mind. Whether it’s hiking, yoga, fishing, reading a book or simply sitting in a park, everyone needs something to help get the mind off the day-to-day rigmarole.

Professional athletes are notoriously guilty of not getting focus time worked into the schedule. Sitting at home playing video games or partying with friends is not always the best way to focus. When a person’s job is to be highly competitive, highly competitive activities do not help alleviate that stress. However, there are some out there that don’t let the fight game sit in their heads.

Stephen Thompson may be one of the most accomplished kickboxers in the world. He may be one of the greatest competitors in the UFC’s welterweight division, too. However, the real Thompson, as a person, is a lifelong karate — not just the sport, but the art — practitioner. He has been teaching others this art for over half of his life.

“I teach every day,” Thompson told Combat Press. “That’s my other job and my first love. I’ve been doing that since I was 15. A lot of MMA fighters just train, eat, sleep and train some more. Training keeps me grounded and focused. You don’t want to be thinking about the fight all the time. You end up worrying and thinking about it too much and overanalyzing things. Teaching karate keeps me focus. I teach from about four to eight every night, and I work Monday through Saturday. And I work my training regimen in between teaching classes.”

Anybody who has spent time around fighters during camp knows that Thompson is spot on with his assessment of the typical fighter. Some are so focused on being the best that it consumes them almost to the point of diminishing returns. It’s the guys like Thompson, who has a combined record of 70-1 in the professional kickboxing and MMA arenas, who are able to find that place of peace.

“I wouldn’t have actually become the fighter that I am if I wasn’t teaching martial arts,” Thompson said. “I’m a better fighter after teaching. You have to understand the technique well enough to teach it, and, especially [teaching it] to kids, you have to understand it more. When you understand it more, you can apply it in your sparring and your training. Stuff happens all the time where I’m showing a technique and something just clicks. It definitely helps me a lot, man. I’m full-time martial arts.”

He has never been stopped. He has earned four fight-night bonuses in the UFC. Nobody can ever doubt Thompson’s martial-arts prowess. This was very evident in his last fight against a man that many once thought was truly unstoppable.

Thompson’s last fight was at UFC Fight Night 82 in February against the heavy-handed former welterweight champ Johny Hendricks. Hendricks previously had only lost by decision, and two of those losses were UFC title fights. Things did not go well for Hendricks, who had spent nearly a year on the bench. At 3:31 of the first round, Thompson scored a TKO finish. It was a huge victory for the rising contender.

“If you’ve seen Johny Hendricks once, you’ve seen him a hundred times,” Thompson said. “I actually drilled a lot for this fight. I did a lot more drilling than sparring. I know he’s a tough guy, and I was ready for a five, five-minute round war. He brings a big left hand, big right hand, tries to take you to the cage and get you down, and I was just ready for everything he had. It was almost surreal after the fight, finishing somebody who’s never been finished before and is a former welterweight champion. I had a big smile on my face.”

It is rare to find an image of Thompson without a smile on his face. However, when he found out about his next match-up, he wasn’t exactly smiling inside. While it seemed like a logical step for Thompson to get a title shot after handily disposing of the former champ — a feat the current champ was not able to accomplish — the UFC had different plans. Four weeks after the win, the South Carolina native found out his next opponent was not a champ, but a former training partner who actually lost to the champ last summer.

A few years ago, Thompson spent some time at the famed Tristar Gym in Montreal. One of his main training partners was Rory MacDonald. MacDonald’s last fight ended in a fifth-round TKO at the hands of UFC welterweight champ Robbie Lawler at UFC 189. While the performance was widely considered the “Fight of the Year,” it was an outcome that Lawler was not able to achieve over Hendricks. Regardless, when everything shook out earlier this year, MacDonald still ended up sitting above Thompson in the rankings.

“I know that I have to face Rory, but I was expecting a title shot after that, especially since Rory fought for it back in July,” said Thompson. “With me being the No. 2-ranking guy and finishing the former world champion, I figured they would give it to me. Sometimes, I guess you’ve got to go out there one more time and prove that you deserve that title shot.

“Me and Rory kind of go back, and we’re friends, but we know, at the top of the game, we might have to face each other. So we’re just going to go out there and do our thing. We’ll be buddies before, and we’ll be buddies after the fight. It’s sparring. You spar your buddies every day, and sometimes things get overheated. It’s just going to be a little more intense this time.”

This Saturday night, at UFC Fight Night 89 in Ottawa, Ontario, Canada, the former training partners will face off. The winner will get the next title shot after Lawler faces Tyron Woodley at UFC 201 in late July. This is a shot that Woodley has been sitting on for a year and a half.

“To be honest, I think Robbie Lawler has got this fight,” said Thompson. “I mean, Tyron Woodley is a tough guy, but being out of the Octagon all this time, there can be cage rust and he may not be as comfortable. Robbie Lawler is a big [welterweight], a big striker, and has great takedown defense. I just think Tyron is going to have a tough night with him.”

The long layoff for Woodley was definitely a strategic choice that the 34-year-old former NCAA Division I wrestler had to make. He handed Kelvin Gastelum his first loss in January 2015 and was supposed to face Hendricks in October, but Hendricks couldn’t make weight and pulled out. The UFC said Woodley would get the next title shot, but Lawler was already slated for a rescheduled bout with Carlos Condit, which got moved from August to January. This means that when they face off at the end of July, Woodley will have spent a full 18 months without a single fight.

“You’ve got to put yourself in his shoes,” said Thompson. “If the UFC tells you, ‘Hey, you’re going to get the next title shot,’ you say, ‘OK, I’ll wait over here.’ You don’t step into the cage against somebody else when the UFC says you have the next shot. Anybody in his shoes would have done the same thing. I was never promised anything, which is why I’m stepping in there with Rory. I want to be the best in the world. I’ve got one guy above me and that’s Rory. I really want to prove to the fans and the UFC that I deserve it.”

While many of the UFC divisions are in flux right now, the welterweight division has a pretty clear-cut path. A storm is definitely brewing, though. Outside of the MacDonald-Thompson-Woodley stack, guys like Demian Maia, Neil Magny and even Condit are lining up for a shot. However, if a win over MacDonald does not earn Thompson the next shot, there is a grave injustice in this world. He has only lost once, never been stopped, is the second-ranked welterweight contender, and just handed Hendricks his first loss. All of this is leading toward a tremendous build-up toward Saturday’s main event. Even with all the craziness around his next battle, Thompson stays grounded with his teaching. This is obvious in his general demeanor. He still has a light-hearted persona. He is just trying to have fun.

“There’s a lot of hype around this. I know eventually Rory is going to want to take me down. He’s the best well-rounded fighter I’ve ever faced in the UFC. He’s got good basic boxing [and] kickboxing, and he’s bringing in a lot of karate fighters. Man, it’s going to be exciting. Kicking, punching, and I’m going in for a five five-minute-round war. I’m not necessarily always looking for the knockout, even though it does happen, but I think it’s because I see a lot of things other people don’t in training. The hook kicks, the spin kicks — that’s my style. And I’m going out there to put on a show for the fans.”

Thompson would like to thank his Lord and Savior, his dad who has been his guidance through his whole journey, and his new management team at Paradigm Sports Management. Follow Stephen on Twitter: @WonderboyMMA
Advertisement