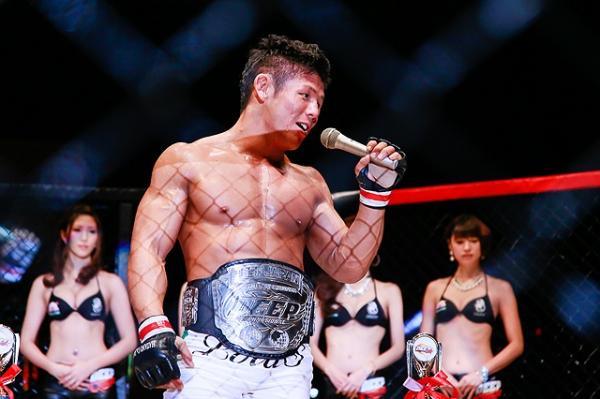 Out of Obscurity: Legacy FC 56, Thunder Fight 7 and Deep 76 Impact

Legacy Fighting Championship may be lagging behind fellow developmental promotion Resurrection Fighting Alliance in the number of potential UFC prospects it currently boasts, but the promotion’s 54th event features one of its most promising fighters. The organization’s bantamweight champion, 22-year-old Manny Vazquez, is set to return to action just over four months after claiming the vacant belt. The youngster will put the strap on the line against veteran Steven Peterson.

Vazquez, who made his pro debut in 2013, was viewed as little more than another hurdle for the previously unbeaten Ricardo Ramos when the two men locked horns at February’s Legacy FC 51 event. Instead, Vazquez landed the upset with a choke submission of Ramos in under two minutes of the first round. The Illinois native had entered the contest with an 8-1 mark and was just one fight removed from a decision loss to the unheralded Chris Dunn at Turf Wars 27. Vazquez is a threat on the mat, where he has finished five of his opponents via submission.

Peterson should be a familiar face to Legacy fans. The veteran fighter, who sports a very distinct Superman tattoo on his chest, has made nine previous Legacy appearances, including a headlining slot at Legacy FC 46. “Ocho” has also competed twice under the Bellator banner, where he sports a 1-1 mark. The 26-year-old’s Legacy record stands at 7-2, and he is currently enjoying a five-fight winning streak across the XKO and Legacy promotions. The Octagon MMA fighter has four wins by some form of knockout and five victories via submission. He has been finished with strikes, but never by way of submission.

Peterson is a tough fighter who has managed to keep fights close even in most of his losing efforts. His ability to avoid submissions will come in handy against Vazquez, but Peterson needs to demonstrate more consistency. He’s on a five-fight run, but that is the longest streak of his career.

Vazquez really impressed with his quick finish of Ramos, a fighter with a strong grappling game of his own. The young fighter has a promising career ahead of him, but his loss to Dunn is still worrisome. If he can drop a decision to a mediocre fighter on a small regional show, he could struggle against a fighter like Peterson, who has weapons at his disposal wherever the fight goes and is quite capable of pushing opponents to their limits.

Peterson’s either going to succumb to a quick submission or he’s going to take Vazquez to task for a full five rounds. Vazquez doesn’t yet have the experience to consider him a lock in a grueling title contest like this one. Peterson will end Vazquez’s momentum and capture the Legacy bantamweight crown with a grinding decision win.

Anyone remember Paulo Thiago? There was a point when this Brazilian police officer and veteran fighter was considered a threat within the UFC’s welterweight division. That was in 2010. Now, he’d probably be happy just to get in the cage and fight. His next opportunity, assuming nothing goes wrong between now and then, comes on Saturday at Thunder Fight 7. Thiago will provide a tough test for undefeated prospect Markus “Maluco” Perez. The promotion’s middleweight title is up for grabs when the pair meet.

Thiago hasn’t seen action since 2014, and he hasn’t seen the win column since 2013. The Brazilian elite special forces officer kicked off his lengthy Octagon tenure in 2009 after a 10-0 run on the regional circuit. He stunned UFC fans with a first-round finish of Josh Koscheck. Thiago lost his second UFC fight to Jon Fitch, but rebounded with victories over Jacob Volkmann and Mike Swick to begin flirting with title contention. It was a quick tumble from there, however. He suffered losses in seven of his next nine outings, leading to his departure from the UFC. He hasn’t fought since his 2014 loss to Sean Spencer at UFC Fight Night 51, but it hasn’t been for lack of trying. He was forced out of a May 2015 bout at Rebel FC 3 due to an injury and then ended up hospitalized in April, when he was due to appear on the Akhmat Fight Show 18 card. The veteran holds black belts in Brazilian Jiu-Jitsu and judo. He has submitted eight opponents, but his victory over Koscheck proves that Thiago can also finish fights with his hands.

Perez isn’t a complete stranger to UFC fans either. The 28-year-old appeared on The Ultimate Fighter: Brazil 3, where he suffered a first-round submission loss to Guilherme Vasconcelos. It’s the only blemish on Maluco’s record, but it came in an exhibition bout, so he remains officially undefeated. Perez debuted in 2013 and has amassed an impressive set of stoppage wins that includes a knockout, two TKOs and two submissions. His most recent finish came via a spinning back elbow against Fabricio Almeida Goncalves.

Perez is going to find his best chances for victory on the feet. Despite Thiago’s long list of defeats, he has only been stopped twice, and both times it was by knockout. It’s doubtful that Perez can outpoint his veteran opponent to take a decision nod, but he can target Thiago’s body and test the UFC vet’s chin. If Maluco can’t keep the fight off the ground, then he’s doomed.

Thiago is facing a bit of ring rust and injury concerns following his long layoff. The biggest struggle for him might be what comes before the first punch is thrown this weekend. He’s been forced to pull out of numerous fights, and there’s always the chance that he doesn’t make it to the cage on Saturday. However, if he is healthy on Saturday, he provides an enormous test for Perez, who couldn’t kickstart his UFC career while on TUF.

Perez has the power to finish off Thiago, but he doesn’t have the experience. Thiago’s status as an accomplished UFC fighter could be an intimidating cloud over Perez. The up-and-comer couldn’t make it past Vasconcelos in the TUF competition, which suggests that he’ll struggle against Thiago, who should be able to take the fight to the mat and wrap up Maluco for the submission finish.

The 76th edition of Deep’s Impact series features the opening round of an interesting strawweight grand prix that features the likes of Horiyuki Abe and Sota Kojima, but there are also two titles on the line at the event. Tatsumitsu Wada and Yuya Shibata are set to vie for the 125-pound title, and Satoru Kitaoka is scheduled to defend his lightweight strap against Kota Shomoishi. It’s the latter of these battles that will serve as the evening’s headliner.

Kitaoka is the long-reigning lightweight king of the Deep organization. He won the belt in 2013 with a decision win over Daisuke Nakamura, and he has notched three subsequent title defenses, including one victory by submission. The grinding fighter is a black belt in Brazilian Jiu-Jitsu and judo. In addition to 17 submission victories, the 36-year-old has scored 20 decision wins. He has also fought to nine draws and lost eight decisions. Meanwhile, he has never scored a finish via strikes. He has been knocked out six times. The Lotus product traveled to Pancrase for his most recent outing, but his attempt to capture the lightweight King of Pancrase was thwarted by Kazuki Tokudome, who knocked out Kitaoka in the fourth round.

The 28-year-old Shimoishi has 19 fights under his belt with only three losses. After making his debut in 2008 with the Powergate promotion, “Harato” spent much of his early career with Shooto, where he suffered all three of his career losses. Following the third of those defeats, Shimoishi moved to Deep, with one Pancrase stop sprinkled in. He has already scored a victory over UFC veteran Yoshiyuki Yoshida. The Shooto Gym Blows fighter has five submission victories and three wins via strikes.

Kitaoka has long been vulnerable to strikes. Shimoishi lacks significant knockout power, however, which might be the determining factor in the outcome of this contest. Kitaoka has held a firm grasp on the lightweight title since claiming it, and that doesn’t appear ready to change now. Yes, Kitaoka is aging, but he’s still a strong wrestler with a grinding approach that’s capable of stifling Shimoishi’s game. The challenger has been to the scorecards in his last four outings, and he’s bound to land there again. The difference this time is that Shimoishi won’t have his hand raised.